Behind the Idea: a Trump VS Biden game with a data surprise

The problem of conducting survey is that not all respondents will be entirely honest about their personal preferences, sometimes in an effort to avoid conflict, sometimes to avoid being labelled as the ones with the 'unpopular opinion.' But a game in which you can literally punch that unpopular opinion in the face? That, respondents can do very well.

At some point before the US presidential elections, Wildbytes figured that gamifying a survey would be more effective than simply asking people what their preferences were. And so they created KO Campaign, a video game in which players can punch either Biden or Trump based on opinions voiced during the presidential campaigns, thus gathering actual information about where the elections were indeed going.

It's just so brilliant we'll let the pros at Wildbytes speak for it themselves. We got in touch with Wildbytes Managing Director Daniel Torrico to get Behind the Idea that brought to life such a wonderful and irreverent campaign.

Our client wanted to create a gamified survey to forecast US election results that could be connected with live events like the debates and townhalls that occurred during election season. Surveys were carried out in the months leading up to the election to try to gauge where voters’ intentions were heading. The client’s goal was to find new ways to gather actual voting intention data through gaming after the polls failed to predict the result of the 2016 presidential election.

We simplified the original idea to create a stylized Punch Out mobile game that can be played everywhere and is updated with the candidates’ platforms as well as current election current topics. We contextualized the game in a newsroom-style TV show, to mimic the real debates.

The concept is a political call to action to players' most uninhibited side. For many years, traditional surveys have managed to collect relevant data and results to facilitate decision-making. However, the influence of technology and the digital world has made it more difficult in recent years to gauge people’s opinions.

The app places Biden and Trump in a “live” TV event that takes place in a set similar to that of the election debates. The anchor launches topical questions, including things such as the coronavirus pandemic, climate change and more, and candidates respond based on their campaign platforms. Once the presentation is made and the candidates begin to outline their key arguments, the player has the possibility of hitting either of them with as many 'hits' as possible for a limited time if they don’t agree. The scrap isn’t among the two candidates but is rather between the player and the candidate they most disagree with, a choice that informs results at the end of the game that displays where players’ opinions lie.

These results are defined by which candidate has accumulated more “punches” throughout all the games played worldwide, allowing the app to conclude that the candidate with more punches is less popular and is less likely to win the election. The breakdown shows how frequently each candidate has been chosen by players as the least desirable, with data that mirrors public sentiment and forecasts the winner of the election. It is also a great stress reliever in difficult times.

We strove to find a balance between serious topics such as the US political situation with playful and light-hearted gameplay and cartoonish 3D characters that model the candidates’ facial expressions. 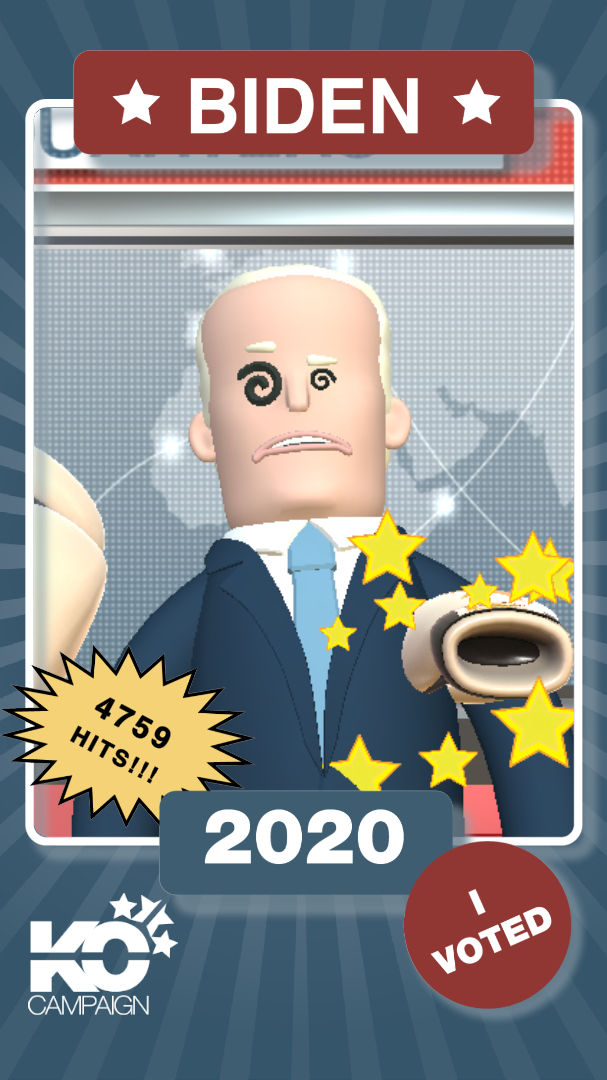 What is one funny or notable thing that happened during the production of the work?

An ever-changing reality during the campaign pushed our creative team to change the pipeline several times. For example, we started creating a Kanye West 3D character because he appeared to be an option for a while. Additionally, we always had a plan B for Biden with a Hillary Clinton 3D character also ready to be played at any moment should she jump into the presidential contest.

What’s the main message of the work and why does it matter?

Video games are a great tool to collect relevant data from public opinion in a wide range of fields from marketing to politics and more because of its increasing omnipotence in our lives. We see this as only the starting point for a new and powerful marketing tool for data gathering. We believe this kind of game offers a less analytical but more instinctive and emotional way to shed some light on the public opinion of any situation, in this case the election results. Although there are several studies that analyze the interactions of the candidates to know which of the two generates more positive responses, these are only approximate because it is difficult to correctly interpret millions of messages. With the KO Campaign, however, opinions of the users can be measured mainly against concrete facts, which is why we proposed a slightly more controversial approach to the content in order to elicit a more visceral reaction from the public.

What is one unique aspect of the work?

The game is designed to be updated in real time. As new events cycle in and out of the headlines, the game’s debate dialogue also  changes based on the current events. We also connected the game to the real debates so the 3D candidates’ opinions could change in real time. This sense of ephemerality that only a real time event can offer was a push factor that increased interactions by a significant margin. The game also features different items the player can wield that are symbols of this election and period of time. Users can thump the candidates with a COVID mask, a holy book, and a literal dog whistle. These items are meant to help people make light of some of the heavier topics they currently represent. 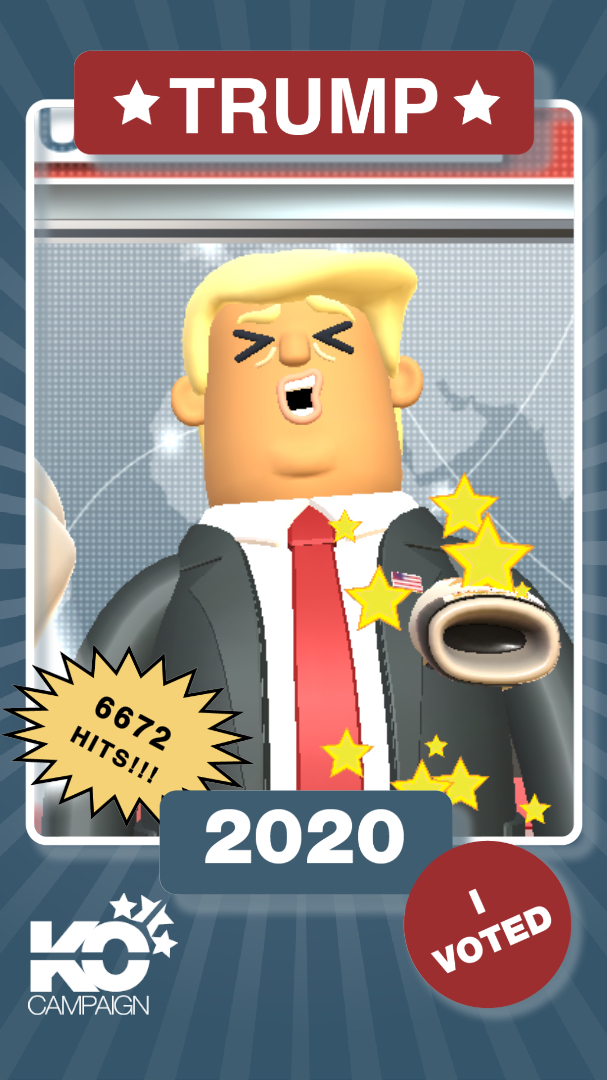 The project took around three months to complete, from concepting the idea to the final delivery. It was a big challenge. The game was evolving along with the quickly changing news cycle during the production process,  with a multidisciplinary team of creatives, developers, testers, and of course the client all highly involved from the beginning. If a candidate said something new or made a major change in their platform, the game would update to correspond with this as well. Major changes and improvements occurred during the process with the aim to get the best, most accurate results, and we believe that this real-time component could open the gateway for more similarly unique methods of relevant data collection.

The KO Campaign demonstrates the client’s strong commitment to innovation with new approaches in data collection that can create fun and unique marketing opportunities. This project has also been remarkably effective at showing us how digital gamified marketing experiences can impact on live events, a connection which can lead to even greater creative marketing exercises for the future.

Creativity, production and development by Wildbytes.

Rewarding curiosity with crackers and a bottle of gin - #BehindTheIdea

Christmas crackers are the prime symbol of festivityat every Christmas table celebration. And you certainly can't reject a good bottle of gin in full-on winter. What do you get when you mix the two? After a year like no other, and to ensure...