In the lead-up to Christmas, charities often compete for attention, making the sector incredibly crowded all of a sudden. It was in this occasion that Born Free and Engine came up with a brilliant, yet painfully truthful campaign: Nature's Closing Down Sale.

You can spot a brilliant tone of voice from miles away, and there's no doubt that this incredibly compelling ad strikes the right tone with bittersweet irony and boldness at the same time. By combining humour and the horror of the animal welfare crisis portrayed, the film below will leave you utterly speechless, resulting in what is possibly one of the most brilliant campaigns from a year like no other.

For this Behind the Idea, we reached out to Engine creative directors Katy Hopkins & Steve Hawthorne to understand what brought such a compelling campaign to life.

We were briefed to encourage people to adopt an animal through the Born Free Foundation in the run up to Christmas.

The charity sector is crowded at the best of times, but in the run up to Christmas, in a year when charities are more desperate than ever for donations, we had to do something really different to stand out. We decided to focus less on Christmas and more on disrupting the ‘SALES’ advertising that takes over in the weeks around Black Friday. This approach was fresh for the charity sector so it was good for timing. Unfortunately it was also appropriate - wild animal populations have fallen 70% since 1970, so the classic sales phrase of ’when they’re gone, they’re gone’, couldn’t be more apt. 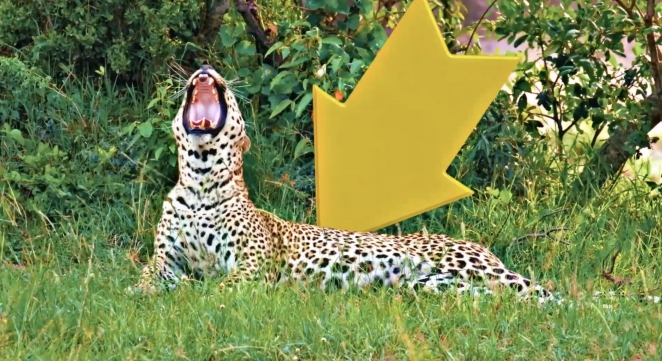 We needed to work out how best to get that idea ‘out there’ for a very limited budget, while acting just like a regular retail brand launching a sale. So as well as creating a launch film which parodies classic ‘sales’ ads we created fly posters, OOH and a digital ‘pop up store’ on Instagram – featuring a grid of 12 shoppable Instagram posts.

Creatively, the biggest challenge was to summon up a look and feel for the campaign that both borrowed from the ‘sales’ ads that we were parodying and also stood apart from them. We managed to achieve that by combining visual cliches like starbursts and arrows with the world of wildlife photography and filmmaking. The mash-up of these two worlds created something visually quite striking. The other big challenge was budget. We needed to produce the work as cost-effectively as possible for the charity, so relied on lots of favours and good will from lots of incredibly talented people to make it happen. 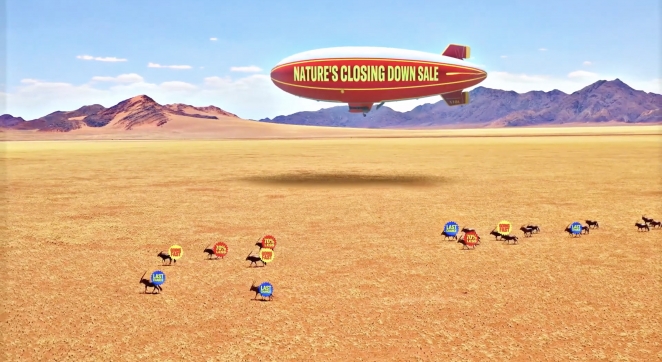 The casting of our lead character in the film was tricky. We had to pick someone who was a great actor, but who didn’t overwhelm the part. Getting Harry Peacock on board was a huge coup. The only thing with him on set was that in lots of the takes he was just too funny. We were trying to strike a balance between humour and horror which lures the viewer in, then shocks them as we reveal the reality of what we’re talking about.

The main message of the campaign is that if we don’t take action NOW to save endangered animals it will literally be too late. We know it’s hard, because people are bombarded with messages of doom and gloom. But if we just bury our heads in the sand the chance to help will be gone. 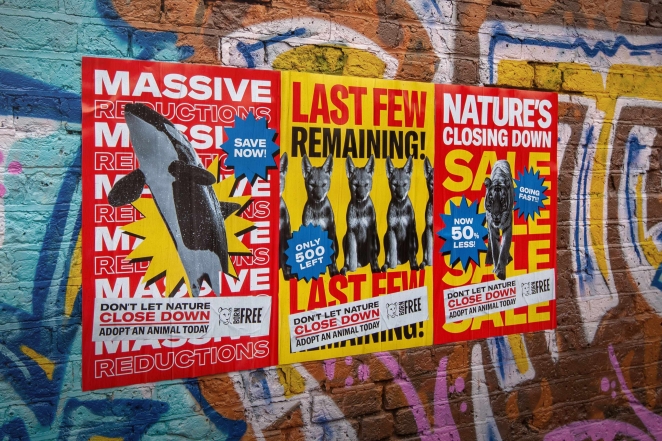 We had to move incredibly quickly. Especially once we made the call to launch on Black Friday to make the most of our ‘sale’ theme. It was about 8 weeks in the end from brief to launch. We’re still trying to catch up on sleep now. 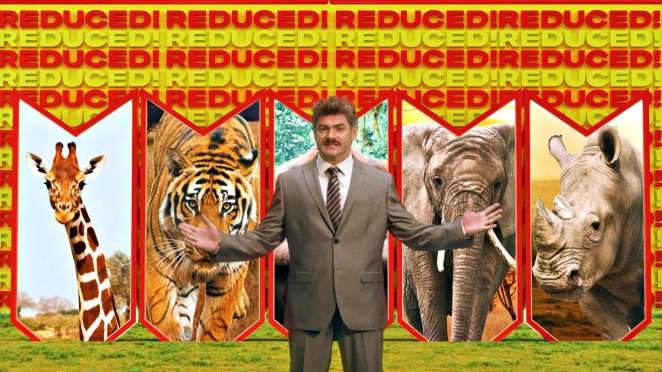 Adoptions. The campaign is all about increasing the numbers of people who adopt an animal through Born Free and in doing so help support the fantastic work that they do all over the world to protect endangered wildlife. It’s a particularly tough year for everyone,  financially and emotionally, so we’re more up against it than ever in asking people to part with their cash. All we can do is get their attention and tell them how they can help.