The average brand spends millions of dollars on marketing every year. For the big global brands, it's billions.

"Half my advertising spend is wasted;
the trouble is, I don't know which half"

These days, brands tend to think they know what portion of their budget is wasted, but not until after the campaign has run and certainly after the sales figures are in. They supposedly learn from this data to minimise their wasted spend.

But, every now and then, it's glaringly obvious when money has been wasted. And on what.

Remember when Pepsi put Kendall Jenner in an ad in 2017? In case you were under a rock that year, here it is:

I apologise for making you see something that cannot be unseen. If you feel duped into adding yourself to the view tally, rest-assured neither the agency nor the brand are likely to assume that as a sign of success. They know why people are watching this ad now.

No such thing as bad publicity?
Oh yes there is.

This ad received such immediate backlash, it was pulled within 24 hours. It was deleted from anything related to the brand. The plethora of news articles that spoke of the debacle still appear online, but now have a 16:9 black "video not available" box where it used to be. Even now, you will only find it re-posted on other people's YouTube accounts where Pepsi's lawyers have been unable to reach.

The brand’s immediate action of pulling the film from their online channels, and the issue of several apologies, is proof positive that they know they did something wrong.

PepsiCo spends USD 3 billion on advertising globally each year, and USD 224 million on the Pepsi cola brand alone. It has been estimated this particular ad cost USD 5 million for production (including Kendall's fee), plus about USD 100 million for media. Nearly half their annual budget for the brand.

But how much did it really cost?

While the parent company PepsiCo reported growth that year, this is the total of all the brands and companies under the umbrella. And even if the Pepsi cola brand still managed to show decent numbers at the end of the year, there is still the unvalued cost to customer loyalty and consumer confidence. Not to mention the history-making moment that should forever appear on the brand's Wikipedia page.

Author's note: I checked Pepsi's Wikipedia page at the time of writing this article and was surprised to find no mention of this commercial whatsoever. A quick jump over to Kendall's Wiki page and it's writ there. I can only assume the Pepsi PR team have excised this paragraph from their Wiki. Give me a moment and I'll see if we can put it back in. For history. ;)

Aside from the ad being a pitiful piece of film starring several Gen Y/Z icons, the incredibly overt diversity that brands are desperate to prove (too little, too late), and way too many brand mnemonics, the surge of criticism focused on the misappropriation of protests and peaceful demonstrations which have become a powerful and meaningful movement for people to fight for positive change – not the least of which was Black Lives Matter.

The Pepsi ad had even been constructed so that a particular image from a real Black Lives Matter demonstration was carefully reconstructed as a scene, albeit with cans of soda. Such a detail does a great disservice to the symbolism of that genuine movement.

Who's to blame for this travesty?

The short answer is "Pepsi". But look back a little further to find out why.

He said working with ad agencies created a complicated structure, of which he was sick and tired. “There is no infrastructure to advertisers to be able to quickly produce that content. You have to patch it together. Certainly the traditional agencies can’t do it.”

So where did it all go wrong?

It’s easy – especially as the ECD of a creative ad agency – to point the finger of derision at Pepsi’s own internal creative division with a tsk, tsk, tsk, and say "Leave the advertising to the experts."

But there’s more at the heart of this.

In all likelihood, Pepsi hired talented and experienced marketers and advertising creatives to staff their internal studio. However, their model is based on collaborating with freelance creators, writers and film-makers on a project basis.

And while there are many talented cinematographers and screenwriters and content creators out there, brand marketing is a specialist skill that requires experience and understanding of the value of an idea for the purpose of selling a product to the right people at the right time in the right place. That’s what clients are paying ad agencies for.

Pepsi assumed they could build a hive of content creators to produce their marketing, while they undertook the responsibility of marketing intelligence for themselves.

Whenever there's a bad ad, the responsibility falls on the client – the individual brand managers and marketing managers who approved the idea. And when an ad agency originated the idea, it's a shared responsibility. At the very least, there's someone to blame other than the brand itself.

Putting aside the big issue of trivialising the BLM movement, the ad reads like a checklist of client requirements:

Overt diversity to show inclusion – tick

Obvious use of brand colour (blue) throughout – tick

One can imagine the team litany of data-fuelled insights and trend-watching that inspired this attempt at fabricated storytelling to resonate with a target audience. I bet there were genuine high-fives around the boardroom table. #NailedIt

But it’s not genuine. And even when it’s OK to be contrived, it didn’t come from the heart. The amalgam of insights and social mores turned into a real-life Frankenstein’s monster that rampaged the village.

Worse yet, the Pepsi idea isn't terribly original. Some say it has all the hallmarks of a Coca-Cola ad from 1971 called "Hilltop" in which a diverse group of singers join together for a song about how Coke can unite nations. Of all the brands one could mimic, why choose your biggest competitor?

While the film itself is vastly different and looks more like a Napa Valley cult (hey, it was 1971!), the themes are parallel to Pepsi's commercial. We're all different, but we all like this soda. And if we could all just have one together, everything will be alright again. Smile!

With no agency to be the buffer, scapegoat, or voice of reason in the first place.

The next time you're in a team huddle or brainstorm session and someone says, "No such thing as a bad idea," take away their Pepsi and kick them in the shins. There are more bad ideas than good. The trick is knowing which ones to make.

Updated Author's note: Pepsi's Wikipedia page is protected. Under Wikipedia rules, site administrators lock certain pages that are highly subject to online vandalism. You can imagine Pepsi being one such page. So I have made an edit request through Wikipedia's formal process. Here is a copy of the request I made: 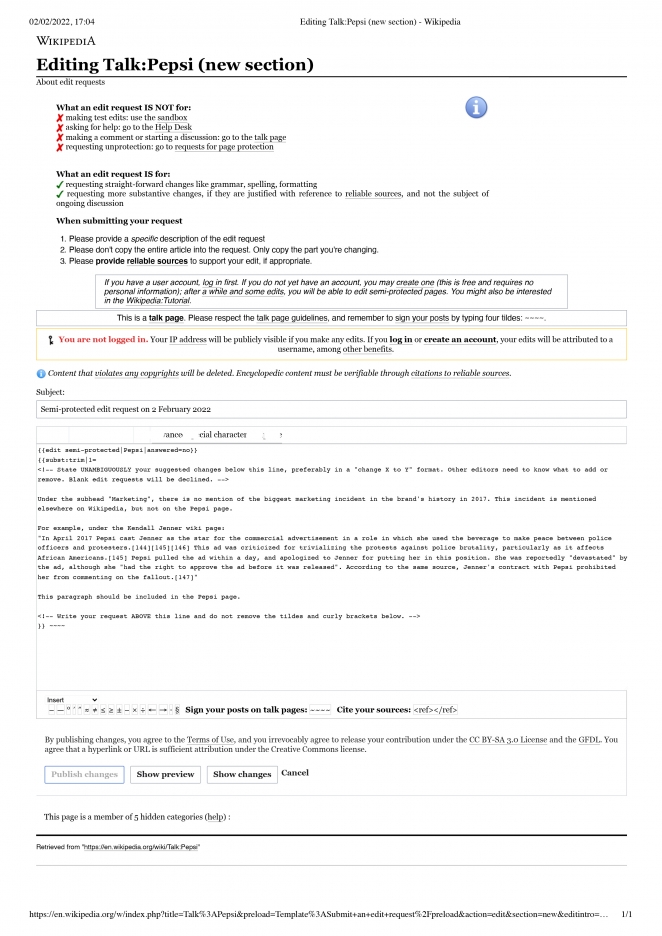 It has been nearly three weeks since I requested the update to Pepsi's Wikipedia page and have been asked to provide a 'reliable source' to the addition. In response, the reliable source I have provided Wikipedia is their own Wikipedia page for Kendall Jenner. We'll see if that has any impact.

It has been over 4 months since I made a formal application to update Pepsi's Wikipedia page with what is valuable historical information, substantiated elsewhere on Wikipedia, but there has been no update. Conspiracy theorists would say Wikipedia, always in need of cash, is lining their pockets with soda money. I think it just shows that even bastions of information like Wikipedia will not always be reliable.