It was just at the beginning of February that Twitter announced its latest rebrand, a visual identity which I personally praised for being quite in line with Twitter’s recent moves. Around a month later, the next step in that rebranding process has actually been revealed – and it has to do with way more than ‘just’ the refresh of marketing collaterals.

I must admit I was sceptical myself when I first heard about this new Super Follow feature. You have to understand, though, that I come from a place of having too many subscriptions, some of which I even rarely use – but for the little value they provide to my life, they are still, always “nice to have.” The thing is, my first reaction to the news turned to surprise and even admiration when I actually read what this new feature was about – which is not just about Twitter cashing in on its community. It is about rewarding the people on the platform.

But let’s see why that matters, and what brands can learn from this new move made-in-Twitter.

Keeping Twitter’s overall identity in mind, I can see why this is one of the very few cases in which I don’t cringe when hearing ‘Super’ Follow – which by itself would be quite an unoriginal name. But it does make sense with Twitter’s brand, doesn’t it? It is friendly, informal, almost feels warm and empowering – which is everything that Twitter has ever been about.

Twitter has also announced to be working on an audio chat service (Spaces) which is to be framed as a competitor of the rising Clubhouse, but that’s outside the scope of this piece.

If at this point you fail to see how genius and timely the Super Follow feature is, let me tell you more about why it makes sense for Twitter and the future of the industry. 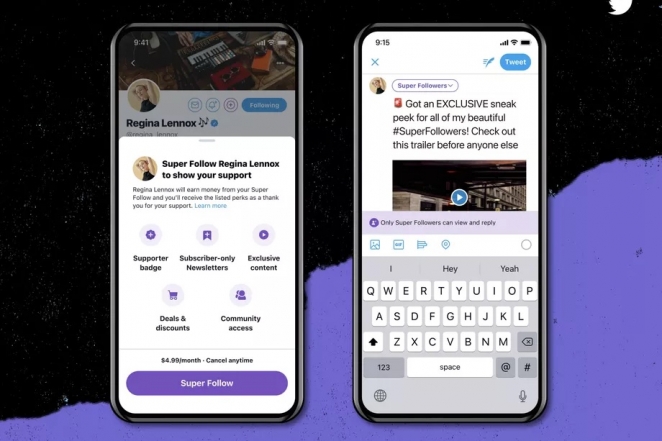 There is a lot of noise on social media. We have started to get pretty tired of that recently, especially after a year when social media have been consistently on the rise. The need for curated spaces and more intimate communities is now more relevant than ever. As someone who wanders around Twitch quite often, I can guarantee you that few things equal the feeling of being listened to and interacting with a content creator, and that is much more likely to happen in smaller communities, rather than with big influencers.

It is why brands and the industry are turning more and more to Micro Influencers, rather than their macro counterparts with hundreds of thousands of followers: communities for Micro Influencers are more compact, and they deliver more value for the budget spent in such marketing ventures.

But back to the Super Follow feature. What is quite interesting about this simple idea is that it follows a Patreon-like model. For those of you who don’t know it, Patreon is a platform which enables independent content creators to receive donations on a monthly subscription basis to support their work and encourage them to create more amazing content for their loving communities.

Now, never would I have imagined to see a Patreon model land on Twitter, and yet here we are.

The mere fact that this subscription-based Super Follow feature relies on the Twitter community to work, rather than Twitter itself, is what makes it potentially so powerful. Content creators with a large following (and there are loads on Twitter) will always find a way to monetise their hard work, meaning this feature has the potential to literally sustain itself in a few months’ time. It is every creator’s dream to be paid for the kind of content they provide to their community – truthfully, it is every creator’s dream to even have a community.

It is something that we can see reflected in a lot of other platforms too. Medium has been rewarding its most skilled writers for years with a curated model, and with the rise of OnlyFans and Ko-Fi, Patreon certainly isn’t the only community-based platform out there.

Patreon is one of the most popular membership platforms out there.

As users on Twitter love being part of communities, you can certainly expect them to pay to be part of something they love so much. There is a reason, after all, if one of the most popular perks on low Patreon tiers is exclusive access to a bespoke Discord server with your favourite creators.

But let’s not rush into cutting businesses out of this picture. Nowhere does Twitter say that this new feature is only for creators and, in fact, it even states that publishers can take advantage of it as well, potentially enabling very large accounts to build larger communities with their followers. We can definitely expect Twitter to come up with a business subscription plan or something similar that is specifically tailored for brands and businesses. Meaning Super Follow may enter the marketing budget as well, and sooner than you think.

What does this mean for brands and agencies?

Twitter’s new Super Follow feature certainly sounds amazing for any kind of creative professional out there. Writers will find new ways to be rewarded for their work on Twitter, and so will brands and publishers looking to build specific communities on social media.

What Twitter is doing is unprecedented in the most popular social media platform. Neither Instagram nor Facebook do something like this, as they prefer working on an advertising model – which quite frankly is also becoming a bit tiring on the user’s side, and is trumping growth for most creators with smaller budgets out there. TikTok is slightly different, rewarding creative partners on the number of views – but still, it is largely dependent on one’s reach and not at all reliable when it comes to building communities.

We must not ignore the impact this Super Follow is going to have on creators. Focused and professional micro/mid influencers will start building incredibly active communities around their profiles, in a way that simply isn’t possible on most social platforms out there. This means more opportunities for brands wanting to engage with a specific segment of audience. And in turn, it means more opportunities for agencies looking to reach out to digital influencers for their campaigns.

You can tell from the piece above that I am clearly quite excited for this new development in Twitter’s business model. I’m curious to see what it will bring, but I’m also confident that it will be a great success for the platform and everything it represents.

And I’m so bloody happy we’re not simply paying to finance yet another tech giant – who clearly doesn’t need my money as much as the emerging singer or writer creating content in a crooked bedroom. Though you can bet that big tech firms will jump on this bandwagon as well – at least, as soon as they realise how late they are to the party.