If you have a Facebook account, which most of you probably do, you can't have failed to notice your friends and family lobbing buckets of ice water over their heads for the past few weeks. Maybe you've taken part in the stunt yourself, much to the hilarity of whoever's filming you. The idea, of course, is that it's a fun way to raise awareness of – and money for – the disease known as ALS.

Amyotrophic Lateral Sclerosis (ALS), often referred to as Lou Gehrig's Disease, is a progressive neuro-degenerative disease that affects nerve cells in the brain and the spinal cord. Most people had probably never heard of it (in that form) until the ice bucket challenge brought it to prominence via social media. But here's an interesting question: now that people have heard of it, and have possibly taken the challenge too, do they still not know what ALS is – or even what it stands for? Do they know it's the same as MND – motor neurone disease? The same disease that Professor Stephen Hawking suffers from?

And interesting question number two: does it matter that they don't know? On one level, yes, of course it does – very much. But on another level, no it doesn't.

Yes, the challenge is about raising awareness, but the key thing for any charity is to raise money. And they are doing that via these viral videos...in bucket loads.

Let me draw a parallel. Year after year, thousands upon thousands of keen runners are disappointed that they have not won a place in the London Marathon – the first, biggest and best marathon in the world. The public ballot is forced to close literally hours after it opens because they are inundated with applicants, so the only way they can get a place is to run for a charity.

Without wanting to be cynical, I'm not 100% sure how much people know about the charities they're running for. Yes, if they're running for Cancer Research or Macmillan, for instance, the chances are that they or their family have been touched personally in some way, so they are running for the memory of a loved one. But if you look down the list of charities with marathon places up for grabs, I guarantee you won't have heard of half of them.

Once again, does that matter? And once again, yes and no. Yes, it would be nice to think that everybody running the marathon for charity is doing it with the people their money would help in mind all the way round the course. But the reality is that a runner may well have chosen a charity to run for simply as a means of getting a place – but the charity will still be delighted because the runner has had to pledge to raise a minimum of £1,500 to £2,000 for their cause. Everybody wins. 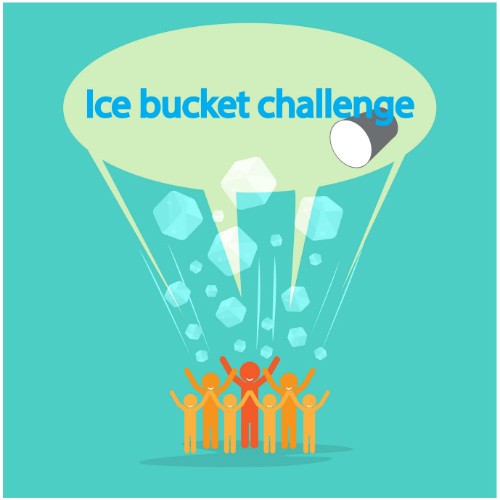 So back to my title: the ALS ice bucket challenge – brilliant or annoying? I ask the question for one reason and one reason only. The other day, I noticed a comment from someone on Facebook who was apparently sick of seeing other people's “hilarious” videos. His point was that he gives privately to his own chosen charities without making an icy song and dance about it, and he just didn't like the fact that people were jumping on the slippery bandwagon.

Does he have a point? Or is the raising of money for such a worthy cause the only thing that really matters?

I've given it due consideration, and I'm on the latter side of the fence. Well, I say that: I'm also assuming that the ice bucket-challenged individuals do actually donate too, and don't just take part in the stunt. I can't see that there's much point in that, short of giving your mates a laugh. But even then, if you've seen one shivering drowned rat, you've seen 'em all...

I wouldn't do it myself, but my teen kids and their mates just love it. When challenged I keep posting photo of an ice bucket. With beer in it.

My friend recently wrote a rather amusing blog on the subject, which I implore y'all to check out. http://iamthebeef.wordpress.com/2014/09/02/ice-to-meet-you/

In the beginning the idea was EITHER you donated or got iced. What masochist made it both?!

The Ice Bucket Challenge raised £7M in the UK in just over 4 weeks after people (myself included) poured icy water over their heads and posted them on social media. That £7M is almost half of what the MND Association raised in all of 2013! Of course, another charity saw an opportunity and jumped on the bandwagon and raised £4M itself, cheeky, may be but charity is very emotive and if individuals were able to raise money for causes that are close to their hearts too then great! The MND Association received over 750K hits on its website during this short period, that's compared to the 300K visits it received for all of 2013 and not only that, it has received millions of new followers on social media, hundreds more direct debit mandates set up and signatures for the MND Charter. Annoying? Maybe. Brilliant? Without a doubt. And as for the once you seen one, you've seen 'em all comment, I suggest you search youtube for the epic fails available before making such sweeping comments Ashley!! Don't forget, you can still text 'ICED55' to 70070 to donate £5 to this deserving charity or visit mndassociation.org

Hi Simon - thanks for letting me know what the latest figures are. They're truly staggering! And it does indeed prove the point that the IBC was (and still is) a great idea. But as I say, I do hope that those who took part actually DID donate and not just do the challenge. Because originally, of course, the challenge was to do one or the other. Hopefully, people are doing both.