In a culture which increasingly focuses on pushing forwards and always being connected; mindfulness is big news. Unless you’ve been living in cave for the last couple of years (and not because you were on a zen retreat), it’s been impossible to miss the hype surrounding the practise of pressing pause.

"It's about training our minds to be more focused, to see with clarity, to have spaciousness for creativity and to feel connected."

In February, Harvard Business World announced that mindfulness in the business sector “is close to taking on cult status”, as companies begin to realise the link between mental wellness and productivity. Recently, Google invited legendary mindfulness master, Thich Nhat Hanh, into Silicon Valley to lead a private day of mindfulness for 15 of the world's most powerful tech masterminds. By welcoming the practice into workplaces, companies create a space in which new ideas and energy are free to flow. Janice Marturano, founder of the Institute for Mindful Leadership told The Financial Times: "It's about training our minds to be more focused, to see with clarity, to have spaciousness for creativity and to feel connected."

The tech industry has always championed the mindful revolution; meditation was initially a big hit amongst Silicon Valley’s hacker culture and Steve Jobs was an infamous zen enthusiast. Given tech’s demand for constant digital stimulation, it quickly became a necessity for employees to find the time to switch off. Increasingly though, information overload is a fate that awaits us all. So what can we use in our daily lives to lessen the tweets, bleeps and incessant notifications?

Well, a glance at what apps are being used in Sillicon Valley is a good place to start; the leaders in their field are Headspace and Calm. 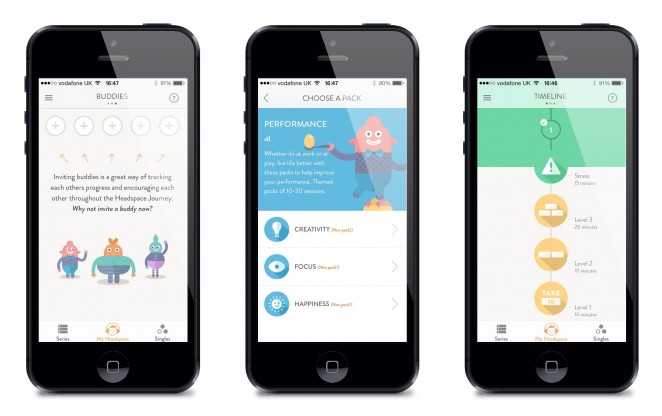 Headspace launched in 2012 an is the brainchild of British meditation teacher Andy Puddicombe. The wonderfully designed app provides ten-minute meditation sessions, and has been downloaded by three million people since its launch. This number includes Richard Branson, who has put the company’s meditation exercises on Virgin Airlines flights. Recently The New York Times commented that Puddicombe is “doing for meditation what Jamie Oliver has done for food.”

“If we could be the Netflix of personal development…that would be cool.”

Calm is the side project of Moshi Monsters founder; Michael Acton Smith, and initially started life as a website where web workers could go to take a break. Its popularity gave rise to an app which teaches you to relax through soothing nature scenes and the built-in 7 Steps of Calm programme. The long term vision is to offer personal development through a variety of techniques. Alex Tew, creator of the Calm website said: “If we could be the Netflix of personal development…that would be cool.”

These apps are a great way to meditate whether you're new to it all or a seasoned zen master. Both look set to become the Uber of personal well-being.

The 7 Days of Calm

Tech has other offerings for you as well. If you’re totally new to meditating and want to start from scratch, try the Mindfulness Training App which gives you an introduction to the teachings of all the key mindfulness coaches including Jon Kabat-Zinn. It’s an easy introduction into what it’s all about. 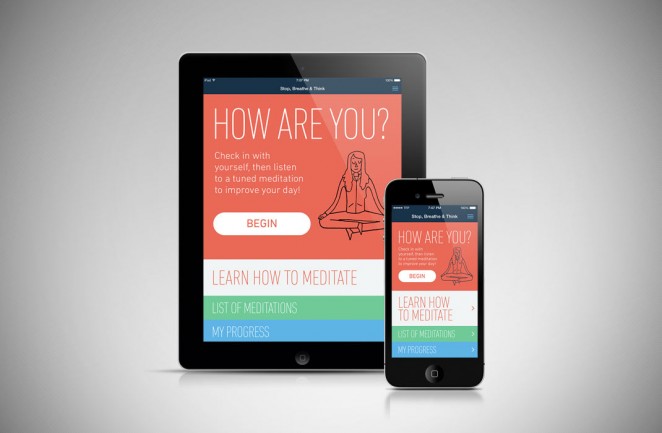 The Stop, Breathe, Think app invites you to do just that

Meanwhile, if you're looking for an easier way to incorporate meditation into your daily routine, check out Stop, Breath, Think. An app which offers a range of exercises at varying lengths, perfect for short meditations at work. It’s super easy to use as well.

Or, for a practise that allows you to engage with others try the Insight Timer; a meditation timer that doubles as a guide and allows you to share times and practises with your friends.

Tech's relationship with mindfulness is a well-trodden path in creative discovery. Go exercise your inner calm, peace out.