For some curious reason, we humans tend to get excited with novelty pretty quickly. We struggle to see past the innovation, and the most progressive of us (a lot of creative people are, to be fair) get carried away with some doomsday comments aimed at this medium or the other. Yes, it is exciting what is happening to digital. Yes, gamification is an interesting prospect for the future. Okay, perhaps print and TV are struggling (one of them quite a lot). But are they dying? Are they agonising?

The future of TV

The advertising industry has been describing TV as a dead medium (or a dying one anyway) for over a decade now. It is true that online streaming, YouTube and the internet have put a strain on the capabilities of TV – but it appears to me that the medium is stronger than ever.

In May 2020, a few months after global lockdowns started kicking in, RLT AdConnect released a Covid forecast detailing the impact of the pandemic on TV and video consumption. The results and findings will look surprising to most end-of-the-TV-world fatalists. 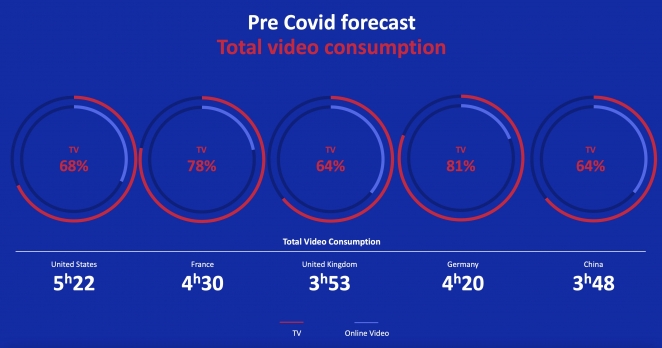 On average, the world spends two hours and 48 minutes watching TV every day. That is not every three days, nor every week; every day. Sure, young people without a TV (I’m part of that demographic) may spend more time with online videos on Twitch, YouTube and other social platforms – but most of the western world is still sitting in front of the TV for at least three hours a day.

Hungary and Italy, in particular, lead the way with about four hours of daily viewing time. And according to Statista, nearly 40% of consumers on average was watching ”a lot more TV” from July 2020 to June 2021, as a result of the numerous lockdowns and restrictions. If TV were truly dead, people would have flocked to online platforms, spending time scrolling through TikToks or watching Twitch streams all the time; instead, people still seem to prefer long-form content somehow, and TV is the perfect medium to broadcast it.

Now, it is not clear from this data whether this TV consumption relates to the use of streaming platforms on Smart TVs (Netflix, Disney+, Prime Video and the likes). But we may have answers for that too. According to a report from Ofcom, as reported by The Conversation, TV viewing went up overall during the pandemic – but streaming platforms were the ones which experienced more growth, as opposed to more traditional broadcasters such as the BBC.

TV is stronger than ever. With this striking TV spot for AMV BBDO and Libresse, Chelsea Pictures won the first Grand Prix in the history of The Annual 2021 awards this year.

In other words, subscription video on demand (SVOD) continues to grow, with an average of about 3 subscription services per household – and this fuels TV consumption, alongside all new viewing behaviours. Additionally, whilst slightly declining, ad spend has remained moderately stable in the years prior to the pandemic, with £4.93 billion spent in the UK in 2019 alone.

All this shows us that TV advertising is far from dead. Sure, it may be struggling at times, especially when looking at traditional broadcasters; but as things were starting to look dire, TV manufacturers started converting their screens into smart platforms for viewers, supporting a number of formats such as online (YouTube, Netflix) and broadcast (BBC, CNN). Despite the creeping advance of online and mobile video consumption, TV is reinventing itself and it is fighting back.

The future of print

In his most famous book, The Copywriter’s Handbook, Robert W. Bly makes a rather strong point: online, you are competing with other advertisers for the viewer’s attention. Users connect online to entertain themselves, kick away some boredom and have a good time. As they scroll mindlessly through social media feeds, there are hundreds of other posts they may see. You are literally aiming to disrupt their experience and make an impact, so they will take action or remember your brand in the near future.

All this is less needed with print. Print is more intimate. When you receive a brochure, pamphlet or other ad in the mail, when you glance at an ad on a magazine, you are not competing with hundreds of other ads jumping at the viewer pretty much at the same time. You have more opportunities to make an impact and generate leads. Some may argue you have more time too, if your visuals and copy are engaging enough.

With that in mind, print can still be an incredibly powerful tool. It is true that most advertising is done online now, but just like with magazines and websites, the field has only been shrinking – not dying. 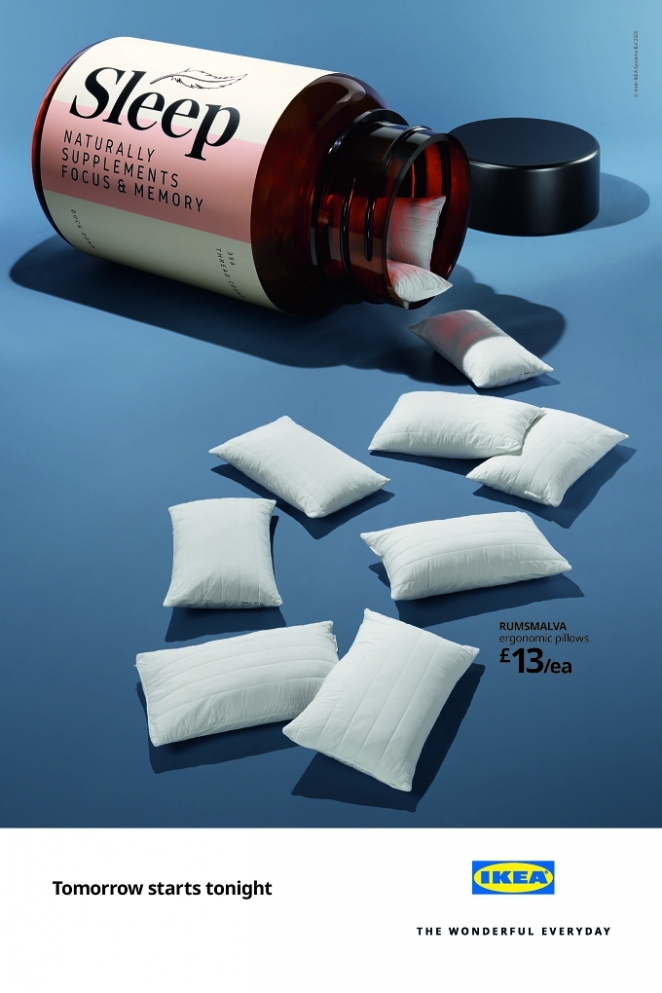 This year we've seen some amazing print projects entered into The Annual 2021. This one, named 'Tomorrow Starts Tonight', was created by Mother for IKEA.

To deny that print is struggling would be foolish. Compared to TV, far less money is being spent on print. According to Statista, advertisers spent £74k millions in print advertising in 2017, just about four years ago, split between newspaper advertising and magazine advertising. Fast forward to 2021, a year following a global pandemic, and print spend has declined to £53.5k millions. That is a decline of about 27% in ad spend – huge numbers in a field such as print advertising.

When you compare that number with the billions spent in TV advertising, it is clear that print is much smaller, much less influent and possibly much less profitable. Still, print has its advantages, and there may be ways in which it could be revitalised in the future.

For one, print is tangible. It is a tactile, physical experience that some consumers will enjoy, as it’s still one of the best ways to show off some beautiful design. It is a lot more work to produce than an online banner, but this means fewer and fewer people are doing it. If anything, magazines and publications with print ads are less crowded now, which means more opportunities for those who truly know how to stand out.

Additionally, Augmented Reality Print is on the rise. With the help of phone cameras and screens, there are already some cases of AR-in-print out there, which don’t really require the use of specific app to provide a connected digital experience. The general hope is that these will become even more popular as mixed reality glasses (such as Apple’s) start being released. 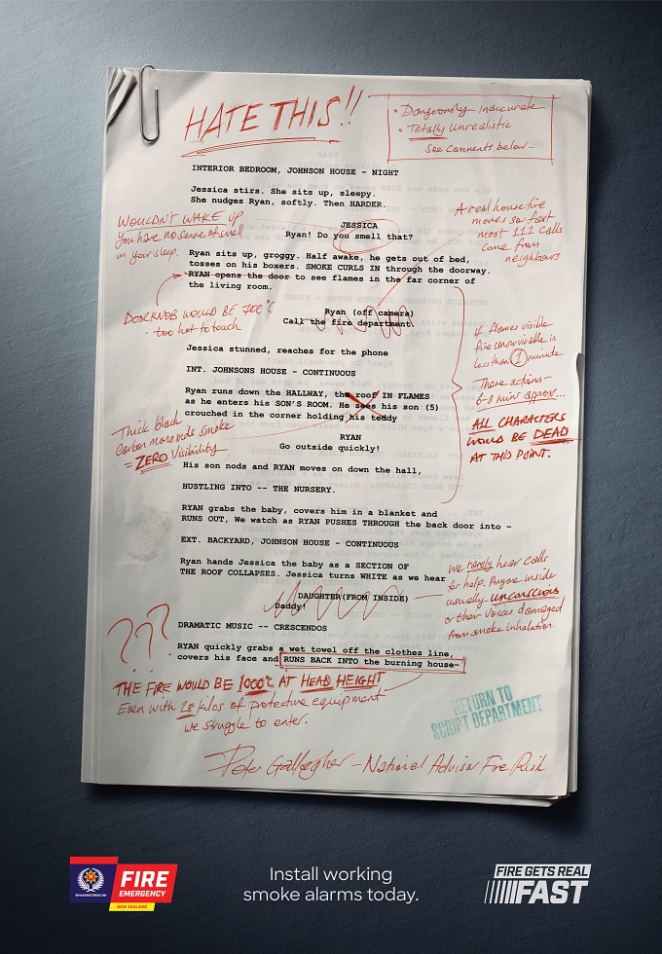 All of this adds up to show that print ads are more trusted than online ads. The process behind producing print ads is longer and has to go through more filters, meaning the chances of fraud are much more minor, and those who are investing in print are seen as reputable.

Surely print is a dying market at the moment, and it will remain such if it doesn’t find ways to reinvent itself – sustainably. As more and more users go paperless, print becomes superfluous and even wasteful. No one wants to receive a batch of paper that they are going to throw away at a later time, adding up to the climate crisis. Unless print finds ways to remain relevant, it will keep declining. But TV has shown us that reinvention is possible to turn around a downward curve – so who knows what the future has in store for print?

Stop saying this or that medium is dead

TV is not dead. Far from it. Print may be dying, but it will find ways to remain relevant – or at least that’s the general hope.

We creatives are often led by emotions. Too often, when advocating against one medium or the other, we tend to inject our opinions with our personal preferences and experiences; we don’t use or consume TV anymore personally, so everybody else must be doing the same. We don’t work with print anymore, so the industry must have turned away from it.

You are free to come to your own conclusions, of course. But these are dangerous assumptions. If you fail to see the rising trends in the market, you will miss out on opportunities which may help you grow and outperform your competitors. Many things in human history are cyclic; the fact that one medium is declining now does not mean that it will do so until completely extinguished.

Just look at radio advertising: everybody was quick to determine that video would kill radio stars. Decades later, radio is still standing, and through platforms such as Spotify that foster podcasting, it has a newfound life – one which includes advertising and creativity.