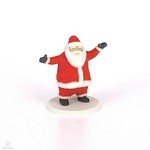 Santa Claus - what the science says.

Merry Christmas Creativepoolers everywhere. As this piece arrives on Christmas Day, you'll have seen that Santa has completed his work. But, have you ever wondered what Father Christmas goes through every year? Well, we have. Which is why we set Creativepool's top scientists the task of analysing the fat fellow's annual mission. Here are the results:

1) None of the recognised species of reindeer have the ability to fly. However, there are more than 300,000 species of living organisms still to be classified. Admittedly, most of these are insects and germs, but this does not preclude the remote possibility there is a genus of flying reindeer hitherto only visible to Santa.

2) The world has approximately two billion children. That is, people under 18 years of age. Taking into account the fact that Santa doesn't service Muslim, Hindu, Jewish and Buddhist children, that brings his brief down to around 15% of the total. Which would be something like 378 million kids. Taking an average rate of 3.5 children per household, that's 91.8 million homes he must visit - providing there's at least one well-behaved youngster in each location.

3) We can safely say Santa has 31 hours of Christmas in which to perform, allowing for the different time zones and the planet's rotation and assuming he flies east to west. This gives him 822.6 visits to complete every second. So, for each eligible household, Santa has 1/1000th of a second to park the sleigh, hop out, jump down the chimney, fill the stockings, put presents under the tree, eat the mince pie and drink the sherry, return to the sleigh and move on. If each of these house calls are evenly spread (which is by no means guaranteed), he is looking at a total distance of 75-1/2 million miles, without a lavatory break, or a rest for the reindeer.

By this calculation, Santa's sleigh travels at 650 miles per second - or 3,000 times the speed of sound. The fastest vehicle ever made is the Ulysses space probe, which travels at 27.4 miles per second. Most reindeer can only run at a maximum of 15mph.

4) But what about storage on board the sleigh? If each kid receives nothing but a medium-sized Lego set, the sleigh will still need to carry 321,300 tons. And that doesn't include Santa himself, whom we know to be overweight. Regular reindeer cannot pull more than 300 pounds and even if flying reindeer could pull ten times that, eight, or nine beasts is insufficient. Indeed, Santa will actually require 214,200 reindeer. This increases his total payload - excluding the sleigh - to 353,430 tons. Four times the weight of the QE2.

5) Now, 353,000 tons flying at 650 miles per second is going to create some incredible air resistance. This will inevitably heat up each reindeer, with the lead pair absorbing 14.3 quintillion joules of energy every second each. Unfortunately, this means they will burst into flames almost instantly, as well as producing deafening sonic booms. As the other reindeer would now be exposed, the whole team will be vaporized in 4.26 thousandths of a second. Santa himself will be subjected to centrifugal forces 17,500.06 times that of gravity. Which means he will be pinned to the back of his sleigh by 4,315,015 pounds of force, crushing his portly body flat.

Magnus Shaw is a copywriter, blogger and consultant
www.magnusshaw.co.uk
/magnusshaw