It's fair to say that Russell Emanuel (hero image far left) has led a pretty interesting life. This is a man, after all, who can casually name drop and cast aside musical legends such as Paul Weller and Hans Zimmer without blinking an eyelid. He is also a man of incredible grit, talent and fortune, having worked his way up from the punk circuit of the 70's to the top tiers of the music licensing game. Indeed, Russell is currently the co-founder and president of two of the most prolific licensed-music production houses in the industry: Extreme Music and Bleeding Fingers. Most recently, Bleeding Fingers paired its best in-house composers with Zimmer (arguably one of the most revered composers in the world) to create the score for BBC’s groundbreaking documentary series Planet Earth II. A score that might net Bleeding Fingers its first Emmy!

I caught up with Russell last week for an illuminating 30-minute phone conversation that took in everything from his beginnings in the industry to some of the more elaborate and inventive 'punk' marketing tactics he used to spread the Extreme Music message back in the days when political correctness was a little more forgiving. For context, he once raised awareness of his brand by sending out condoms as a promotional item to clients with the message “the only safe thing you’ll ever get from us​.” Inspired stuff indeed! During our conversation, Russell shares his opinions on collaboration, creativity and Princess Diana, We also delve into the history of Extreme Music, the origins of Bleeding Fingers, and Russell's work with the legendary Mr Zimmer. A few laughs are shared along the way too. 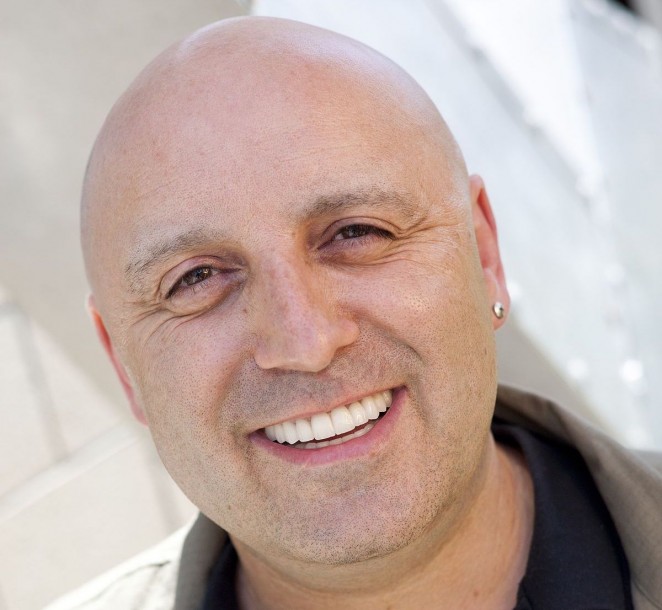 I hear you’ve recently been nominated for an Emmy for your work on Planet Earth 2?

Two Emmys actually, one for Planet Earth and also for Challenger: The Lost Tapes, which is a music and sound nomination. Bleeding Fingers is our collection of composers, so if one of our composers gets a nomination it's for Bleeding Fingers as a whole.

So how involved are you yourself with the composition of the music?

We have two companies, Extreme Music and Bleeding Fingers, and I’m directly responsible for both. We have 12 in house composers at Bleeding Fingers and I’ll be in there in a kind of producer role. My history is in production and engineering so my role is to effectively walk in there and step all over their creativity (laughs).

What kind of background do you generally draw you composers from?

It’s a bit of a mixed bag. We’re based on the Hans Zimmer’s Remote Control campus in Santa Monica. Remote Control has 5 different buildings, housing 51 studios and it really is a one-of-a-kind place. Hans owns it with his partner Steve Kofsky and we’re very fortunate with the great stuff that comes through here from A-list composers like Lorne Balfe, Henry Jackman, James Levine, Harry Gregson-Williams and Hans himself obviously. It’s an incredible campus that draws talent because it’s known as a hub for outstanding new composers. My job is to work with Hans and look out for those upcoming new stars and bring them into Bleeding Fingers.

Do your composers share ideas and work together or is it more of an every man for himself scenario?

Absolutely. Collaboration is what sets Bleeding Fingers apart. We have 12 composers and an entire support staff built around them in one building and we encourage everybody to work together. In fact, when we’re building the team we look for composers with different skill-sets. If you take Planet Earth as an example, we have Hans doing the main titles and Jacob Shea and Jasha Klebe doing the score, and they bring in all of their support teams too, so when you add it up, you probably have about 15 people working on just that one show.

So how do you choose who works on each project?

See that’s where I think I do actually bring the most value because I’m very intimate with the composers and know what each of their strengths are and also where they want to go. Building those teams within the building is, for me, where we have the most fun.

Could you tell us a little bit about the start of Bleeding Fingers and what inspired you to get into music publishing?

Myself and my partner Dolph Taylor had been on the road managing a band called Stiff Little Fingers and around the tail end of 1996, after 20 years we decided we wanted to finally get off the bus. So we started Extreme Music. The idea behind it was that, the production music library was historically where musicians go to die, but we started Extreme with the punk attitude that we’d developed on the road working with bands like Stiff Little Fingers and The Jam. We thought it was time to do something different so we got into music for TV through Extreme and we were fortunate enough that Hans (Zimmer) liked what we were doing, so that relationship evolved and by hook or by crook I ended up moving to LA. Bleeding Fingers evolved out of that LA scene in a very organic way so that it could work alongside Extreme, with Extreme creating a catalogue that predicts what our clients will need and Bleeding Fingers acting as a custom music division creating bespoke scores for TV and film.

Can you tell us about what you’re working on at the moment?

Absolutely. We’re working on The Blue Planet right now and National Geographic’s “Diana in Her Own Words,” which is an incredible show, nothing like the other salacious one that’s coming out. It’s amazing how quickly we’ve gone from doing reality shows to this more ambitious stuff.

Going back to the early years of Extreme, I read up about the 1000 condoms you sent out to clients, are there any other non-PC marketing stunts from those days you could share with us that you’re particularly proud of?

The one that stands out for me is in the UK, it wasn't politically correct at all, but this was the 90’s. Anyway, there was an industry awards ceremony at the Grosvenor House Hotel in London. Black tie, £10,000 for a table. We were still a very young company, but we bought a table right at the front of the stage (I think we paid twice the going rate) and we stood on the balcony at the back, sending ten ‘little people’ in our place wearing t-shirts that said “Extreme Music: Size Isn’t Everything” and it was a great night. Everyone who won an award that night wanted their picture taken with our tables of dwarves and our team so it was a great night.

As somebody who makes the odd bit of money from music, but not as much as I’d like, how do you think somebody like myself could get involved in composition?

That’s very interesting because I know a lot of people say the tried and tested route is certain colleges and schools, but being somebody that discovers musicians at the other end of that, it doesn’t matter whether they have been to Berkley or Belmont, what matters to us is stumbling over something that’s exceptional within a specific area. For me, when I find someone that does one thing incredibly well, it’s always so much more exciting. My advice is the same advice I’d give any band, which is to be different. Find that thing that makes everyone sit up and listen.

That leads nicely onto my next question. Do you think, with the current proliferation of music and ‘content’ that it’s harder to find the exceptional stuff, or easier?

What I’ve found is that a lot of the work is done by the people around you, because if you’re known as someone that’s really on the lookout for something different, the people around you will always feed music up to you, because they understand what you’re looking for. So in that respect, I’ve found it easier. And 50% of the story is always luck too.

One more question before I leave you. What do you think makes a song perfect to work with a certain image? Is it the melody, the atmosphere, the hook, the production, or a combination of everything?

Is this the king of all difficult questions? (laughs) We all have different methods I suppose. But if you’re working for anyone as a composer for a client, whether its a brand, a production company or whatever, the most important thing is to make sure that the client is heard. Too many times I’ve seen the composer think they know better and they put incredible, sophisticated music to a picture, but then it’s been completely scrapped, because, without hearing what the client wants and needs, and working to that template, you’re just wasting your time. Ultimately, in this job, if a musician thinks they know better than the client then they’re not doing their job.

Benjamin Hiorns is a freelance writer and musician from Kidderminster in the UK who would like to offer his sincere thanks to Russell for his time and his insight.