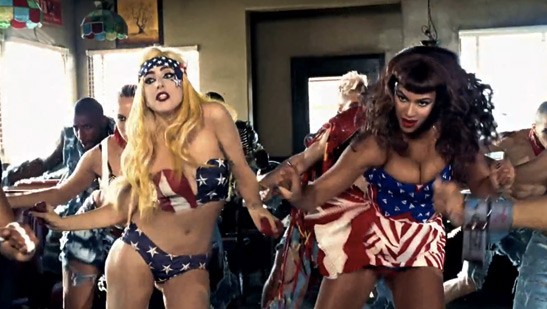 Product placement and music - why the world's gone Gaga

More often than not, late-night, post-pub activities seem to include hap-hazard YouTube antics and for a while now it has been almost impossible not to watch Lady Gaga and Beyonce's power pop duet 'Telephone' for the hundred-and-somethingth time.

This is a video of many layers, with a plot, a script, an unthinkable amount of costume changes and more exposure of Miss Gaga's bod than is really necessary, but what is most blatant and amusing is the shamess amount of product placement which occurs in it's nine minute duration. She's got her own brand of 'Heartbeats' headphones, an HP Envy Beats Limited Edition laptop, Polaroid, Virgin mobile, Miracle Whip, Wonderbread and Diet Coke all in there, not to mention PlentyofFish.com - an online dating site. Not all of these brands paid for their exposure as some of them were chosen by Gaga specifically, the Diet Coke cans which she uses for hair rollers were a nod to her mothers grooming habits in the 70's and the Wonderbread and Miracle Whip were chosen for their all-American kitsch appeal in the diner scene. The video received 4 million plays in it's first 24 hours after being released and all the aforementioned brands have enjoyed a great deal of press exposure ever since, this blog being a mere drop in the ocean. Gaga manages to pull off the blatant capitalistic agenda here because, lets face it, she is Lady Gaga and can do as she pleases but other pop stars have not quite carried it off with such charisma

A quick browse of YouTube offers up horrors such as Jessica Simpson mopping the floor and eating from a can of tuna, Britney pretending to drive a Honda (supposedly minus the infant on her lap), Missy Elliott on the phone, Fergi on the phone and also Katy Perry on the phone. Phones are apparently good because you can blend them in easily and get the artists to sing down them and no one even notices. With record sales in such dramatic decline, it's clear that labels need to recoup the pennies wherever they can and incorporating a product into a music video is a darn sight less humiliating than going down the Johnny Rotten road of Country Life butter ad shame.

But does it actually do the brands any favours? According to Fila, sales of their trainers tripled following a mention in a Jay-Z song and PlentyofFish enjoyed a 15% search result increase as a result of it's special Gaga screening There is also the added bonus that there is very little restriction on advertising within the realms of music. Radio and television ads are strictly regulated by the government but printed or recorded works enjoy a loophole in the law. Brand partnerships are becoming more and more powerful at creating instant trends, this has been helped along by The Kluger Agency who recognize the power of pop music and its effects on the younger generation. The Kluger Agency was founded by Adam Kluger in 2006 and was established specifically to match brands to bands to create huge trends. They are particularly well known for getting drinks and car brands into pop, sometimes even into the actual lyrics of a song.

According to Adam Kluger, the music videos of the future will be solely funded by product placement and brand partnerships. If Gaga is anything to go by then he could well be right. Just don't expect Morrissey to be rolling up his hair in cans of Lynx anytime soon.