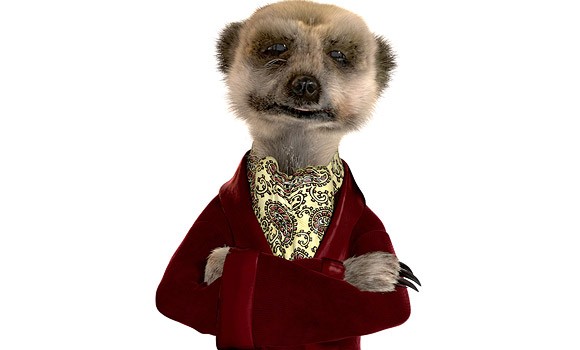 As with so many wonderful things, the Meerkat was first introduced to us by Sir David Attenborough. In the 1980s documentary Meerkats United' we discovered they are not cats, they reach sexual maturity aged one and they speak' to each other. It wasn't necessary to point out that they are almost unbearably sweet and cartoon-like. 20 odd years ago, Sir David would hardly have imagined this sub-species of the mongoose would be the star of one the most successful and memorable advertising campaigns of the noughties. And yet, they are.

The achievements of the campaign are undeniable 57,000 Facebook friends, 26,000 Twitter followers for starters. But they're not the reason I love this work so much, it's the audacity that brings a smile to my face. I don't know what the original brief from comparethemarket.com to VCCP was, but I'm willing to bet it wasn't to produce some fairly low-budget animation, a website that wasn't theirs, a TV ad that barely mentions a proposition and something with rodents in it. The pitch must have been something to behold.

To the client's credit, they went with an idea which seemed more based on children's TV than on anything related to car insurance and almost two years on, they are enjoying all the bounty associated with this joyful, genuinely amusing and utterly endearing work. And this audacity has thrown the quality of other contemporary campaigns into sharp relief. In a marketplace where the infantile banality of the webuyanycar.com chant jostles for position with achingly patronising and stunningly stupid Halifax radio station scenarios, we can only look to Alexander Meerkat and his pal with warmth and admiration.

This is no mean feat. The work may look thrown together with a certain charming naivety, but to bring off an idea which must have looked quite daft on paper, with such aplomb shows real care and skill from the creative team. The fact that other advertisers have tried something similar (noisy opera singers anyone?) and failed, only emphasises this.  Put simply, I am never irritated, agitated or annoyed by any of this campaign's executions and when I consider the recent output of the broadcast advertising industry, that's quite a remarkable and unusual turn of events.

Ever heard of the Pretentious-O-Meter? Neither did I, until earlier today. There is a known reality in the film industry that sees film critics as being constantly disconnected from the end audience. Ratings from critics are often unforgiving and...