Christmas is coming earlier than ever and it’s easy to see why. The festive season has always been seen as a soothing balm for the winter blues and things have never been bluer. But with things so unremittingly bleak, do we really want to be reminded of the wonderful things we can’t afford?

According to Lynne Deason, head of creative excellence at Kantar UK: “This year will be challenging for advertisers as they try to bring the fun, joyful spirit that we love about Christmas ads while being sensitive to the pressures families face over the cost of living. Ads need to avoid falling into the trap of 'sadvertising' - we still want to be uplifted, especially at this time of year - but displays of lavish gifts and excessive spreads risk seeming tone deaf and out of touch.”

For advertisers then, Christmas 2022 is going to be a greater challenge than ever before. Prices are rising, bills are mounting up, and customers are inevitably tightening their belts as the pinch of the cost-of-living crisis finally starts to take hold.

Would a cash-strapped public react kindly to the yearly flood of Christmas commercials encouraging them to spend their dwindling resources on frivolous holiday cheer? The early signs are an emphatic “yes”.

Top of the Christmas tree

System1’s Test Your Ad platform has been rating every new Christmas ad using the emotional response of real viewers to predict each ad’s long- and short-term effectiveness. On the 1 to 5-Star scale, usually only 1% of ads get the top 5-Star score.

But the 2022 Christmas ad season is barely a week old, and we’ve already seen SEVEN 5-Star ads. Aldi, ASDA, Boots, Disney, LEGO, Lidl, and M&S have all made ads which delighted viewers enough to earn the top score.

As a comparison, 2021 saw only TWO ads - Aldi and Coca-Cola - score 5-Stars with viewers. It’s too soon to say which ad will end November on top of the Christmas tree, but there are already some interesting trends System1 were able to single out.

With ASDA referencing a Christmas movie classic in Elf, M&S reuniting French & Saunders and is the unmistakable “Kevin!!” at the end of the Aldi trailer, it seems nostalgia is playing a major role this year. Speaking of which, ASDA have emerged as a strong early contender with a hugely positive 5-Star audience response.

Their technically brilliant ad splicing footage from Elf into ASDA stores hits the millennial nostalgia sweet spot. With John Lewis and last year’s winner Kevin The Carrot yet to launch it’s too soon to call them 2022 winners but it’s a sign that this year’s competition is very stiff.

It’s another great year for Fluent Device characters - Morrisons brought back Farmer Christmas, M&S re-used their Christmas Fairy, and Kevin the Carrot is back once again. Meanwhile Lidl introduced their own brand character Lidl Bear while slyly mocking the whole idea.

The enjoyment around Christmas characters is so high, in fact, that Aldi have become the first ever brand to get a 5-Star score with just a trailer (for their annual Kevin the Carrot ad). The public really love Kevin - Aldi is now the first brand ever to get 5-Star scores 4 years in a row.

Advertisers are playing it safe so far and mostly avoiding the cost-of-living crisis and the controversial Winter World Cup - though the Aldi and Tesco ads which touched on these both scored highly by taking a humorous approach.

Whether this trend continues into the rest of the season remains to be seen as it is early days yet. But subversion has never really been on-trend for Christmas ads anyway and this year people surely don’t want to be reminded of the misery they’re going to be facing when the tinsel comes down in January.

What the experts think

Jon Evans, Chief Customer Officer at System1, said: “The bleak economic forecast hasn’t stopped Christmas advertisers - and now we can see it hasn’t stopped the British public from loving Christmas ads. Right now the likes of Kevin the Carrot, Farmer Christmas, and Buddy the Elf are bringing a spot of much-needed cheer, but in the long-term strong performances now will be good for brands and businesses when the economic gloom lifts.”

Lynne Deason adds: "To get the balance right, advertisers should focus on the real meaning of Christmas - of togetherness, fun and all those magical small moments that make the festive season so special. Brands that take steps to make a real difference to people's lives will also be appreciated.  M&S' ad which launched today, showcasing community spirit and the £1 million being given to The Neighbourly Foundation, and Tesco's £1m donation to the Trussell Trust and FairShare are good examples of this."

Festive cheer and singing loud for all to hear 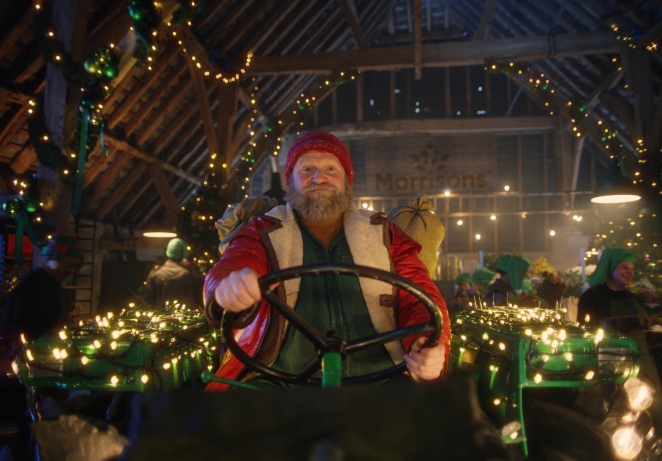 Overall, while I’d usually err on the side of cynicism, it’s easy to see why adland has decided to stick to what it knows this year.

Indeed, if the metrics are to be believed, this could end up being the best year ever for Christmas ads in terms of emotional effectiveness. And when it really comes down to it, Christmas is an emotional time and the very best creative is the stuff that “hits us in the feels.”

So, let’s not try to question it too much and just enjoy the comforting nostalgia buzz while it lasts. Tis the season, after all.