It takes a moment to realise you've been faring on the wrong path for a while. When life gets in the way and everything you do becomes a necessity to forge ahead, it is way too easy to lose focus on the things you love. Today, Polish-born illustrator Marcin Reznik (or Martin, for creative pals) taught us it is just as easy to get back on track and live off something you truly love.

And while we all wait for that epiphany to happen, Martin has taken his life into his own hands and is now one of the top 10 most exciting illustrators on Creativepool. His personal way of fighting the pandemic by improving on his weakest points is equally something most of us will envy him.

We're sure you'll enjoy his story below. 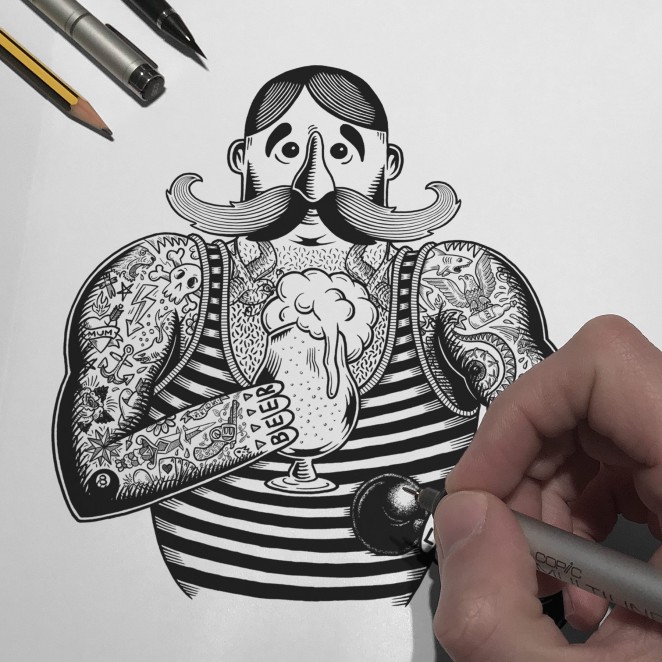 Since graduating in 2013 from Illustration and Printmaking at East London University, I was busy designing and screen printing for my own eco clothing label 10tacled, while at the same time trying to keep some freelance projects going. In 2015 I became fully involved in designing jewellery, branding and web presence for my partner’s jewellery brand Magpie’s Loot. Running two businesses was quite hard, as we had two small kids to take care of and we were both trying to “make it big” while working from our living room in a small London flat. Two years later we managed to get out of the house by teaming up with a local clothing designer to open Bamboo & Bee, an artist-led boutique and creative studio in Roman Road (Bethnal Green), the heart of London’s East End.

It was last year, when I realised I was spending all my time attending customers, writing newsletters and trying to learn how to code a website. At the same time I was drifting away from what I really loved, which is drawing and being creative. Two years past by and I didn’t draw even a single silly doodle. Once this struck me, I decided to go my own way and focus completely on my illustration career. It wasn’t an easy start, but luckily a friend of mine introduced me to a few craft breweries and the commissions slowly began to flow.

I have lived and worked in East London for nearly 20 years now, basically half of my life. Nowadays, suddenly and sadly, I don’t work for nobody, as the coronavirus situation wiped out all my projects. Prior to that I’ve been mainly freelancing for craft breweries designing beer labels. Initially, the new reality felt really gloomy, but then I realised that maybe I could turn this around.

Since I have a bit of spare time on my hands now, I decided to put all the effort into my online presence, something that I always struggled with. It also pushed me to explore new areas that could potentially take my illustration skills even further. 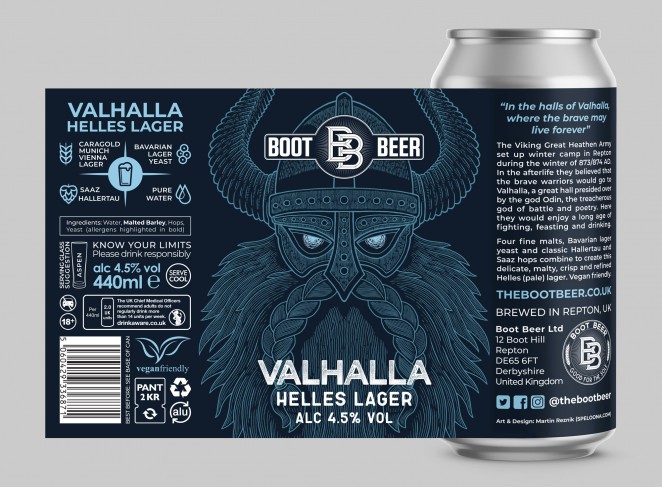 Drawing is my passion, and the only thing that I am really good at, so it is difficult to speculate what I would be doing, if that option would vanish. My girlfriend thinks I’m a caveman, so maybe I would retreat to my cave, somehow find the way to make fire and, using charcoal, draw human genitals in coitus all over the walls, for the future generations of archaeologist to study and the general folk to gawk at in pretentious manner.

I usually start with a bit of online or book research and then move on to the sketchbook. It is there that all the decision-making takes place using pencil, pen or watercolour. At this stage I would probably also experiment with how various flavours of craft beers impact my handling of different drawing tools.

Once this process is over and I’m happy with the results there are two ways the illustration can proceed. I would either work on a lightbox with ink and watercolour for the analogue finish, or scan the drawing and take it to the next level using my Wacom Cintiq tablet and Adobe Photoshop. In the past I’ve been also employing many different printmaking techniques, but these require access to a specialised studio with presses, and are generally more time consuming, which proves complicated when working to a tight deadline or on limited budget. 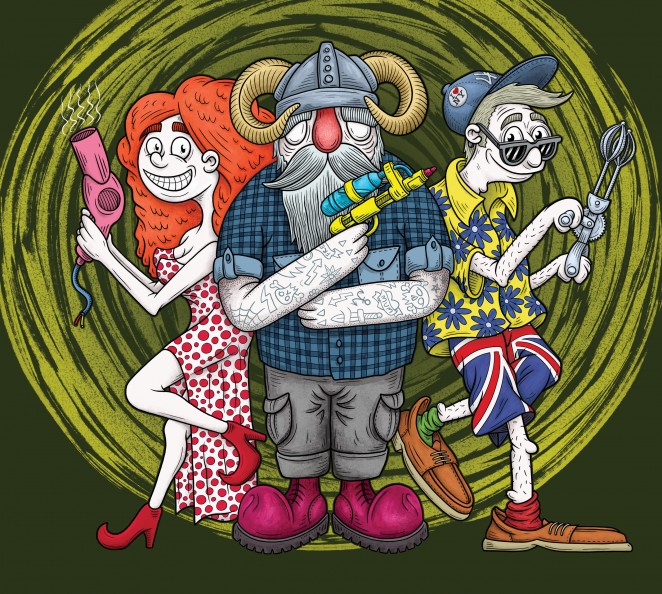 For many years I had a very analogue approach to drawing and I scoffed at digital illustration, particularly anything created with Adobe Illustrator, which I perceived as soulless and repetitive. Coming from the very traditional printmaking background, I deemed art that didn’t involve getting absolutely filthy with inks in the process as invalid (how snobbish). At the same time, paradoxically, I was romancing with Photoshop to create collages, photo manipulations and to retouch my drawings and make colour layers for screen printing.

Eventually, I realised my own hypocrisy and decided to embrace digital art in any form, to the extent that nowadays I am almost unable to work without it. Digital drawing and painting evolved so much in the last ten years that it became equally good, if not better, than the real thing (well.. maybe not). Last year, as an incentive for giving up smoking, I bought a small Wacom Cintiq tablet and a pack of Photoshop inking brushes and completely fell in love with my new gadget. Suddenly all the pain of redrawing on the lightbox, careful inking, and the anxiety, that the drawing can be ruined at any given moment with one wrong flick of the pen, was gone forever!

This is not to say that I abandoned analogue drawing for good. All my illustrations still start with a pencil, pen and watercolour in my sketchbook and only once I am happy with the outcome I move to digital inking and colouring on the tablet.

I steal ideas from my kids ;) I like to draw with my children and we invent many drawing games to keep ourselves busy when the weather is rubbish, which also helps me to limit their screen time. Kids tend to draw carelessly, free from rational control and their mark-making is full of happy accidents. As adults and professionals we often lose those skills, becoming too precious about our creations, following trends, briefs or our own mannerisms. Drawing together with my kids helps to free myself from these self-limitations and enjoy the process in its pure and joyful form, very often resulting in unexpected ideas, which I later use in my practice. 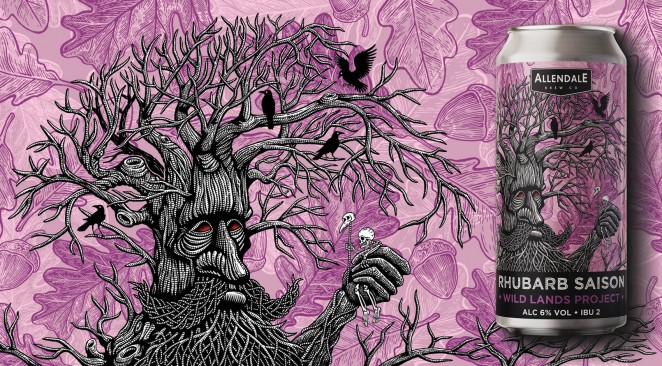 It is rather difficult to single out any of my past projects. I always treat them as a learning curve, trying to experiment each time as much as I can, or as much as the client is comfortable with. I’d like to believe that I am getting better as I progress, so usually the last project would be the best and the one that I am most proud of (with some exceptions).

There are some important stepping-stones though. I will never forget the thrill of doing my first editorial for New Scientist and getting published internationally. Also, since designing a craft beer label was always on my bucket list, my very first label for Redchurch brewery would be the one to remember. My most recent beer commission is yet another stepping-stone. It became very complex in the process, involving narrative, character development and even some custom hand-drawn fonts, therefore hopefully paving the way to my next dream project, which is a children’s picture book.

There are few forest patches around London and, whenever we are blessed with decent weather, I like to explore these together with my family; Hainault Forest in particular, which is a short drive from our home in East London. Few years ago we even made an illustrated map of the Hainault Forest sculpture trail together with my son for his birthday party. We also go on regular camping trips in various parts of England, which I find to be the best way to escape busy city life for a few days and pump some oxygen into the brain. 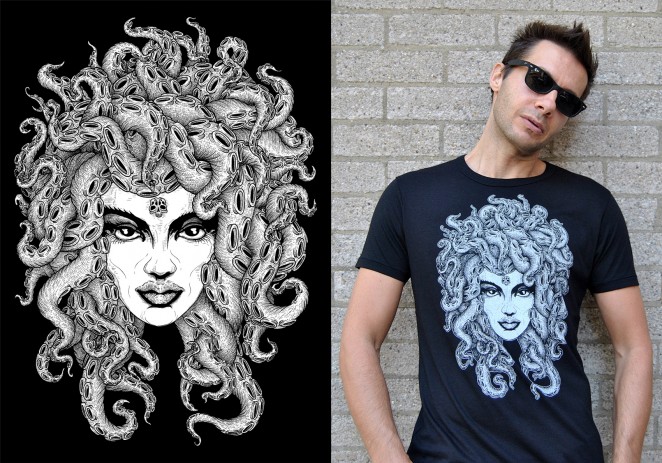 Stop looking at other people’s work. Focus on your own ideas. In the age of Internet and social media we see enough stuff on daily basis to be inspired for years to come. In my personal experience this overload of “inspiration” led to the lack of confidence in my own practice, as I spent a lot of my time comparing my skills against the best in the field, who just happen to be one click away. It was only when I stopped clicking that I started to produce work, which I suddenly was very happy with, and it began to attract commissioners. Give yourself a break and make something awesome!

There are still many commissioners, including big companies, who seem to think that artists and designers feed themselves and their families on thin air and pay their bills with napkin doodles (nope, we are not Picasso). I’ve been asked many times to do design work, which would take days or weeks to complete, for 50 quid or even in some cases for free. “It’s good for your portfolio.” How many times each one of us heard this old chestnut? Students and young designers, who often give in to this idea, sadly fuel this trend to their own disadvantage later in their career, but also undermining more established colleagues (please don’t get me wrong, I am also guilty of this malpractice in the past).

The only way to change this is from the inside. Artists can only gain respect of the commissioners once they start to respect themselves and demand fair compensation for the brilliant work they are producing. The Association of Illustrators runs a campaign to help illustrators remember that their work is #notahobby.

How to thrive beyond Black Friday | #HolidayMonth

Andy Wilson, Media Director at Dropbox, gives us his thoughts on what Black Friday and Cyber Monday mean for online creators and entrepreneurs and outlines how to market a small business online and get the most out of the event and its immediate...