It's easy to tell those who have an ardent passion for what they're doing from those who don't. And it is enough to glimpse at one of Begoña True's illustrations to tell which of the two groups she naturally belongs to.

We caught up with one of the most talented illustrators on Creativepool to discuss a childhood passion and the secrets behind her creative process.

I draw and paint since I was a child, and everybody knew of this, so later when I grew up people started requesting me commissions of portraits, landscapes of their towns, paintings for their companies, and then when internet appeared also logos and backgrounds for their web pages. Though in the beginning I had to work in other jobs as well for what I made through my art wasn't enough to live on.

I am currently based in Faro, the south of Portugal, though I was born in South Africa and moved to Spain when I was 9 years old, for my father is Spanish. I lived in Cádiz until I was 22 and then moved to Madrid, and then came here.

I work as a freelancer. 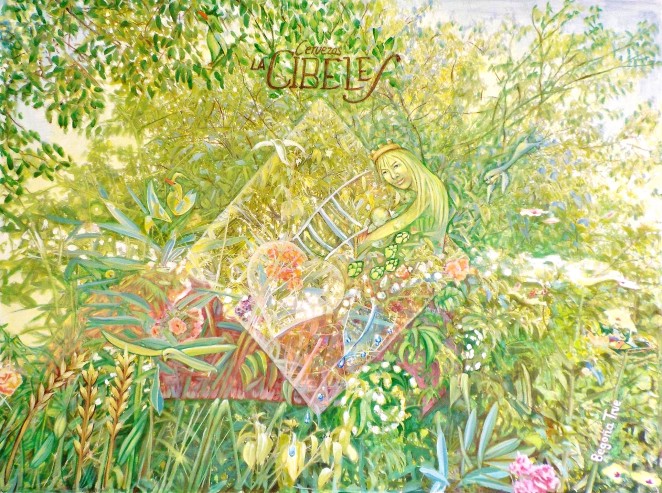 I have different ways of creating, but first I have to explain something.

I always had a wild imagination when I was a child. I used to spend hours in my own dream world. Naturally my imaginary world would come to life in my drawings. I never took art classes, all I needed was to take a pencil and my creativity would flow, but as I started growing up this world slowly disappeared, and when I began to create art for selling I did what most painters do, landscapes, portraits, animals, still lives...

Illustrating for children's books brought back those beautiful drawings that reflected my dream world, and the love and tenderness that they inspire me. One day I was looking at a blank page not sure what I wanted to draw and I started seeing these cute little animals popping up there, so I started to draw them, later on I perfected this technique by scrawling and doodling on the paper and then imagining things there to draw. The illustration “My garden” was done this way.

As I started to grow up, my imaginary world slowly disappeared. Illustrating for children's books made brought it back.

I have to say that though many of my illustrations are fantasy and magical things, I also really enjoy creating normal things. One of the things I enjoy a lot is creating the interior of houses of the characters of the stories, specially if they are children and babies, the little cot where the baby sleeps, the wall paper and curtains, the bath with the shampoo for his hair,... It makes me feel as it was for a real person and I make it with lots of love and tenderness.

However I still do landscapes and architecture with watercolours for I really enjoy them still. There is something about watercolours that seem magical to me even if the painted theme is realistic.

It hasn't much, what it does do is give me the possibility of retouching a bit an illustration if I think it needs it. The internet has however expanded the way I get commissions. 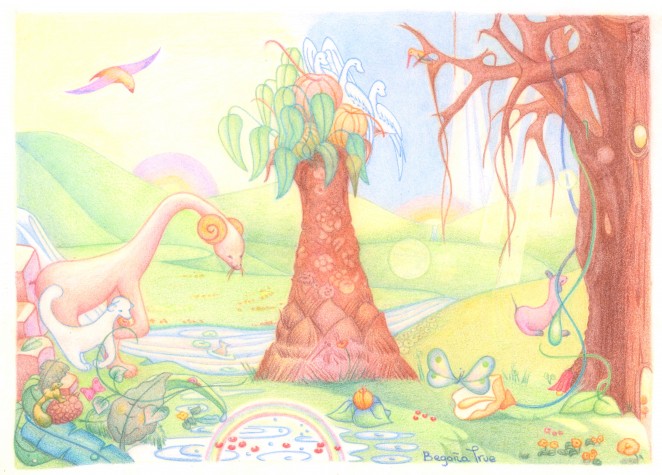 Accepting only the commissions that I think I will really enjoy. And doing them always with great love and care.

“Party in my garden” I really like the tender and fun feeling of it, its like the perfect world filled with love and joy.

Spending time with friends and going for long walks, and playing as much as I can, normally with my friends kids for adults don't play that much :-) 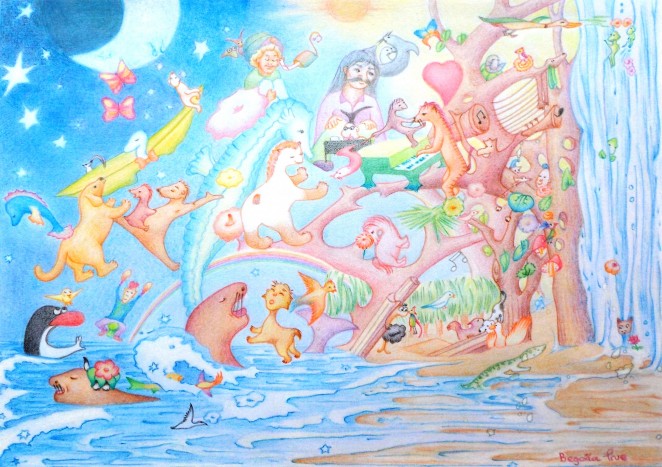 Do only what you enjoy, there is always a way to do what you love, and do it feeling this love, pour into your creations. Other people will feel it too. And tell everybody what you do, you never know where your commissions will come from.

To not follow what is in vogue and listen to their hearts instead. They would be surprised to see what their customers really like when offered a wider range of possibilities.

I did this painting once for a Beauty spa that also did beauty treatment courses, the owner was looking for a painter that could make a painting for her that would represent her business, she wanted something different but didn't know really what. When she saw my work she knew that she wanted something done by me and gave me total freedom to create it. The result is “Nurturing Nature” a painting where you can see how the plants are massaging a women who is laying on the petals of a big flower. Something interest is that when later on she closed her business because she wanted to move on and do other things in life, she returned the painting to me saying that it had achieved its mission with her and would probably need to move on as well to another owner and place where people could enjoy it instead of being hang in her house. 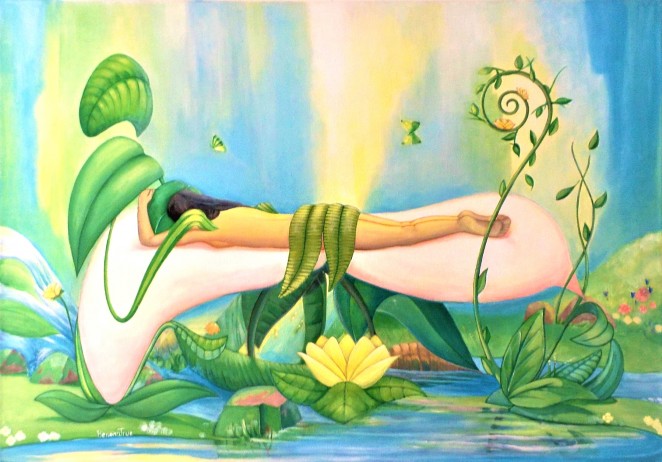 Another piece for a business I did began actually as a photo I took from some tress with flowers and the grass surrounding it. I had already taken some photos of the grass and painted upon them the things that I saw in them through my imagination so others could see what I saw, it was just for fun, but the owner of a beer company that I met one day loved them and wanted a painting in this fashion about his company called “La Cibeles”, a Greek goddess that represents abundance and nature and so I created it for him, the painting is called “Cervezas La Cibeles” of course.

Make it easier for aspiring creatives, and sometimes even professionals, to find these job openings, it's hard sometimes to even know about them, let alone to apply to them. Though as said above many commissions will come through people you know.