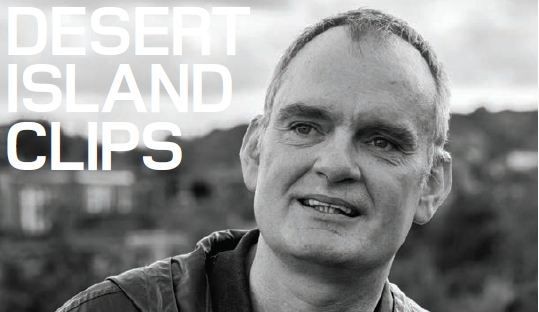 Theo Delaney is a multi award-winning director of advertising commercials. His work is predominantly comedy based and his love of football is a major influence on his work. He is a lifelong supporter of Tottenham Hotspur and regularly appears on The Spurs Show podcast.

If my memory serves me correctly you started out as a writer for Direction Magazine back in the '80s. How did you make the jump into proper directing?

Well, I started as a runner and became a production assistant but I was hopeless at it so I diverted into journalism. I did two cover stories for Direction in consecutive months that changed my life. The first was on the director Adrian Lyne. I was sent to see him in Hollywood when he was basking in the success of Fatal Attraction and was starting work on Jacob's Ladder. He told me his story, how he'd hated school and had got a job in production which he'd been useless at but how he'd become obsessed with the idea of being a director. By sheer force of will he'd made himself a commercials director and, subsequently, a movie director. It made me think for the first time that I could be a director because, like him, I had no education and a history of ineptitude in the production department.

The next month I met Tony Kaye who was just becoming a superstar in commercials and he'd triumphed over even more adversity than Adrian to become a director. Tony told me I could be a director. Eventually, a couple of years later, he gave me my chance. He was hugely inspiring and I owe him a lot but he hasn't spoken to me since I left Tony Kaye Films because he was very cross about it.

I noticed on MySpace that you're a big fan of Laurel and Hardy. Does their kind of comedy influence what you do?

I wrote a little piece for Direction magazine on television once and asked various luminaries to sum up the medium. The late John Webster, who I was totally in awe of as an advertising creative, said 'television has given people the opportunity to witness the most important event of the 20th century ‘Laurel and Hardy'. This is hard to argue with.

But I already loved them because my Dad is a huge fan and my brothers and I used to watch them all the time with him when we were kids. 'Sons Of The Desert' is one of my four or five all time favourite films. It's a comedy masterclass. Brilliant dialogue, brilliant characters, brilliant farce and slapstick and the best comic acting there has ever been. So I'm constantly influenced by them.

So an agency sends you a funny script and you think yeah, I fancy shooting that, or is it more the case that you see some potential in a script and you sit down with the creative team to make it work?

It varies. Some scripts are pretty finished when they arrive and don't need changing. In some ways that's a joy because  if it's a good script  you know all you've got to do is deliver the right execution to the highest possible standard and you'll have a winner.

But increasingly creatives come with an idea that they want you to develop with them which I also love. You get to use your experience and know-how as a filmmaker to help make the idea stronger and better suited to the medium.

I love those videos you shot featuring football club directors. How did they come about?

Perfect example of a fantastic client, great agency and brilliant creative team all interested solely in making something as good as it can be. The client was Simon Freedman whom I've subsequently done a lot of work with at the FA. The team was Stuart Outhwaite and Ben Middleton at Mother. They'd heard I was a football nut so they invited me in to talk about the idea of going to these lower division cubs and getting the chairmen to rehearse these ridiculous stunts. So we got a bus and went driving off round the country. There were no scripts, of course. What I had to do was set up situations and try and steer them towards humour. It's a very exciting way of shooting and pretty scary too because you don't know what you're going to get  the complete opposite of the bolted down storyboard being covered off in a studio (which I must say I also enjoy).

You can only do that if everyone involved has got the bottle to handle the uncertainty.

As a director, I guess work can take you just about anywhere. But is there one place where you do your thinking  and what kind of equipment do you usually have around you?

When I'm filming, the equipment might be a small handheld camera or  like last week when I was filming a Bernard Matthews commercial  a couple of 35mm movie cameras, a great clunking motion control rig, a Technocrane and a whole ton of lights.

Once a project's up and running, I'm thinking about it constantly, trying to come up with solutions to problems and little things that will improve it. I often walk to work which takes about 45 minutes and I try to run for 40 minutes three times a week. I also like to eat alone in restaurants once or twice a week. All good thinking slots.

What are you working on today?

One of the best things about commercials is the diversity of the work. In the space of a year you can make a drama, a farce, a western, a polemic, a musical, a fly on the wall documentary and a film starring only cats.

Right now I'm editing two new Betfair Front Room commercials. It's a campaign we've been working on for most of the football season for Albion. It features five football fans talking, for real, about football. It's a little like the Coca Cola films in that we film without scripts and I have to gently steer the proceedings and then eek out the ads in the edit.

And I'm also post-producing a spot for Isobel which could hardly be more different. It's a meticulously story-boarded, Glee-inspired musical which is out and out populist. It's big and glossy and emotional and quite funny too. It's for Bernard Matthews and we'll be in Framestore for a week or so doing the digital post production.

What would you say has been your biggest challenge so far?

I think the biggest challenge was actually getting the hang of directing in the first place. I think it's the kind of job you only learn by doing it. When you first start, although you have ideas and taste and judgement, you don't know how to go about getting the maximum amount of good stuff for the cutting room. And that's the point of a shoot.

For the first couple of years it's a bit like you're on one of those wild bucking bronco horses. You've got to hang on for dear life and - if you do hang on - eventually you tame it. It stops bucking and slowly you learn to steer it. Sheer bloody-mindedness and a refusal to quit gets you through those early days. Tony Kaye, Adrian Lyne and my other great mentor Barry Myers had all told me of the despair of being initially clueless so I was kind of ready for it.

How have you changed from the guy that first started out in this business?

I'm just better. You learn and learn the more you do. I think, for a director, experience is especially valuable. It's only when you've got it that you appreciate what a priceless thing it is. It helps you to remain calm and make better decisions. And directing is decision-making as much as anything.

What's the first thing you do with a new script?

Read it through and assess it quickly. Is it strong/original/powerful? Could it get some kind of emotional response? Can it be filmed? Can it be filmed for the money and in the time? Very often your first gut reaction is the best indication of whether it will make a good film or not. Then, if you're at all interested in doing it, you quickly start obsessing about the best way to go about it.

Where do you think creativity is right now? Better than 10 years ago or worse?

The majority of everything is shit. Books, TV shows, paintings, records, buildings, ads... everything. Always has been. The proportion of good stuff remains pretty constant. Of course, the work is different because the media is evolving and different things become fashionable and unfashionable but the percentage of good stuff is as high as ever. So I think creativity is as good (and bad) as ever.

Where does your story go from here?

My producer Danny Fleet and I are building the roster at Hotspur and Argyle, and its sister company - Contentment Worldwide - is involved in other media, which is interesting. I love new media and I like bringing in and working with new talent.

But I don't think ahead much (maybe I should!). You get so wrapped up in whatever the current project is that you don't really have time for it.

Last question  and it's a big one. Which Arsenal players would make it in the Spurs 1st team?

The making of the Betfair Front Room