Making the Converse Chuck Taylor All Wah a reality

Exactly three years ago, we launched our first ever brand project for Converse, working alongside Google+, in which we challenged our members to Hack a Chuck. This was the result:

The overwhelming favourite was this lovely idea by Alistair Campbell and his team at Agency Republic (now part of Critical Mass) who produced this winning entry (all winning entries can be found here):

Three years later I am delighted to announce that this has now become a reality — introducing the very-limited edition ‘All Wah’ sneaker — a unique and never-been-seen-before integration of the legendary Wah pedal into the classic Chuck Taylor All Star sneaker. The All Wah brings a new level of freedom to guitar playing, with the sole of the All Star transforming foot movement into a smooth Wah modulation using cutting-edge micro-technology:

We had the pleasure of speaking to our friends at Converse about the project and how it came into being:

So let’s go back to three years ago and the original collaboration with Creative Social that we ran. Did you ever think that you would end up where we are today?

Definitely didn’t see this coming. The original brief for the Creative Social Chuck Hack project was simple: “Here’s a pair of Chucks. Do something amazing with them.” Really that could have gone a number of different ways but in the end we had dozens of terrific ideas hacked into Chucks.

Was this the only product you thought about developing? Was there anything you delivered off the back of it?

There were a few we looked at for development. The challenge with a project like this is always resources needed to push it forward. We loved the Chuck Stop skate concept and we got to a prototype stage of an LED Chuck. But the All Wah always stood out — it’s clever, fun and connects closely to Converse’s deep heritage in music.

Let’s get back to the product itself, how it work? 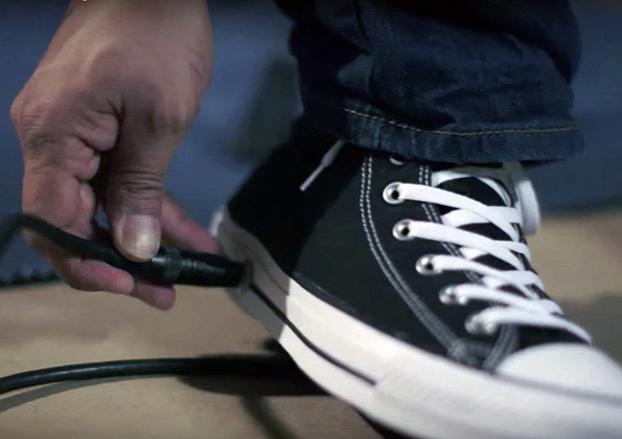 Simply move your foot as you would using a traditional Wah pedal and the sneaker does the rest, with intelligent sensors capturing the movement and communicating it wirelessly via Bluetooth to the Wah Box for the Wah effect. It can be used in a classic stage set-up with an Amp or connected to a MAC or iPhone. Lightweight, rechargeable and Bluetooth-activated, the All Wah delivers the sound quality of a classic analogue Wah box but frees you from batteries and wires. And you’re not sacrificing sound quality — the pitch is spot on when compared to an actual Wah Wah peddle.

How can I get one?

Alas fewer than 25 pairs of this wireless, wearable Wah pedal have been produced, with all pairs reserved exclusively for special friends of Converse.

Are we are special friend?

Of course you are. But in this case special friend also means guitarist. In all seriousness, is there a chance that you may develop more, if the demand is there? I’m thinking Kickstarter.

Do you think it is credible for a brand to be using a platform like Kickstarter?

The response has been overwhelming since we revealed it. Demand from both musicians and fans of musicians has far exceeded any expectation. We’re exploring what’s possible at the moment and how fast we can make it happen.

Who was instrumental in delivering the project?

The original concept came from Critical Mass. The first hack was amazing but was also the very definition of a hack. To make it wearable, durable and deliver a high standard of output we worked with Cute Circuit, a fashion label out of London who have done some pretty spectacular wearable fashion items already. And then of course there’s the long list of people within Converse who all pitched in their time and talents to make it happen.

Going back to the original competition? Have there been any additional benefits? And where does Chuck Hack go now?

The biggest benefit of the original project was the ability to connect with so many diverse talents and see the level of imagination available to us. Beyond the All Wah we ended up working with a number of the participants on projects of varying levels — from additional Chuck Hack content for our social channels to global product campaigns. This was in no way meant to be a pitch for new work but the exposure to the talents who are part of Creative Social gave made it easier to find the right guys for the right briefs.

Finally a question we ask all our Socials, what’s the best piece of advice you have ever been given?

My two boys rarely agree on much but they came together to warn me recently “Dad don’t eat all the ice cream or nobody will like you.”