Blue Monday is more than just a seminal song by New Order, it’s also (supposedly) the saddest day of the year. Now, personally, I’ve always found every Monday in January equally bleak. Indeed, I feel significantly more downcast today (the 23rd) than I did last week on the day itself (the 16th).

But I get it from a marketing perspective. Why not invert the idea of celebration and instead create a day of commiseration? It’s certainly a smart move and one that countless brands have chosen to jump on board this year.

This year, I thought I’d pull together a few of the best Blue Monday ideas, focusing specifically on billboards. After all, is there anything more depressing than commuting? These are all activations designed to make the morning and evening commute seem just a little less hopeless.

It might not be Blue Monday anymore (Purple Monday, anyone?) but I think these campaigns feel just as relevant today, or indeed any Monday in Winter.

Letting the light in

Volkswagen and BBH looked to brighten up Blue Monday with a first-of-its-kind billboard that acted as a giant SAD Lamp. This giant SAD lamp, installed near Waterloo station on Sutton Walk bridge, emitted light to mimic the sun with its positive, mood-lifting effects illuminating a cold, overcast January day with some very welcome vitamin D. 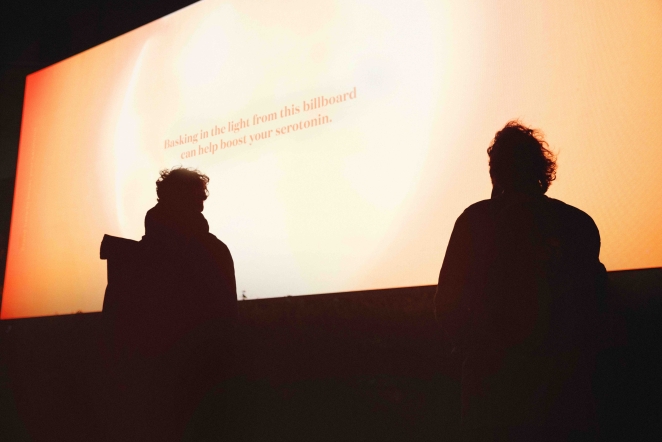 SAD lamps can be used to help individuals with (winter-onset) Seasonal Affective Disorder – a type of depression that occurs primarily during the winter because of the reduced levels of daylight. Commuters were able to pause and recharge in front of the billboard during the “saddest day of the year,” with the billboard itself powered by 100% renewable electric energy from Green Voltage UK.

Using the same SAD technology used on desks and in the home, the billboard was made up of lots of smaller SAD lamps and designed to radiate positivity by mimicking sunlight. A wonderful idea and one that I honestly think should have been made permanent (he says, basking in the glow of his very own office SAD light).

Another brand to use the SAD light tactic was the nutritional supplement brand Solgar by Saatchi & Saatchi. Golden Lights was a cross-city OOH campaign transforming 12 digital billboards across the UK with S.A.D lamp-inspired, light-led creative.

The work, which won funding at the Ocean Outdoor Digital Competition 2022, used Ocean’s OOH technology in London, Manchester and Birmingham to use digital billboards to host creative emitting serotonin-boosting lux levels to remind commuters that shorter days can affect our moods and immune systems.

The same tactic was also used by doughnut brand Krispy Kreme in an activation spearheaded by Good Relations and VCCP Media, with help from Open Outdoor and Clear Channel. The SADvert campaign was developed in response to research revealing that one in five Brits admit to getting no more than 15 minutes of sun each day during January.

The main difference between this billboard and the Volkswagen one is that commuters needed to touch a physical button to activate the “light therapy”. The 3D special build housing the billboard was constructed in Salford, a location selected due to the region getting less than 2 hours of sunlight per day on average during January and featured giant decorative doughnuts. Still, as much as a like doughnuts I honestly can’t say which of these I like better. What do you guys think?

Feel Good Club, the inspirational Instagram account led by wives Kiera & Aimie Skillen, in partnership with Jack Arts, spread messages of positivity across Manchester, Liverpool, Sheffield and Birmingham on Blue Monday by emblazoning motivational messages on poster sites all over the cities. 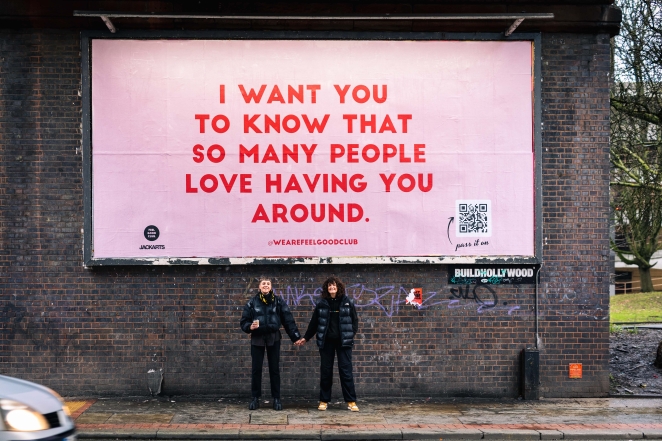 The quotes were chosen to be “things we feel we need to hear ourselves, or that we think other people need to hear at the moment too.” The idea was to inspire people to send that message to friends or loved ones in the form of a postcard, entirely for free, and spread the positive vibes across the UK.

A nice idea, for sure, but some of the quotes did come across as a little “live, laugh, love” for my cynical tastes. Oddly enough, given my atheistic bent, I was more taken by the “Beacon of Hope” installation from Christian Aid.

Created by Impero and Goodstuff and brought to life by Ugandan artist Matt Kayem, the stained-glass-inspired piece is still on display on the grounds of Southwark Cathedral (until Sunday the 29th of January, anyway) and is a genuinely beautiful and inspiring piece of art that just so happens to be a billboard (sort of).

When people ask me what was my favourite film of 2022, I’d probably join almost everyone else that saw it in claiming Every Everywhere All At Once. But if you asked me what was the most inspiring film that I saw last year? That would be a...

The phenomenon known as SXSW was launched in Austin, Texas, USA, back in 1987. Starting on 10 March, the unified 2023 SXSW Conference will introduce what's next in the worlds of film, culture, music, and technology, providing rich opportunities for...

What will adland look like in 6 months? My 3 advertising trends of 2023 | #PredictionsMonth

Only a fool would state that they know with absolute certainty what the landscape in adland will look like in six months’ time. We are living through a time of almost unparalleled unpredictability but one overarching and undeniable trend that...