Kindness matters. A simple act of kindness can boost both your mental health and the one of others, creating community and demonstrating support to those around you. Kindness is also the theme of this year's Mental Health Awareness Week, hosted by the Mental Health Foundation.

Though there really isn't a specific brief for the creative industries, everyone is encouraged to spread the word the best way they can, showing support to those afflicted by mental health issues and raising awareness from 18–24 May. Considering how hard the past few months have been to most of us, there really is no better time to show some much needed support.

We have already shared our top 6 tips on how to handle your creative team’s mental health during the pandemic. As we are in the middle of Mental Health Awareness Week, I figured I’d collect some of the best works on mental health in the Creativepool community and present them to you below.

The main problem of having to deal with a global pandemic is that people are now stuck home, some even alone, with their own brains. For those suffering from depression, it can be even harder to open up and talk about their illness. Back in 2018, Iris solved the issue with just three dots.

“Talking about your depression is one of the best ways to beat it,” their case study video says. The agency recruited some of the most talkative celebrities (including Stephen Fry, James Arthur and Ruby Wax) and replaced their voice with the three dots you would usually see in an instant messaging app.

The campaign was named #LetMeTalk and, in partnership with mental health helpline charity SANE, it was launched to encourage people to fight depression by finding the strength to talk about it. There’s no need for more words to describe the beauty of this campaign.

Did you know Charlie Chaplin suffered from bipolar disorder? That Oscar Wilde was clinically depressed, or that Albert Einstein had ADHD? I didn’t, until I saw Alex Wilson-Smith’s work for the NHS borough of Sutton & Merton.

A lot of historical figures and celebrities had some kind of mental health illness. Most of those figures we can deeply relate with, and the idea behind Alex’s campaign for the agency Eleven Fifteen was to reduce the stigma of mental health disorders.

Though the campaign was created years ago, we can safely say it will never get old, and it even was quite groundbreaking at the time. Alongside OOH graphics and posters for local NHS practices, the campaign included a social media questionnaire matching people to a respective celebrity, enabling them to connect with people with similar profiles. 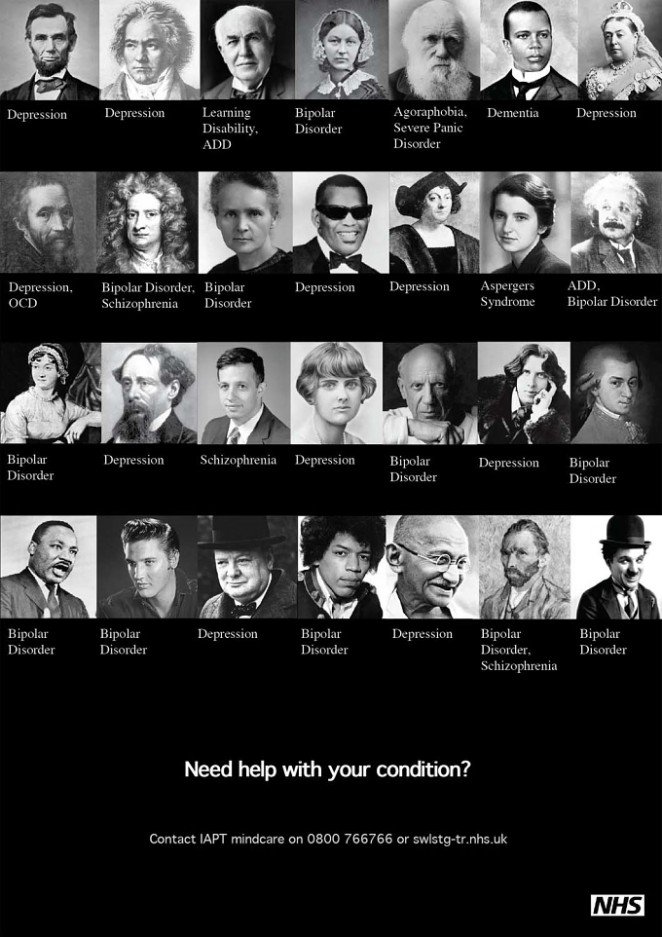 It may be tempting to give in to substance abuse and drug addiction when suffering from some kind of mental health illness. Unfortunately, this is true of all ages – parents, teenagers and young adults alike.

You’re Not Alone, a film directed by Alex Miranda Cruz for Sandstone Care, shares the voices of all these age groups who are wrestling with mental health illness and dangerous addictions. The result is a powerful, intimate and authentic retelling of journeys of hope and dignity, heard directly from the front lines of mental health and addiction.

Needless to say the film is beautifully shot, striking the eye with powerful visuals while telling the stories of the protagonists with delicate and compelling mastery.

Linda is literally one of the latest additions to the Creativepool community, but her first uploaded projects already overflow with passion and creative energy. One of these is No Quick Fix, a full-on campaign created to raise awareness of mental health issues across all ages.

Rather than focus exclusively on mental health illnesses, No Quick Fix includes a set of five A6 booklets exploring the side effects of the most commonly prescribed mental health medications, ranging from nausea to headaches and beyond.

The campaign combines abstract photography (inspired by rejection) with colourful illustrations, and it also includes a book of interviews with mental health sufferers. 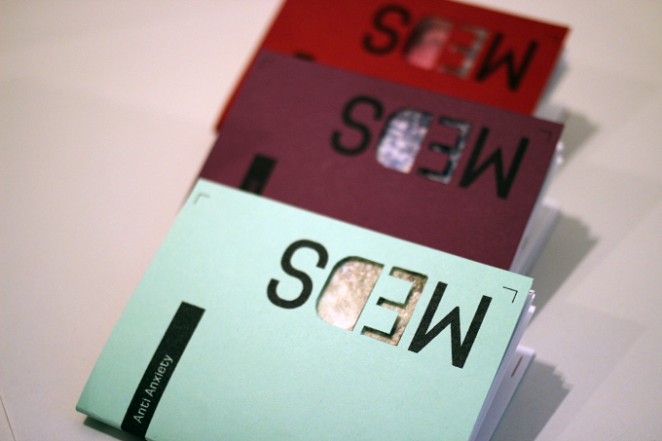 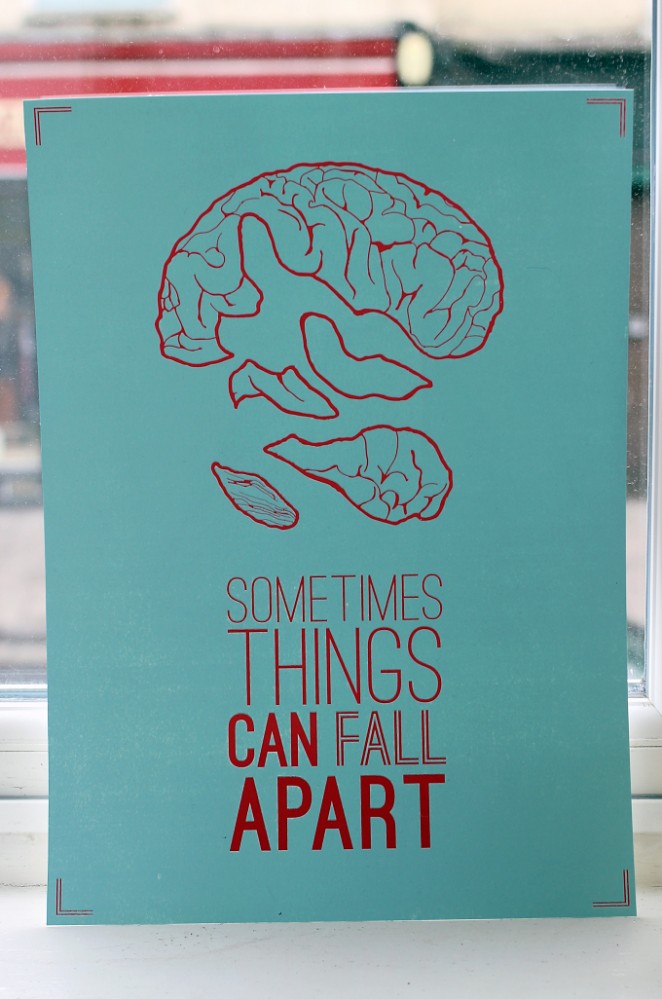 Little more than 18 months ago, Jumbla partnered with the National Youth Health Foundation to craft a short video for social media. The video told the story of ‘Lucy,’ who lived through the experience of severe psychosis and then went on to become a counsellor at meditation and mindfulness app Headpsace.

The video blends Lucy’s narration with abstract visuals to suggest the mind-altering experience of living through psychosis. Though less than three minutes-long, Jumbla’s video feels like a journey in the scary world of a sufferer of psychosis and was conceived to bring awareness to the illness. All with beautiful animations by Jumbla.

And believe me, Lucy’s story is quite something to hear.

You should know by now that there is always somebody to talk to. Literal believers in this principle, mental health charity Chasing the Stigma has made this simple sentence the tagline of its Hub of Hope, conceptualised by Gavin Sherratt’s agency Mashbo to bring all of the UK’s mental health services together in one place.

The Hub of Hope is a website in which finding help is as simple as inputting your postcode and looking up the closest results. The app will output all of the registered resources to help mental health sufferers get help quick, here and now.

The app’s design has obviously changed since it was first launched in 2017, but the core principles remain the same. And because it matters to make users feel at ease, both app and website use colourful and minimal UX design, in an attempt to make each distressed user feel comfortable and at ease. But the most unbelievable aspect of the Hub of Hope is perhaps that anyone, anywhere, can find support for any mental health issue, from PTSD to anxiety and suicidal tendencies. 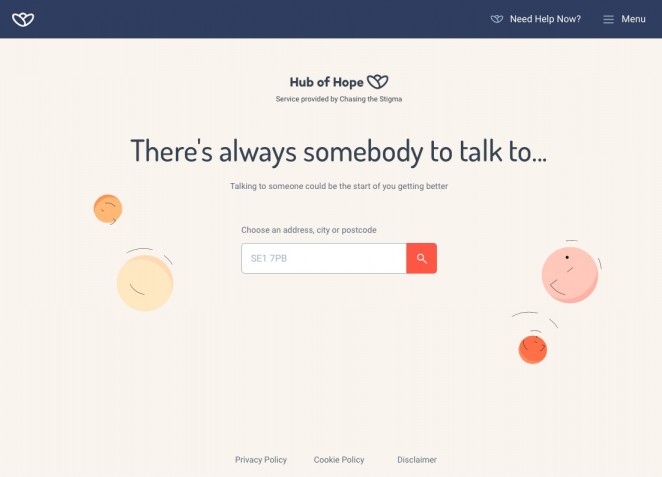