How coworking is disrupting office culture

Technology has played an important role in challenging the traditional concept of ‘work’. The internet, as well as the mobility enabled by laptops and smartphones, has created a nomadic workforce. Partly as a result of this shift, the number of self-employed Brits rose from 3.8 million in 2008 to 4.5 million in 2015. [1] And stats in the US suggest that around 33% of the workforce is freelance or independent. [2]

Coworking spaces supply both freelancers and fledgling businesses with communal offices, bringing individuals from all manner of industries together – perfect for networking opportunities. [1] Prices are similar to that of a gym membership, with tiered offerings depending on how often you want to use the space. These fees typically include a desk plus services such as Wi-Fi, conference rooms, photocopiers, and – of course – necessities such as coffee and draft beer. Rates range from €15 per day at Betahaus in Berlin to £350 per person per month at London’s Second Home. [3][4]

There are 135 coworking spaces in London alone, and these offices offer workers something markedly different to traditional corporate settings. [5] They represent an alternative ‘third space’ in the growing knowledge economy, but how exactly are they challenging traditional concepts of office culture?

Starbucks was the first to position itself as a ‘third place’, combining all the comforts of home and office in a space where you can sit, use your computer and drink coffee. [6] It legitimised the idea of a casual place to get some work done and meet with colleagues. But there are no clear rules around the rate of eating and drinking to justify holding a table for yourself. How long can you really nurse a cup of coffee for?

Coworking spaces remove the uncertainty and welcome you to stay, sometimes until late, sometimes all night. “It’s a natural evolution of technology,” said Sande Golgart, a vice president at flexible workspace provider Regus. “It’s a blend of technology and people getting smarter about getting efficient use out of their space. Nowadays people don’t necessarily need a landline all the time that’s plugged into a wall that they have to go to and sit in front of every single day.” [7]

To rent a traditional office space, you need a financial deposit and have to sign a fixed-term contract – a scary prospect for a freelancer or start-up. The comparative flexibility coworking spaces offer is integral to their success. “We live in a world now where there are more start-ups arising, growing and failing,” says Florinela Zama-Neagra, community enabler and programme coordinator at Impact Hub Westminster. “Our model provides a space that you can use as much as you need to – useful in the early stages of a business, at which point there’s greater uncertainty. You can have a membership for anything from one day a week to full time. We also work on a month-to-month rolling contract, so if things aren’t working out for the business, they can give 30 days’ notice to end their membership. And then they can sign up again as soon as they are ready.” [8]

These spaces are ideal for businesses of a certain size, usually less than ten employees. Yet once a company grows, it may not be suitable to be in a coworking space anymore. “We always get wonderful feedback from companies who outgrow the space,” says Zama-Neagra. “They often say that what they discovered from other people in the space was integral to their growth.” [8] 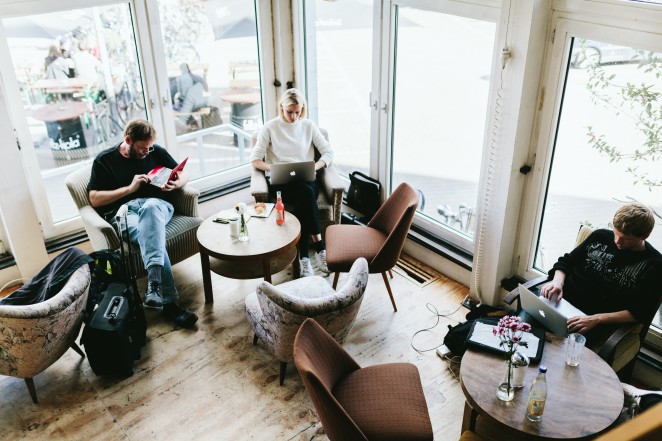 “We want to challenge the traditional barrier between life and work. We want the workspace to be more playful, more creative, more human, more collaborative,” says Zama-Neagra. [8] These spaces provide the infrastructure for creative people and innovative thinkers to define a new type of economy. “We believe that the 21st century economy will be largely fuelled by capital other than monetary capital,” says Derek Neighbors, co-founder of Gangplank, which has coworking spaces in the US and Canada. “Meaning influence capital or social capital, human capital – we believe that those are going to be much more powerful as we shift from an industrial to a knowledge-based economy.” [7]

Coworking offices provide a new type of space for a new type of business. With a flexible contract, collaboration and support, early stage companies are able to be bolder and take more risks. “We see types of businesses that might not otherwise exist,” says Zama-Neagra. “They wouldn’t have had the environment to develop their ideas or had the financial opportunity to bring their vision to life. There are many that fail too – that’s the nature of the start-up world. But coworking spaces reduce the barriers to starting a business.” [8]

Influence capital or social capital, human capital – we believe that those are going to be much more powerful as we shift from an industrial to a knowledge-based economy

Communal offices do more than just supporting the modern entrepreneur. They’re signalling to the rest of the working world that a new mindset is emerging, showing established companies that there are better ways to work. “I think that this movement is teaching not only individual freelancers a lot, but is teaching corporate America a lot about how people interact, what makes them effective at creation and is really defining the future of how companies interact with each other on a deeper level,” says Neighbors. [7]

But it’s not for everyone. “I interact with hundreds of people in the space every month,” says Zama-Neagra. “From what I’ve seen, some people can get overwhelmed by being in an open space and a buzzy environment – they find it distracting. They need walls and a quiet space. The coworking space suits people who are open to trying something new. That doesn’t just mean with the space, but they are open to the opinions and advice of others, trying new things with their business and taking a few risks.” [8] 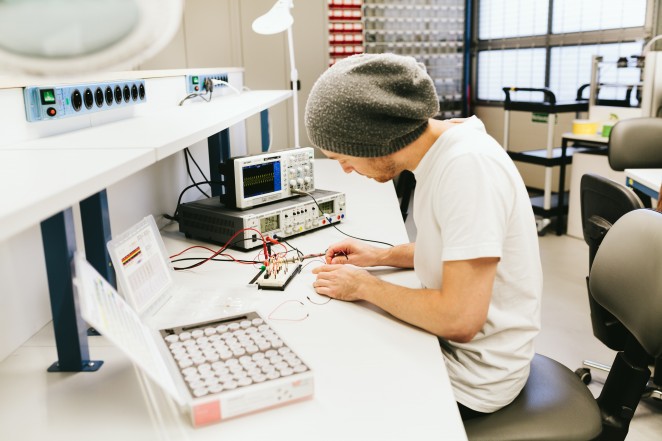 Coworking spaces are designed to provide workers with more than a desk. They are designed to provide them with colleagues too – something that’s integral in a positive office environment. “We like to call ourselves an ecosystem,” says Zama-Neagra. “We have the office, but built into the fabric are the events, programmes and talks. On the programmes side, we pick a few topics and do introductory workshops, like how to strengthen a business plan, or how to do your marketing.” [8]

“You come for the space, but you stay for the community,” says Rebecca Brian Pan, CEO of Covo, which is set to open in San Francisco in July 2016. [2] The social aspect of coworking is a real draw. “Some even prefer to work around other people,” says Golgart. “They find it inspiring, they find it more cost-effective and they find that they’re able to be very productive in that environment because of technology.” [7]

We like to call ourselves an ecosystem. We have the office, but built into the fabric are the events, programmes and talks

The social aspect gives members the opportunity to share their problems and successes with others who are treading a similar path. “A lot of start-ups and freelancers don’t have a lot of confidence to begin with and need a little bit of support,” says Zama-Neagra. “For them it’s very useful to be able to see other examples, get free advice from people slightly further down the track. Once you connect with people on a personal level, they are more invested in helping you on a business level as well.” [8]

Coworking spaces are designed with collaboration in mind. They’re purposefully open, communal kitchens provide a nudge for sharing, and beers are encouraged at the end of the day. “We connect creators with each other and with the larger community,” reads the Gangplank website. “We provide both a place to work and an event venue. However, it isn’t about the building. It is about the community. We provide the infrastructure. A place to connect. A place to build authentic relationships. A place to learn and a place to teach. A place to share ideas, experience, and knowledge.” [9] 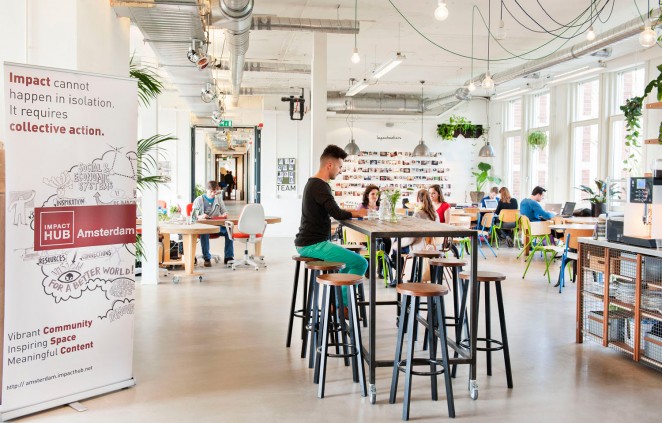 The rise of coworking spaces is testament to the way new generations are redefining ‘work’. Gen Y are entering employment en masse, and it’s estimated that they’ll make up around 75% of the world’s workforce by 2025. [10] Those in this generation don’t see companies as salary providers, and are instead more concerned about societal impact and personal growth. [11] With 94% of them looking to put their skills to work for a good cause, it’s clear they’re after more than a steady pay cheque. [12]

The changes are coming from both sides of the interview table; a 2014 study found that 83% of executives were increasing the use of contingent workers for their businesses. [13] Accordingly, it’s expected that freelancers will make up 40% of the US workforce by 2020. [10]

There’s a new relationship emerging between workers and their work. It’s not just a matter of where and how we’re working, it’s what we’re working for. In a global study of Gen Yers, the most highly reported components of a good work-life balance were ‘enough leisure time for my private life’ (57%), ‘flexible hours’ (45%), and ‘recognition and respect for employees’ (45%). [14] People want autonomy to set their own schedules and to have the freedom and flexibility to get work done. "We're at a juncture in terms of how to reconfigure the way we work," says Peter Gahan, a professor at Melbourne University's centre of workplace leadership. [15]

We want to challenge the traditional barrier between life and work. We want the workspace to be more playful, more creative, more human, more collaborative

Coworking may just be the beginning of what’s to come, as workplaces and work practices are set to become more hybridised. “Perhaps the most significant changes are the ongoing fragmentation of workplaces and the shift in the balance from collective to individual models of employment relations,” reads an ACAS report on the future of workplace relations. “Traditional frameworks and assumptions surrounding employment relations are now becoming increasingly outdated and in need of renewal.” [16]

With the emergence of a new working mindset, coworking provides a solution for people who who’ve grown sick of the stuffy, high-rise offices in metropolises. “The attitude towards participating in an economy is changing,” says Zama-Neagra. “We don’t want to have separate selves, we want our work to be an expression of who we are. You can feel it at the centre of the micro-communities that develop here. These are people who are bold enough to act on those desires.” [8]

See how businesses are applying insights like this at Canvas8.com

Alex Caminer is a Senior Behavioural Analyst at Canvas8. Living at the intersection of psychology, physics and economics, he smiles at irrationality and enjoys being puzzled.