Have you already seen Christmas ads go up? Here's why

There’s been an ever increasing sense of unease around the industry in the past few weeks, as a number of retailers announced that supplies have been slow to come, and there is a labour and stock shortage in the UK expected to last until Christmas at best. Last week, Amazon announced it would pay billions to prevent Christmas shortages, and even Apple has plans to cut iPhone 13 production by millions in the US.

Cars and petrol, toys and tech, turkeys and Christmas trees, even chocolate and milk seem to be running low in the UK, with demand far outpacing the supply. In this context, no one will be surprised to know that shoppers are flocking to the stores early this year, amid fears of missing out.

The panic of early Christmas shopping

All of the above would sound like the perfect recipe for chaos to any marketing department. With consumers starting their shopping weeks earlier than expected, it’s no surprise media plans and spend will be affected.

With fears of seeing Christmas ruined by the driver shortage in the UK, almost half of consumers have begun shopping early, according to a survey by Sitecore. 27% already started in October.

Surely electronics and tech have suffered from similar shortages since the beginning of the pandemic. Getting a top tier (or even mid tier) graphics card has been close to impossible for two years, as it is landing a PS5 from Sony since launch; but the shortages are not just in the tech scene, and they are most certainly not restricted by sector. Felixstowe made the headlines in the UK by announcing it was forced to turn away ships from Asia due to a lack of truck drivers.

With this in mind, brands have started their Christmas advertising early this year, pushing people into the stores, issuing gentle warnings that things may not be available later in November, and definitely not in early December. Some Christmas ads have already gone up in October, including the ones from Gap, Selfridges and Disneyland Paris. Very was so early in the game that they released their ad on October 1st. And the most cautious brands will have tailored their communications to address the shortage crisis.

Of course most agencies will have shot their Christmas ads and started work on their campaigns months ago, practically over summer, as is tradition. Yet already in summer there were warnings that we would experience supply shortage over Christmas, due to petrol prices going up and a lack of labour to deliver the goods. Hopefully your campaign will have been tailored according to that sentiment, and moving away from any product-specific ad.

If you’ve seen Christmas ads and trading start in October, you now know why. This shortage crisis may last until next year, and with massive shortages in sight across the board, your client’s plans for Christmas will be hugely affected now.

If it’s true that flexibility is a virtue in this profession, there will be few opportunities to prove it to your clients like this one. It doesn’t mean you should scrap your plans altogether, but you may want to refocus and reassess your messaging ahead of the shortage, focusing on softer call-to-actions and honesty at all times.

As more and more brands do it early, you may be required to reschedule your plans to avoid missing out. Some customers may not wish to see much Christmas-related advertising until late in November, but others will be glad to see a brand stepping in to address the shortage crisis with timeliness and authenticity.

Of course you could also draw inspiration from those who have done this best in the past. The fast food industry is surprisingly full of great examples on how to manage a shortage crisis. Perhaps the best one is simply from a couple of years ago, when Mother helped KFC address its chicken shortage in the iconic ”FCK”campaign. Bold, unique, authentic, honest.

More recently, as the pandemic caused restaurants to close and shops to furlough staff, Burger King stepped in urging customers to order from McDonald’s – a genius marketing move much in the style of the fast food giant, stressing how important it was to support the entire industry in a time of great crisis.

Not only that: advertisers should be aware of the shifting consumer trends this holiday season, to ensure their messaging remains relevant and their offering is appropriate. According to research by Outbrain, 48% of consumers are planning to shop entirely online this year, perhaps to avoid unwanted contacts, perhaps following a much pleasant experience with online platforms during the pandemic. In terms of demographics, the IPA has found that young adults (18-24) plan to be more sustainable this Christmas, and their shopping habits will most likely reflect that sentiment. All of this should not be ignored as we approach the lead up to Christmas.

When in doubt, aim for authenticity

You don’t need to go that far, of course. Advertisers may simply want to focus on the strength of their own supply chain, if they can make the claim, or simply demonstrate to their customers that they will be there throughout the crisis, ready to answer any and all questions. This will be a frustrating time for everybody, customers included, and it’s much better to go the extra mile in advance than to sit idly and hope that disaster won’t touch you. If you can, be KFC.

This is one of those things that will sound obvious to many right now, but you would be surprised of how many brands simply don’t even address their problems when they arise. As much as I personally love the Disney brand, that is one of the cases in which I see it happen a lot. Whenever a new limited edition toy or gadget is released, scalpers storm the stores and online bots do the same online, then they fly on eBay to resell the same items at ridiculous prices. Disney tries to address the issue by limiting the purchase to “one per guest”, but this remains a much alive issue in the consumer base, and never have we seen Disney address it with proper communications. 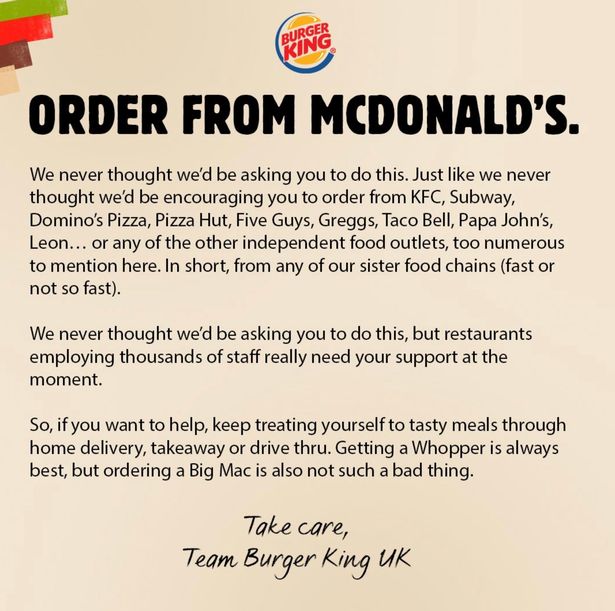 Same goes for Sony and the already mentioned PlayStation 5 shortage. A search online will yield dozens of results of PlayStation 5 consoles sold at stupid prices by scalpers, who are perfectly aware of Sony’s stock issues. Apart from CEO Jim Ryan being ‘upset’ and ‘frustrated’ about the situation, not much has been done apart from trying to reassure customers – without much success, due to the huge component shortage currently in place.

Burger King’s spirit of solidarity and KFC’s bold honesty set an example for all brands looking to address the current supply shortage issue in the holiday period. As more Christmas ads and campaigns start appearing online, advertisers should aim to cater for their audiences by starting sales early, sending updates about their own stance in the issue and reassuring customers as much as they can, within reason.

One thing is certain: if these issues carry over into the new year, it is likely that advertisers will start planning and scheduling their holiday campaigns much earlier in the year, trying to build hype and confidence as the holiday season approaches. Additionally, with the cost of components, materials and suppliers rising in the wake of Covid-19, we may see more brands focusing on fewer, more targeted products as we move forward, tapping into very specific customer needs and across more relevant channels.

If that is the future of advertising, at least things won’t look too bleak for the planet.