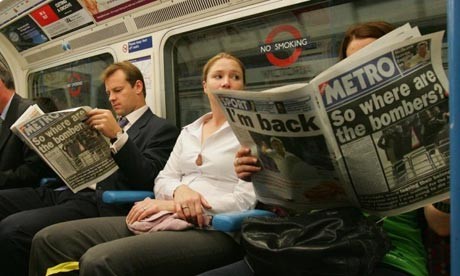 How much do you imagine a quarter page, black and white advertisement in the London edition of Metro (the free commuter newspaper) costs? A few hundred quid? A bit more? The answer is £6,636.
Perhaps I'm terribly naive or getting a bit old, but I find this remarkable. Six and a half grand buys you access to 744, 386 readers to whom you can display a 200mm high x 112mm box in mono, sharing the page with editorial and other advertisements over which you have no control. Want colour? That'll be 25% more.

Naturally, there can be no way of knowing how many of those quarter of a million readers will notice your advertisement, or even see it (not every copy is read cover to cover, far from it). What is certain, is that 24 hours after your message appears, it will be superseded by a new edition of the paper and a new raft of ads and your investment is over.

I only mention Metro as an example, this is the story across the print versions of almost every newspaper although the costs vary depending on the title (you should see how they rise for a national campaign). What I'm really emphasising is my belief the press advertising model is a busted flush. If you were to introduce it to a client as new concept today, their mixture of dismay and laughter would haunt your dreams.

Compare this substantial outlay with digital, pay-per-click advertising. If you're unaware of this method, it is simply a means of running advertisements on search engines and websites the difference being that you only pay when a user actively clicks on the ad and visits your website. This is the equivalent of placing your message in Metro, but only handing over a few pence for each person reading it. If they don't look and act, you pay nothing. What's more, if your pay-per-click campaign is with Google, you will be given a suite of tools to track the activity of 'clickers' and examine which messages are working, where the customer came from (both geographically and online), how they used your site and a mass of other valuable marketing data. You can even adjust your advertising as many times as you like. There is no charge for any of this. When measured against print campaigns it is like watching a horse and cart trotting behind a bullet train.

So why does this matter? Well, newspapers are in difficulty. Not 'we could do with a few more readers and touch more cash' difficulty, but a 'we may well vanish completely' difficulty. Established titles like The Evening Standard and Manchester Evening News are now given away in the hope of maintaining their circulation, and once there is no cover charge they are left with advertising as their sole revenue stream. Unfortunately, not only does the internet offer a more flexible and dynamic means of delivering the daily news, it also has the better advertising model.

Rather bravely, News International's papers have continued to charge for the print edition and now charge for access to their websites. This is the kind of stubbornness in which only those with extremely deep pockets can indulge and its profitability is far from assured. Meanwhile, The Sport papers have folded under the pressure and The Guardian has positioned itself as a digital entity with a paper attached. They give away their content online, so once again, they are faced with an advertising-only income strategy.  As you might expect, almost any newspaper you'd care to name is losing money faster than a chocolate radiator factory.

It is surely time to face facts. There isn't, and can't be, any future in the notion of flogging poor performing ad space in printed newspapers at eye-watering prices. Whether familiar newspapers build their own pay-per-click networks, invest in apps and mobile platforms, charge for content or devise entirely new, as yet unimagined business tactics remains to be seen. But the traditional 'column centimetres for cash' practice is as archaic and doomed as cassette tapes and any title failing to find an alternative will simply expire.

After all, if you had a £7k marketing budget, how would you spend it?