Facebook’s business model is in danger

Facebook made it quite clear that the company isn’t fine with Apple allowing users to opt out of personalised ad tracking with iOS 14. Of course, that shouldn’t come as a surprise to anybody.

Some context first: Apple has officially announced that an upcoming iOS 14 update will enable users to prevent apps from tracking navigation data, hence making it quite difficult to show personalised ads. This potentially comes as a hard blow to a number of advertisers, who were previously using the unique identifier on each iPhone and iPad device (called IDFA) to track the effectiveness of online campaigns.

However, with Apple being increasingly concerned with privacy issues since the Cambridge Analytica scandal, this is also an expected move from the Cupertino company. iOS and macOS have been introducing more and more ways to protect user privacy, from hiding email addresses to locking/restricting app access to photos and location services. I am certainly not surprised.

Just as I am not surprised that Twitter, Snapchat and a number of other platforms are perfectly fine with Apple’s move. Some like Google may be dying a little inside, but they also know that protecting user privacy is important – something that Facebook itself hasn’t been too capable of doing lately. But Google is keeping mostly silent. Facebook isn’t.

So what is the deal here?

The narrative of small businesses

The argument that seems to be at the fore of Facebook's statements from the past few days is that small businesses will be extremely hurt by this move made-in-Apple. Notably an advocate for small businesses and the oppressed, Facebook is using this narrative to try and compel Apple to review its decisions.

This is the same Facebook that has often revised its algorithms to support larger pages on the platform, cutting others out of the same share of visibility, under the pretence that “your friends are everything that matters on Facebook.” Except of course when your non-friends pay. Then it is absolutely fine for you to see their posts and ads.

If the entire platform were built around supporting small businesses and helping smaller brands, I’d be the first to believe that Facebook is trying to protect those with a smaller chance of success on social media. But it simply isn’t like that. Both Facebook and Instagram are platforms that base their revenue on targeted advertising and sponsored posts, and yes, very few of those in your feed will actually come from small businesses.

Mostly because, you guessed it, those businesses won’t always have the finances to sustain or justify a fully-fledged social campaign on Facebook. Big advertisers will always have the upper hand in that game. Meaning the algorithm simply cuts them out of the equation altogether. I haven’t seen an interesting or slightly different page climb the Facebook rankings since 2016. Those stuck at 3,000 likes tend to remain there, unless willing to spend a fortune in advertising. Is that the kind of business model Facebook is trying to protect?

Or, rather, is it more willing to protect its own? 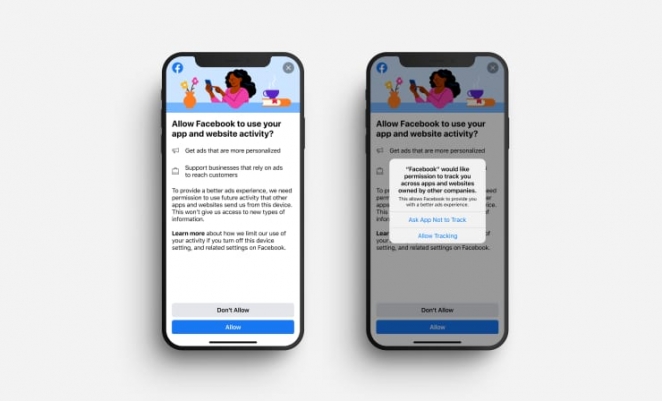 Facebook is testing prompts to appear before Apple's own screens.

Much different was the reaction of Twitter and Snapchat, who praised Apple’s choice. I can see why. Twitter especially seems to have understood the power of content creators on its platform, and it is slowly moving to a Patreon-like model to support them best, while still bringing in some revenue thanks to ads.

I doubt Twitter will get rid of targeted advertising altogether, but it is certainly a move in the right direction. Less product-selling and more meaningful experiences for users, at a time when we are all starting to feel the advertising fatigue from scrolling through our Instagram feeds.

I would have probably expected the Facebook argument from Twitter, perhaps. The tech giant’s actions from the past year, from protecting users from fake news to the introduction of a new, community-focused brand, speak for themselves. Twitter cares about the users on its platform, and everyone matters, big or small. To Facebook, users have always been one more opportunity to sell some advertising – and I doubt this changed as soon as Apple announced the new iOS 14 update.

Still, Facebook knows really well that Apple isn’t going to change that policy. What’s going on there, then?

It’s easy to see this statement from Facebook as somewhat of a marketing move. Just like Epic Games knew really well that Apple would have never allowed them to reintroduce Fortnite into the App Store, not without fixing that in-app purchase workaround. The difference is that Epic Games had planned an entire little campaign around #FreeFortnite, which gave them quite a lot of exposure. Facebook here is left desperately scrambling for attention, almost abusing the same kind of grassroots-guardian narrative.

Facebook’s popularity has been in decline since the Cambridge Analytica scandal. Numerous users have left the platform since then, and though it is still one of the biggest social platforms on the planet, its influence isn’t nearly as stellar as it used to be.

I can’t help but feel that Facebook has been trying to cling onto the little pieces of identity it has left, before leaving room to more established platforms. This is clearly an attempt to rebuild a brand, but everything surrounding it – from Facebook testing its own prompts to fight Apple’s to the inevitable urge to look at the company’s recent past – feels random, disjointed, desperate and certainly not genuine at all.

This is clearly an attempt to rebuild a brand, but everything about it feels random, disjointed and somewhat desperate.

In a way, this whole story is telling the world that Facebook doesn’t care about its users’ privacy as much as other platforms – or that it doesn’t care enough to revise its own business model to ensure a better, safer future for the Internet. And it prompts questions about whether Facebook has learned from the Cambridge Analytica scandal at all.

Perhaps alluding to Zuckerberg’s statement, Tim Cook said: “If a business is built on misleading users, on data exploitation, on choices that are no choices at all, it does not deserve our praise. It deserves reform.”

If you wish to receive more inspiring content like this straight in your inbox, click here to create your very own Creativepool profile for free! Header image: Alexander Shatov on Unsplash.