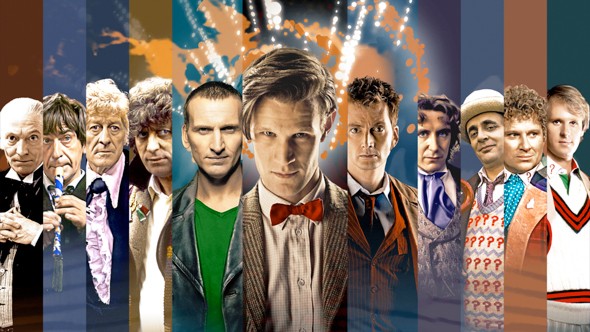 Dr Who theme standing the test of time(lords)...

I can name three things which sent me running for cover behind the sofa when I was a child. The film Jaws especially with the entry of John Williams' iconic two-note blood-chilling theme; another Jaws, but this time from James Bond, bearing his silver dentures at Roger Moore; and the Dr Who theme tune. As a five-year-old, I found it just terrifying. In essence, the basis of the theme has changed very little since it was written in 1963 by Ron Grainer. Today, the theme is a bit more triumphant and exciting than frightening but it can still send a tingle down my spine. It certainly did when I stood on the stage at the Royal Albert Hall this weekend to sing in two sold-out performances of the Dr Who Prom with the London Philharmonic Choir (and yes, featuring Matt Smith and Karen Gillan). But anyway, name-dropping aside... What is it that makes the Dr Who theme stand the test of time?

As with a lot of successful things, it's the simplicity of it, in a way (although in terms of sound manipulation and construction, it wasn't simplistic at all, if you watch the video of how the 1980s theme was created by clicking on the YouTube video below). But you only need to hear three notes (the ooo-eee-ooooo bit) and you know it's Doctor Who. Back in my early childhood, Tom Baker was the mop-headed Doctor with starey eyes and those starey eyes did add a bit of fear for me, I have to say, when they appeared over the credits. But the main fear factor was conjured up by the theme composed by Ron Grainer, Delia Derbyshire and the BBC Radiophonic Workshop â€“ which sadly closed its doors back in 1998. The bare bones of the theme tune has hardly changed in 47 years but these days, of course, technology makes it a bit easier to create interesting synthetic effects.

A bit ironic, therefore, that the theme has moved away from electronics and the musique concrete-influenced use of oscillators with the manipulation of everyday sounds like banging drainpipes and rolling ashtrays long table tops to become a lot more filmic and symphonic; more traditional, in a way. Do you know how they made the noise for the Tardis? Someone scraped their house key up and down a piano string and then that sound was stretched and slowed down. Not exactly rocket science (well, Tardis science) and yet that sound hasn't changed in the entire history of the programme, to my knowledge. But still, the new incantation of the theme, reworked by Murray Gold and orchestrated by Ben Foster, carries with it all the history, nostalgia and wonder of my childhood.

If you want to hear all the Dr Who themes and how they've been reworked over the years, click on the YouTube video here:

I can think of a handful of other theme tunes which may have been reworked but which have essentially not changed since their first outing. Coronation Street is the most evocative musical representation imaginable of whippet-stroking cloth-cappedness t'north - Eric Spear conjuring up both warmth and melancholy at the same time. Whether that image is still as relevant today as it was is another matter, but certainly when it first hit our screens back in 1960, the cornet-led colliery band with clarinet and double bass was a perfect fit. Only when Corrie started being shown in HD in May of this year was the theme re-recorded. EastEnders, by TV theme legend Simon May, is probably as famous for the dm, dm...dm dm d-d-d-d-d as for the cockney whistley theme itself but again, if it ain't broke [Ricky!], don't fix it. And they haven't, since 1984.

Emmerdale has had more of a makeover both in terms of music and even series name than some of the others. Formerly Emmerdale Farm, the fairly recent update of the theme with everything from the horns to the cymbal roll now evokes more of a feeling of majestic, rolling British countryside than poky farm shed and a rather melancholy solo oboe.

So what other iconic TV themes do you like? What brings you crashing back into your childhood when you hear the first few bars?

Of all the projects I’ve been involved with since my career in design and branding kicked off some twenty years ago, there are few I feel as fondly towards as the Studiocanal cinema ident. I remember the day we received the brief; the rush of...

How neuroscience can save Christmas for brands

Yes, it's September, and you're not the only one wondering where the year went right now. Excuse the 'C' word, but Christmas is around the corner, at least for consumers. Brands will already have most of their planning ready for this year, and they...

The industry’s mental health is in bad shape, but there's hope

With the COVID-19 outbreak showing no signs of giving up, more and more professionals in the creative industry have been struggling with mental health, with 67% of people feeling now more anxious than ever, according to Anxiety UK. The mental health...