During the time it took to write this article I have gone to get some garlic bread out of the oven, eaten the garlic bread, let the cat in, chatted to my flatmate twice, opened my advent calendar, located the knife sharpener in the kitchen, boiled the kettle, answered a call from my neighbour, removed the cat from my desk, made a cup of tea, checked the time on my phone, replied to a thread on Facebook, eaten a Clementine and then eaten another Clementine.

Ironic then that today's blog is all about getting distracted in the workplace.

Luckily I work for myself now so I don't have to curb or conceal my fickle and unreliable attention span from a boss. Multi-tasking works for me to an extent, as does a couple of quiet hours of intense concentration rather than a whole day spent meandering around a task. I've had a few office jobs and the lack of variety and real-life stimulation usually lead me to have a post-lunch nap on the keyboard every afternoon followed by hours of mind-numbing boredom and looking at pictures of friends of a friends cousin's holidays interspersed with catching up on Hollyoaks.

Worker concentration is a big problem in the workplace as an article on the Wall Street Journal's website explored this week. The average office worker gets interrupted either digitally or physically every three minutes and it usually takes 23 minutes to get back to the task at hand. That's a lot of wasted working hours for companies but it would seem that multi-screened desks in amongst communal offices with boxes and beeps and notifications popping up every few seconds are only serving to make workers even more distracted which in turn makes them pretty stressed to boot. 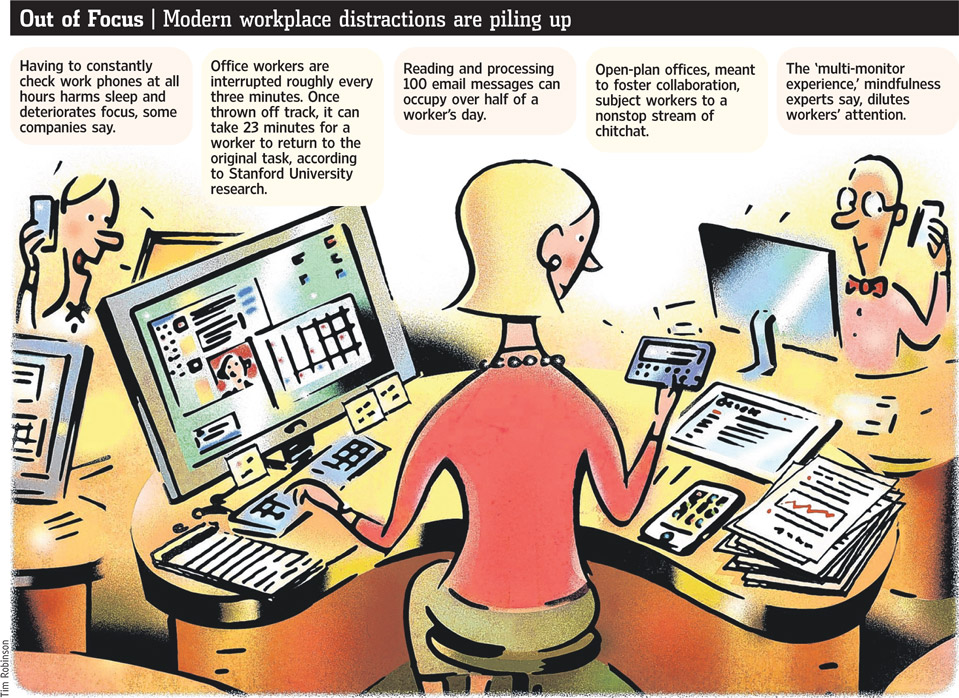 A constant flow of meetings and internal emails during a working day means that most of the real work gets done early in the morning or late in the evening. Some companies are now threatening to limit internal emails and one has even taken the steps necessary to ban them altogether. Jamey Jacobs of Abbott Laboratories makes his workers use the phone for urgent matters and emails for matters which can wait, which gives them a sense of prioritisation as well as lessening the time spent juggling their inboxes. Ms Robertson of Ebay has banned all devices from the meeting room which surely is an obvious thing to do just as a teacher would in class.

Workers at Intel have four weekly hours of "think time" when workers can focus on problems and aren't expected to answer emails or attend meetings. One employee has developed a patent application during this time.

At Atos - an IT services company which employs 74.000 staff - internal emails have been banned altogether and communication takes place via an internal social network.

It would seem that life is trying to dilute our attention more and more by putting everything in the same place. Just look at everything you can do on your phone, or on your iCloud, or on your desktop. All this is supposed to make us more efficient human beings and save us time, but the opposite is starting to occur now we are at saturation point. The greatest thinkers of our time didn't achieve the world's greatest breakthroughs in science or literature by trying to write their shopping list and updating their status at the same time. We need space and stillness and solitude and only then will we do our very best.