The London-based Soho House brand, which specialises in offering refined, luxury social facilities and accommodation, recently unveiled its latest venue in the famous windy city of Chicago. The 40-room boutique hotel and social club has been under construction for 14 months and was finally opened on Monday on the city's Restaurant Row in the West Loop, mere spitting distance from the famous Green Street Smoked Meats Restaurant and Randolph Street Markets. It's to be the first hotel on Restaurant row and the company's largest property to date at 108,000 square feet. Vicky Charles, the brand's design director, believes the project took so long to complete because of the city's infamously bad weather. She said that because it snows a lot the building materials have to last, they have “Black-and-white reclaimed stone tiles on the roof” and they needed to make sure they didn't “Crack and pop off in the cold." She said, however, that nobody at Soho House is a design purist, they simply decorate with things they love and that it doesn't matter “Whether it’s this era or that era,” only that it works and it “Feels glamorous.” 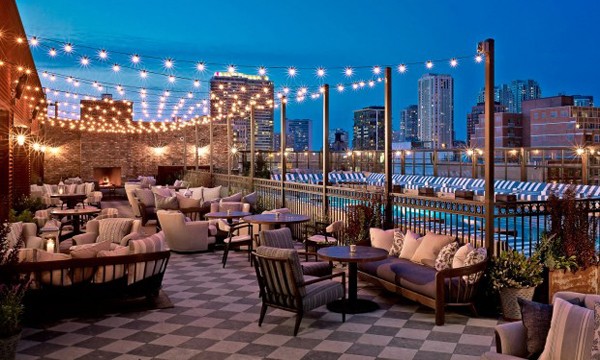 The rooftop bar and pool area

Nick Jones, the founder of Soho House, said the series of events that led to the former belting factory were “A bit fortuitous.” He toured the (then) vacant property at 113-125 North Green Street three years ago and was so taken with the sweeping views of the Chicago skyline that he knew in an instant it was going to be the new location for his next Soho House hotel. But of course, it's not just a hotel, it's also a members only social club for “Creatives,” who (for a fee of just a shade under 2 grand a year) can enjoy the venues state-of-the-art fitness club and studios, gorgeous rooftop pool area (with the view that sold Jones on the property) and a sprawling fifth floor nightclub. With a DJ booth, grand piano, fireplace and ping-pong tables.

As well as being a fully functioning hotel and social club, the new Soho House also has two floors open to the public. In the sprawling lobby area they can order drinks and snacks and admire the art on display (including pieces by Damien Hirst). The Allis, meanwhile is a boutique lounge and cafe named for the family who owned the site in its industrial days, and there are also two elevated restaurants called Pizza East and Chicken Shop, as well as the Cowshed spa, which is the first such spa in a Soho House venue open to nonmembers. Hotel guests, meanwhile can enjoy a room for the night for $240, rooms that Jones says are each “Individual” and generous in their amenities (free Wi-Fi, and bathrooms stocked with everything from toothpaste to condoms). He says the idea behind the rooms is that “When you stay here, you’ll feel like you are staying at someone’s house.” 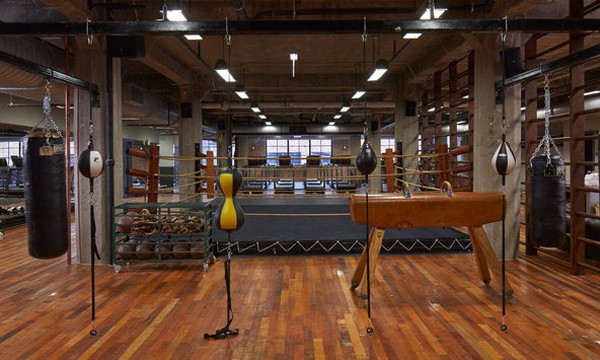 The brand, which also has American locations in New York, Miami and Hollywood, has also decided to let their latest venture pay tribute to the city's pugilistic history by installing a boxing ring on site. The custom-built ring has been put together completely by local companies, the respected tanners at the Horween Leather Company taking care of building the ring itself and a design courtesy of legendary Chicago boxer Rick Fornuto. Fornuto took Charles to numerous old-school boxing gyms in the area for inspiration, gyms in which the 1971 Golden Gloves winner still trains amateur boxers. He will also work with the venue to build up a boxing program and referred matches for the club's members. Jones admits that he hasn't put on a pair of boxing gloves since he was a child, but he does love the sport, and says there is a growing interest in it (“Only a month ago, a boxing match sold out Wembley Stadium”) that they hope to take advantage of at the new venue.

Benjamin Hiorns is a freelance writer and musician who will probably never be able to afford a Soho House membership. But a man can dream.

Those looking to get into Soho House, drop me a line at myakrasia@gmail.com