Behind the Idea: Standing out with courage in a sea of festive frivolity

With the festive season in full swing (nine days and counting), Toyota debuted its 2019 holiday spot last week as part of an ambitious and heartfelt campaign featuring genuine military service members returning home to their families for Christmas. “Yellow Paper” shares a familiar story of service members returning home for Christmas after a military deployment. The group is welcomed at the airport with a special heartfelt greeting (the recognisable yellow ribbon) displayed in the terminal by excited family and travellers, bringing everyone together.

It’s a decidedly emotional concept that goes right for the heartstrings but does so without coming across as trite or sappy. It’s a delicate balance to pull off and it’s one that Saatchi & Saatchi Group Creative Director Leo Circo was well aware could have backfired without the right creative direction. I caught up with Leo to quiz him about the creative thought processes and messaging behind the idea.

Our assignment was to create a spot that shows people celebrating the spirit of the season together. Supporting the troops is something Toyota is very passionate about. Demonstrating our support for our servicemen and women, and highlighting the holiday season as a time for family and friends to come together, became our ultimate objective.

Homecoming surprises of US service members and their families and friends are great examples of a message that brings people together and one that we are honoured to share. In the initial brainstorming phase, we also considered other themes like highlighting everyday heroes and first responders, who play such important roles in our society. However, in the end, we decided on a direction that we feel really speaks not only to showing support for the military but to the spirit of the season.

The “Yellow Paper” concept was something that resonated with us immediately. One of the filters we screen work through is asking ourselves how realistic and believable the concept is. Could it happen in real life? Does it move me? And is the reveal a surprise that emotionally pulls at your heartstrings? “Yellow Paper” passed all the filters the first time we heard the idea. It is, for the most part, the same idea that was presented in its original concept. So often ideas change along the way, however, this one remained relatively unchanged because of its sheer simplicity. 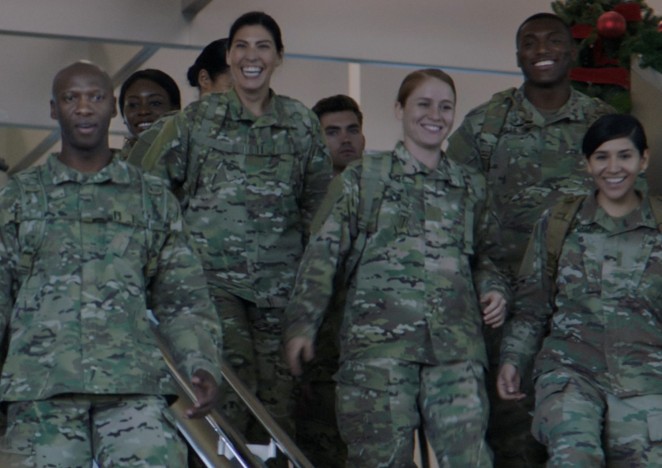 We worked with director Sean Meehan and his production company, Arts & Sciences. In short, it was an amazing experience. From the very beginning, Sean saw this idea the very same way we did, which is so important. Being on the same page creatively can make or break an idea. Collectively the team wanted to portray a strong mom who holds her family together while her husband is deployed. It’s a team effort on behalf of both parents doing what they need to do to raise a family while serving the country. On the set, the biggest challenge we overcame was that the snow scenes were shot in Los Angeles and Ontario, California when the weather was 96 degrees or hotter. Sean and his team, along with the Framestore team, made it all come to life through special effects and practical snow placement, which made it all look like it was cold enough to snow. Amazing.

We take authenticity and relatability very seriously. It’s important for us to portray the military theme in a very authentic way. All of our on-camera principal actors were soldiers who have served or are currently serving in the military. We also have several military veterans here at Saatchi & Saatchi and Toyota, who provided thoughtful input. Additionally, we consulted with a veteran during the production, who was invaluable in conveying how it really feels to be an active-duty service member returning home from an overseas deployment.

After Thanksgiving, it’s Black Friday, the beginning of the shopping season. Everyone is screaming deals. To stand out in this landscape it makes sense to do something that is less expected and more meaningful. 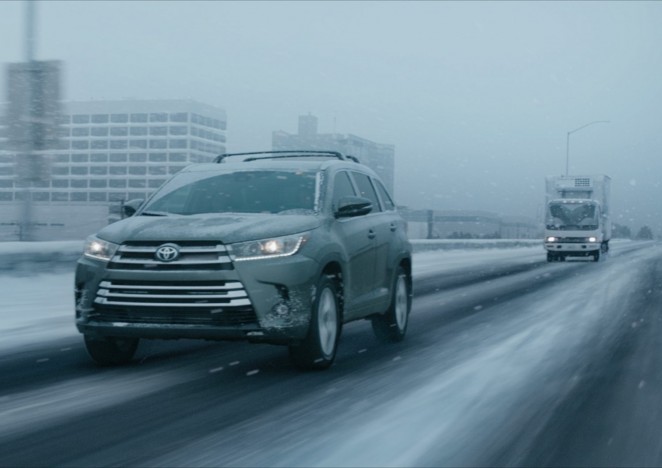 It is very satisfying. But what gives us the most satisfaction is that this idea was conceived by such a young creative team. To see them grow and learn so much from a large and complicated shoot like this one is truly gratifying. Campaigns like this also help incite camaraderie and inspiration among Toyota, the dealers, Saatchi and beyond. It’s something all stakeholders can rally around. For the viewers we hope they feel a deeper connection to Toyota and see the values the brand really stands for. We hope the spot conveys a sense of joy and togetherness for the holidays.