Behind the Idea: Grey unleashes the Hunger Hammer on hungry gamers

Last week, Pringles unveiled a rather unique gaming headset that doubles as an automatic Pringles dispenser. Whilst it might sound on the surface like some form of particularly creative torture, this bizarre invention was actually dreamt up by Grey New York as a means bridging the worlds of Pringles and Gears of War.

But where do hyper-violent post-apocalyptic warfare and curved potato-based snacks find common ground, you might ask? In their addictive nature, of course. This was the rich seam mined by the Grey team as they strove to find a way to promote Pringle’s partnership with the new Gears 5 game. They reached out to several top gaming influencers and asked them to beta-test the treat dispensing headset whilst streaming Gears 5 gameplay to their followers. The idea was to tap into the increasing connection the Pringles brand has been cultivating with the eSports and gaming community in recent years with a tongue-in-cheek “Hunger Hammer” concept that rewards the influencers with tasty treats as they score kills in-game. 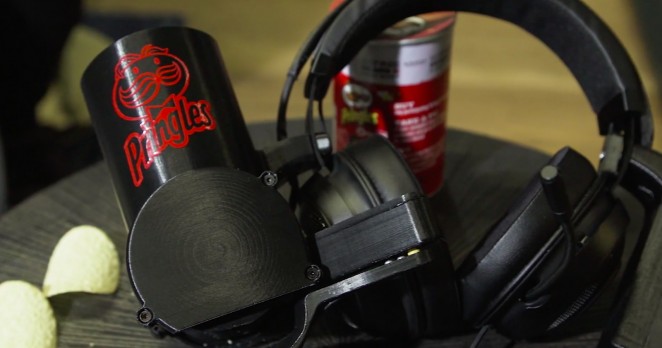 The Grey team struck upon the idea when they were discussing how best to promote the brand partnership. They wanted to do something a little more special than a typical on-pack promotion that would speak directly to the core audience - gamers. They explain: “Research and data showed us that a high percentage of gamers prefer not to eat while they game because it gets grease on their controllers and can be an interruption. This, of course, posed an immediate challenge for a snack brand like Pringles, trying to get into the gaming space. Our brainstorms began with this information and challenge as a starting point.”

They reasoned that, since all gamers wear headsets while they play, the logical move was to create a custom headset that feeds gamers Pringles while they play. The team continues: “This idea felt like the right choice because Pringles is not a brand that likes to take itself seriously. Within that, we are in the process of establishing a new tone for the brand. A tone in which everything that Pringles does should have a sense of genius to it, but genius in aide of pointless fun, not serious issues. With those parameters in place, the moment this idea arrived we knew it was the right fit.”

Six months after conception, after working out the logistics of the device and getting the right influencers involved (Criken, DexBonus, and Strippin), they were good to go. The production process was not without its challenges, however, with the team learning early on that actually building physical prototypes is not exactly easy. They explain: “We do not envy Elon Musk. We went through multiple rounds of iteration and improvement on the headset and its delivery mechanisms. Pringles are designed to be crispy and crunchy, which is great for when you eat them, but not so great when you’re trying to deliver them through a mechanical device into someone’s mouth. Let’s just say mechanics aren’t sensitive and potato crisps are.”

They managed to work out the kinks though and settled on a device that delivered the chips into gamers gobs with around a 70% accuracy. Good enough for an advertising gimmick, but probably beyond the mass production stage. The message of the campaign was that Pringles is a snack brand that takes their sport seriously, but in a fun, humorous way and aimed to promote the fact that Pringles will be investing significantly in gaming over the next few years in an “authentic, but never in an overly earnest way.”

It’s an elaborate joke, but it’s based on a very real gaming insight with a tongue-in-cheek delivery that should help it stand out in an overly earnest space. The Grey team also feel their commitment will help the campaign land. They add: “We believe how far we took the joke and how elaborate we made it and how we leaned all the way into it will make it cut through. Often when brands go into the gaming space, they do so half-heartedly. We went the other way and went all in and we hope people appreciate that.”

So what does the team hope the brand can achieve from this bold stunt? They hope that it can help Pringles build momentum in the gaming sector and get more gamers engaged with the brand. They are already finding themselves down away by the coverage the campaign has received. Indeed, top tech publications like Engadget, as well as huge publications like Mashable and big gamer publications like IGN all picked up the story when it first broke. It also gained a lot of traction on ‘meme’ websites like Imgur. What’s the biggest achievement for the team though?

“Most gratifyingly,” they finish “the campaign was reposted on multiple SubReddits, getting hundreds of thousands of views and thousands of upvotes. All of these are places that Pringle's campaigns have never shown up before and will begin to help us gain traction in new spaces and markets we haven’t shown up in before.” Reddit is often seen as the one part of the internet that’s unobtainable for advertisers so we can see why they are over the moon. Still, we’re not sure we’d fancy donning a Hunger Hammer ourselves. Unless they could sort out that 70% accuracy, of course.

Reading this interview with 3D illustrator Andrzej Kuziola and looking at his stunning works of art, we would almost be tempted to steer clear of any artist coming from a medical background. Andrzej's imagination can be triggered by anything - be it...

There’s not enough time. We don’t have enough budget. There’s no way I’d be able to do that. If you’re a creative person then you’ll know that limitations are everywhere. Sometimes the boundaries are illusory...

Kindness matters. A simple act of kindness can boost both your mental health and the one of others, creating community and demonstrating support to those around you. Kindness is also the theme of this year's Mental Health Awareness Week, hosted by...