Behind the Idea: AI-powered fun from Avantgarde's Motivator

Aside from post-apocalyptic thoughts related to Skynet and the Matrix, the rise of AI anticipates a future of big data, digital and progress. Countless are the already available uses of AI, from the most primordial forms in game programming to advanced machine learning and behavioural analysis.

So when Jason Anderson, digital director at Avantgarde, approached us saying that he had developed a "random generator of motivational sport phrases entirely run by an AI", we were obviously a bit surprised. And yet, even the silliest project can hide a creative spirit, and The Motivator does just that: showing how AI can be used in a creative, tangible and fun manner.

Besides, is it a coincidence that we could refer to Jason as 'Mr. Anderson'? We think not.

The brief was to quickly and effectively show how AI could be used in a visibly creative manner. There is so much AI around us already, especially at the moment, but the majority of it is invisible to us – in backend systems, computer vision systems, big data analysis and the like. We wanted to make something that was more instantly tangible in a creative manner and which had a bit of fun about it too.

Starting with the knowledge that there were many AI systems that we could plug into, our development team quickly coalesced around the idea. There were no real stumbling blocks – working with super-new and exciting technology often has the effect of allowing new ideas to bubble to the surface very quickly.

We needed something that users could quickly access – so it needed to be on a website, optimised for mobile. We also needed the interaction to be swift and easy – so, no in-depth questions to be answered, no strange terminology to understand. And it had to be surprising and entertaining, whilst also hiding away the AI mechanics. In a way, the AI aspect almost had to be invisible. 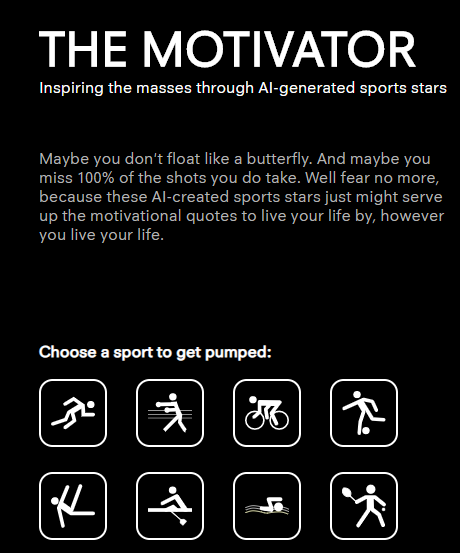 The largest part of the process was in setting up and training the AI engine in order for it to generate sports quotes. We initially gathered thousands of real human-generated sports quotes online, as text, using a custom-built crawler. This was our initial data set to train the AI on.

This dataset was then analysed through a custom-built recurrent neural network (RNN) in Google Colaboratory to train the system and produce many potential quotes. We also experimented with AI-created datasets with GPT-2 in Colaboratory, Talk To Transformer and Text Synth.

In a way the A.I. aspect had to be invisible

In the end, thousands of quotes were created, and the list was finally curated by a human to ensure suitability.

We used a similar technique, again with a RNN, to craft the names of the athletes.

As in all AI-generated content programmes, the biggest challenge is to get output that actually makes sense to humans. That’s where solid training of the networks and fine-tuning by humans comes into play.

That AI can be effective in creative tasks as well as in pure data or behind-the-scenes work. There’s an awful lot of research happening into how AI can be used in more creative ways – such as generating paintings, photographs or even written stories. They’re not going to replace humans in the short term, but they are already becoming useful as tools to “kick start” a programme that is then completed by real people. We also wanted to have a bit of fun and produce some motivational quotes that somehow made sense even when they didn’t – just like some of the best motivational quotes already out there.

The combination of the product’s simplicity and fun alongside the advanced technology that sits under the surface. This is part of what Avantgarde always strive for – taking relevant technology and wrapping it in a human-scale story, making the technology invisible yet still highly effective.

Everything is created by the AI engines – the names, the quotes, the faces. 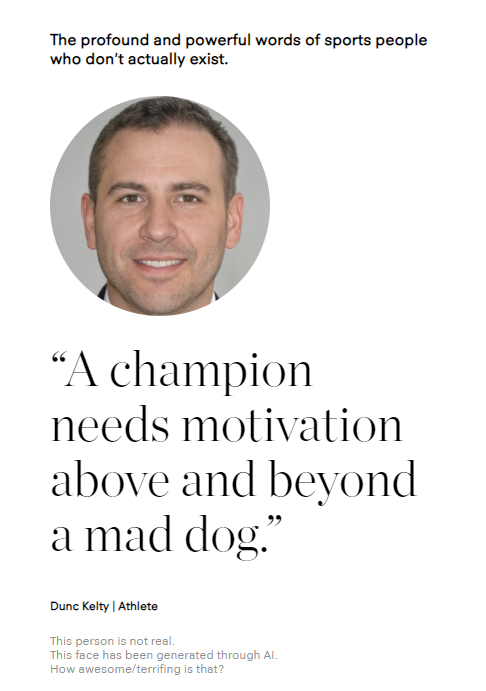 Less than two weeks including concept, visual design, build of the website, setting up and training the AI and end-to-end testing.

As with any project, of any size, it’s always great to see the work “out in the wild” and see the comments from users. With this project, because of its very nature, it’s even more interesting to see how people react to learning that everything on the site is AI generated.