A roundup of the most important news of the week in the advertising awards world.

After closing the PanelPicker public vote, SXSW has selected the sessions for the 2017 edition of the festival.

More than 750 sessions have been announced featuring key leaders and top trends.

It is your occasion to hear advertising agencies such as TBWA (Advertising for Good, What Is It Good For?), Stinkdigital (Music as Client) or The Richards Group (Our Skip Button Love Affair).

For 15 years, the awards competition created in 2001 to recognize future stars of the industry has awarded young creatives under 30 years old, some that even went to become greats.

For its final year, the Young Guns Awards gave its Grand Prix to the hilarious campaign “Solar Stealers” for Origin Energy by Clemenger BBDO Melbourne (Australia). 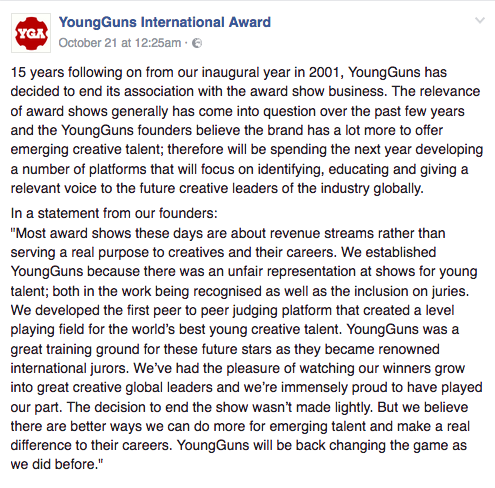 Big Winners of the week

Setting the benchmark for creative excellence worldwide, the definitive rankings and analysis from the annual Cannes Lions Global Creativity Report have been announced.

The Global Creativity Report showcases the award-winning work, highlights the world’s most creative countries and cities, agencies and networks, and identifies the trends and themes at the heart of branded communications.

Quote of the week

If you want innovation: hire people who don’t agree with you, don’t look like you … keep looking until you find them!