Such is the power of Apple’s 1984. You see as little as a string of 4 numbers (or more precisely, a date), you see a still frame from the original ad, and you instantly know we are talking about a game-changer in the history of advertising.

Apple’s 1984 clearly draws inspiration from George Orwell’s works, turning around his narrative to attack IBM and its monopoly in the tech industry of the time. There have been many commentators talking about the ad and many people questioning Apple’s current identity when put against the original 1984 – but the company’s essence to protect privacy and freedom has remained. And thanks to that, something as simple as a woman throwing a hammer on a screen was able to leave an everlasting impact on the future of the industry.

As a dystopian writer myself and a huge fan of Orwell’s works, I couldn’t not love this ad. For those missing a bit of background on George Orwell, he was an English writer and a father of modern English literature. His works, including but not limited to Animal Farm and 1984, would focus on painting a rather cynical picture of society and its mechanisms, as well as fanaticism and leadership. Orwell would go on to define not only some pillars of English modern prose and style, but also the speculative/dystopian fiction genre altogether.

One key figure from the 1984 novel (which Orwell started writing in 1948 – essentially swapping the last two digits of the year to generate the title) is Big Brother. Big Brother dominates the novel as an undertone, as the “watcher and leader of the country” who keeps an eye on everything through strict surveillance and a totalitarian regime. From memory, I don’t believe the protagonist ever meets Big Brother – but nevertheless, the impact of this evanescent figure is still felt today in pop culture and through the most gripping sci-fi works out there.

So it was just natural that Apple would opt for the Big Brother to tell a story about freedom, non-conformity and innovation. This time, however, the year was 1983.

On 12 December 1980, Apple went public selling 4.6 million shares at $22 per share and generating over $100 million, more capital than any IPO (Initial Public Offering) since Ford in 1956. In the following years, Apple finished work on the Macintosh, the first personal computer to be sold without a programming language, and with a graphical user interface (GUI) as chosen by Steve Jobs. The company needed something big. It needed to make a lot of noise to announce the launch of this milestone in hardware and software. Going against IBM, which was operating in an almost total monopoly of the market at the time, seemed like the best move to Jobs and team. 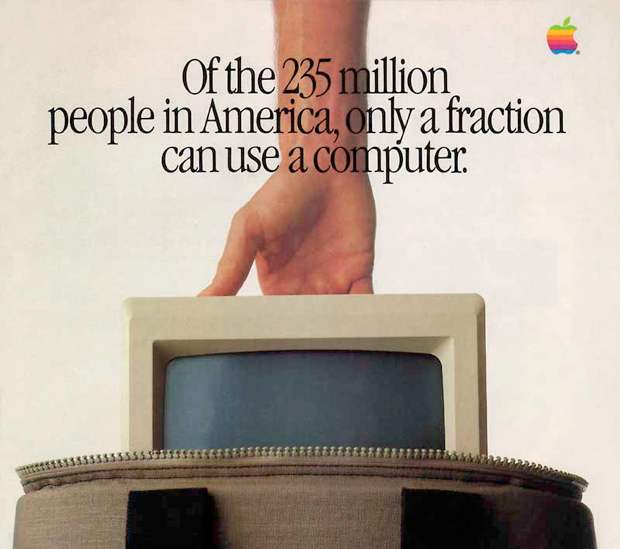 In 1983, during a keynote showing a preview of the ad, Steve Jobs read the following:

“[…] It is now 1984. It appears IBM wants it all. Apple is perceived to be the only hope to offer IBM a run for its money. Dealers initially welcoming IBM with open arms now fear an IBM dominated and controlled future. They are increasingly turning back to Apple as the only force that can ensure their future freedom. IBM wants it all and is aiming its guns on its last obstacle to industry control: Apple. Will Big Blue dominate the entire computer industry? The entire information age? Was George Orwell right about 1984?"

Note the mention of Big Blue as a clear reference to Big Brother. The cards were set. It was time to show the world the power of the Apple difference.

The commercial was created by Chiat/Day, an advertising agency from Venice in California. It was conceived by Steve Hayden, Brent Thomas and Lee Clow, and produced by Fairbanks Films. But the one exceptional thing that contributed to 1984’s success was that Ridley Scott was hired to direct it.

It was said that the Alien and Blade Runner director filmed the commercial in England for about $370,000, but other sources (writer Ted Friedman) later stated that the commercial actually had a production budget closer to the million. Hard to know who was right, but Ridley Scott himself admitted that he accepted brutal budget constraints just because he believed in the ad’s concept.

When Steve Jobs and John Sculley saw the final product, they were so enthusiastic they purchased one and a half minutes of ad time for the Super Bowl, historically one of the most expensive ad spaces in the entire United States in any given year.

Yet, the Apple Board of Directors actually disliked the film. In truth, the entire board hated the commercial and Jobs’ team had to ignore their views completely in order to get the spot on TV. Steve Jobs and Steve Wozniak believed in it enough that they offered to split the cost of the spot. In the end, this was unnecessary, and the Apple team settled for a 30-minute ad space during the Super Bowl. 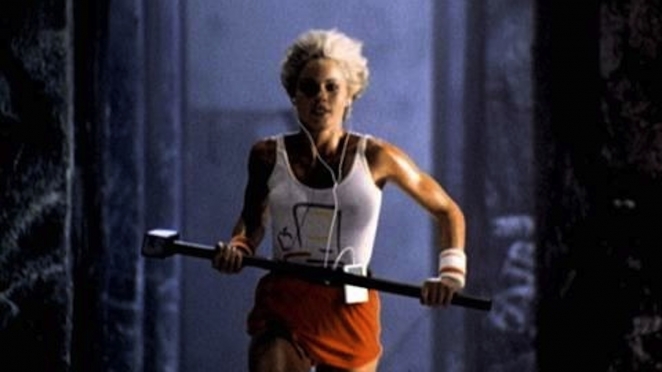 On 31st December, 1983, in the last possible free ad space of the year, 1984 aired during the Super Bowl. The commercial opened with a dystopian setting in blue and gray tones to mimic IBM, and lines of people marching through long tunnels while monitored by surveillance. Then, a nameless runner portrayed by Anya Major appeared on screen, wearing a white tank top with a stylised drawing of the Apple Macintosh, and carrying a sledgehammer in her hands.

The woman is colourful, lively, a human in a room full of lifeless “drones.” She is being chased by guards, presumably from the Thought Police, protected by riot gear as they attempt to catch her before reaching the “Big Blue” – a figure portrayed by David Graham and giving a speech to the drones.

As the Big Blue announces the iconic words that will make the history of advertising “We shall prevail!”, the nameless runner hurls the hammer towards the screen, shattering it and leaving the audience speechless. Then, a simple sentence on screen:

Fade to black. Apple’s rainbow logo appears. History is made.

About $3.5 million worth of Macintosh computers were sold just after the advertisement ran. Despite the board of directors hating the ad, it was an instant and incredible success. Because it aired just before midnight, it qualified for the 1984 Clio Awards, which it won. It also won a Grand Prix at the 31st Cannes Lions International Advertising Festival and several other accolades from all across the industry. In 2007, the ad has been defined the best Super Bowl spot in the game’s 40-year history.

The spot entered pop culture and it was referenced countless times in the industry and beyond – such as when Valve used it to announce the release of Half-Life 2 on Mac OS X. The most recent case however is offered by Epic Games and its lawsuit against Apple.

On August 13, 2020, Apple removed Fortnite from the App Store following the introduction of a new patch which circumvented Apple’s policies for in-app purchase. Epic filed a lawsuit against Apple, and in no time came out with a parody of the 1984 app, questioning Apple’s original identity and replacing the Big Blue with a talking Apple. One of Fortnite’s characters acted as the heroine, throwing a sledgehammer at the talking apple, in an effort to question Apple’s own identity and to claim they themselves have now become the same thing they fought in 1984.

Apple’s spot came just at the right time. You can probably say the same thing about many successful ads from the industry. Even DDB’s ‘Think Small’ ad for Volkswagen was able to intercept just the perfect segment of consumers at just the right time to launch a brand into the stratosphere.

Consumers were ready for the next step in the era of personal computers. The learning curve to start using a new machine was too steep, and Apple’s innovative approach to GUI is what made the difference between a terrible flop and an astounding success. But it would be false to assume that the ad did not play its part. People bought into the narrative of freedom, non-conformism and innovation heralded by the 1984 ad, and were more than willing to give Apple a chance because of that.

That is one ad that makes history.

Apple’s 1984 is now widely considered a watershed event in the history of advertising. The Clio Awards added it to their Hall of Fame in 1995.

We heard a great deal of talks about mental health, work-life balance and authenticity during the past year, and the push to remote work is certain to leave a long-lasting mark in the workforce - creative industry or otherwise. What was once...

World War II is over. The western world is benefitting from an economic boom that is bound to last quite some years, and the effects of which we will still cherish and love many years ahead. Of the numerous societal innovations from those years, the...