'Action Painting' gets us in a mess. It's not just toddlers who get a kick out of using their bodies as paintbrushes, it's a visceral and provocative discipline which has intrigued the art world since the 1950's when it first burst onto the scene via Jackson Pollock's drip paintings.

The documentation of the process, captured by photographer Hans Namuth, has become as important as the finished works themselves.

In 1952 art critic Harold Rosenberg wrote an article in which he coined the phrase 'Action Painting' entitled 'The American Action Painters'.Â  He wrote "At a certain moment the canvas began to appear to one American painter after another as an arena in which to act. â€¦ What was to go on canvas was not a picture but an event."

In Japan in 1954, a group of young artists known as the 'Gutai Movement of Concrete Art' saw one of their members, Shozo Shimamoto, create a number of paintings by smashing bottles of paint on the canvas, or firing small, handmade, paint-filled cannon at the paper.

Kazuo Shiraga staged 'Challenging Mud' in 1955, using her whole body to roll and wrestle a pile of mud into sculptural forms.

As with Pollock, this was more about the documentation than the finished piece.

In New York in 1960, Jim Dean performed 'The Smiling Workman' in which he drank from paint pots with a black smile painted on a red face, then poured paint over the head and jumped throug

Painter Yves Klein spent most of his time creating paintings using one singular colour, mostly in his own 'International Klein Blue'. In 1960 he created a series of works under the title of the 'New Anthropometric Period' in which he used naked female models to dip themselves in International Klein Blue and print their bodies on pieces of paper. This process was accompanied by a small orchestra playing his 'Monotone Symphony' i.e. just using one note.

In France in 1962, Nike de Saint Phalle created 'Shooting Paintings' where she shot paint-filled balloons at the canvas... 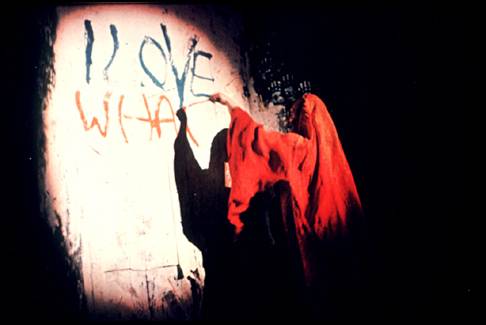 sh to her knickers and squatting on a large sheet of paper. This was a part-protest to the previously male-dominated discipline of Action Painting.

In 1993 in London, Janine Antoni seconded this with 'Loving Care' by soaking her hair in dye and dragging it around the floor like a mop.

The idea of painting as a performance is a fun, primal and deeply satisfying pursuit which removes the need to have skill with a paintbrush, leaving only the very basic elements of man and paint behind, it draws connections with cavemen painting on the wall with their fingers and of playschool art lessons, why not give it a go yourself? It would be highly liberating.