There are few things more cringe-worthy than politicians trying to be any of the following: hip, funny, down with da yoof, normal, John Travolta. I had to add number five because I'm still haunted by images of John "Two Jags" Prescott bopping away at some bash or other all too seriously. There he was, going all Strictly Come Punchy, and chewing away like Travolta in Saturday Night Fever, completely oblivious to the fact that he looked utterly ridiculous. Remember that YouTube clip of the cat clinging on to the ceiling fan? That was less funny than Jazzercise Prescott.

Now we're entering the midst of Christmas goodwill and silliness (having already had pre-Christmas utterly bonkers madness with Black Friday), and the time of year where we dust off our address books and decide who's worth a Christmas card. And then there are the sub-categories, of course: who's worth the charity Christmas cards I bought five years ago and am still trying to get rid of, and who's worth the classy M&S cards I bought this year because I'm doing slightly better. Oh, it's a minefield.

Some people, of course, don't have that luxury. Well, by “luxury”, of course, I mean “completely boring chore which, frankly, 90% of us would probably rather do without but we don't want to be called Scrooge...again...” But anyway, some of us don't have that [insert choice of word here]. Yes, Great British public, I'm referring to the politicians.

The leaders of the three main parties have just revealed their personalised Christmas cards, and it's actually very interesting to note the different styles they've gone for. Rarely has it been so telling.

Once In Call Me Dave's City

David Cameron has gone full statesman on it. Standing outside what is clearly his birthright, he's playing quite a clever [Christmas] card here because he's flanked either side by Chelsea Pensioners before hosting a reception for the war veterans. Classic, well-constructed, striking colours, traditional, statesmanlike. I call it Once In Call Me Dave's City: 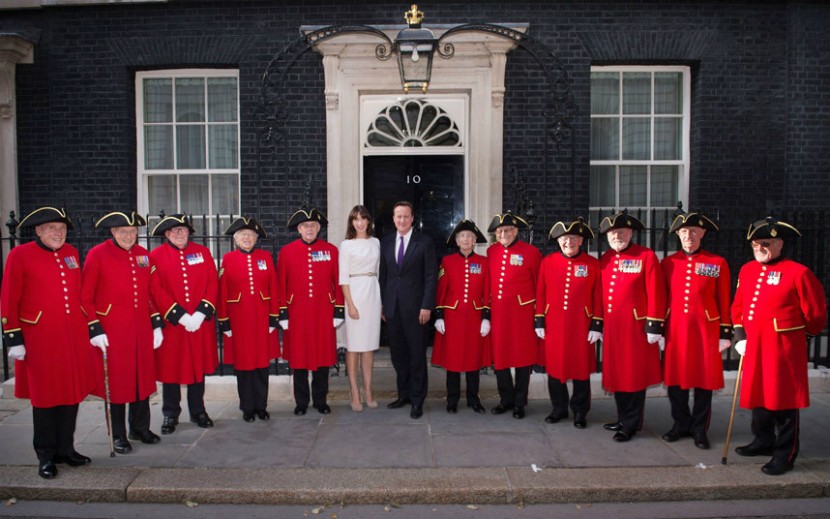 I'm going soft, I know, but I feel slightly sorry for Nick Clegg

I'm going soft, I know, but I feel slightly sorry for Nick Clegg who, for a long time (if not still) was (is) the most hated man in Britain. So you've got to give him the benefit of the doubt for wanting to make a wacky Christmas card. Going for the “photoboothing” trend, this is actually quite a decent series of snapshots that show a good, fun rapport between him and his wife, Miriam Gonzalez Durantez. If one of my friends sent me a card of themselves and their partner doing this, I'd be pretty happy to receive it. 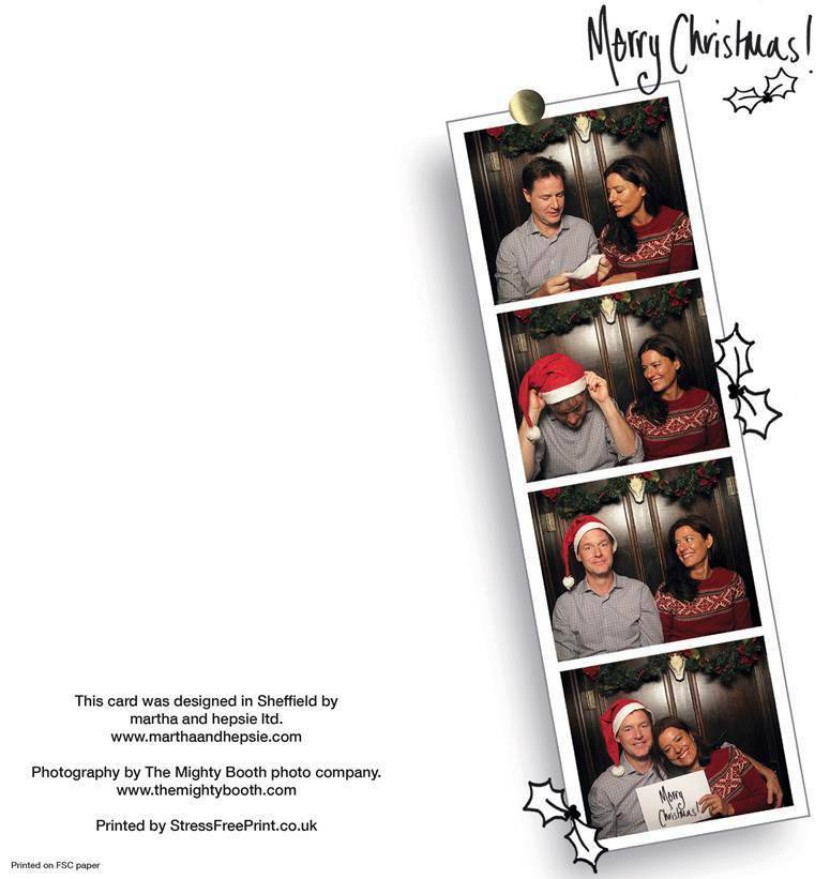 The wannabe Prime Minister who never will be

I also feel quite sorry for poor Ed Miliband. Rightly or wrongly, he just looks so awkward – constantly surprised that he is where is. He's like the wannabe Prime Minister who never will be. But being Christmas, I'm ever so glad to see him having fun with his family. And as family portraits go, this one is right on the money. Not only are they making Christmas cards – big thumbs up for that one; it's a lovely, fun tradition – but it's absolutely the most natural we've ever seen him. Good call. 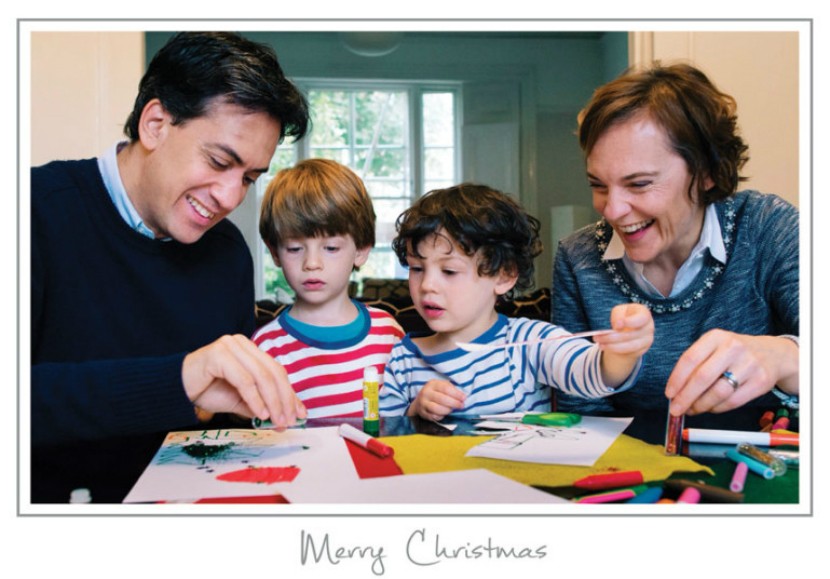 I know he's no longer our business, so to speak, but I had to mention him. By stark contrast we have the hideous Blair. I mean the hideous Blair CARD. Sorry, forgot that last word. Words can't really describe how bad this is. In fact, it's so bad that it's worthy of a caption competition. Current offerings (by me) are:

Is this going to take long? My colostomy bag's full.

Cherie, I've told you not to touch me there.

I thought she'd get better with age.

Earning tens of millions from the private sector doesn't buy happiness, you know.

Sorry about the war 'n' shit.

His heart's in here somewhere...

So, with that in mind, what would Christmas be without a festive competition? Post your own caption suggestions below and win a fantastic prize*. (terms and conditions apply) 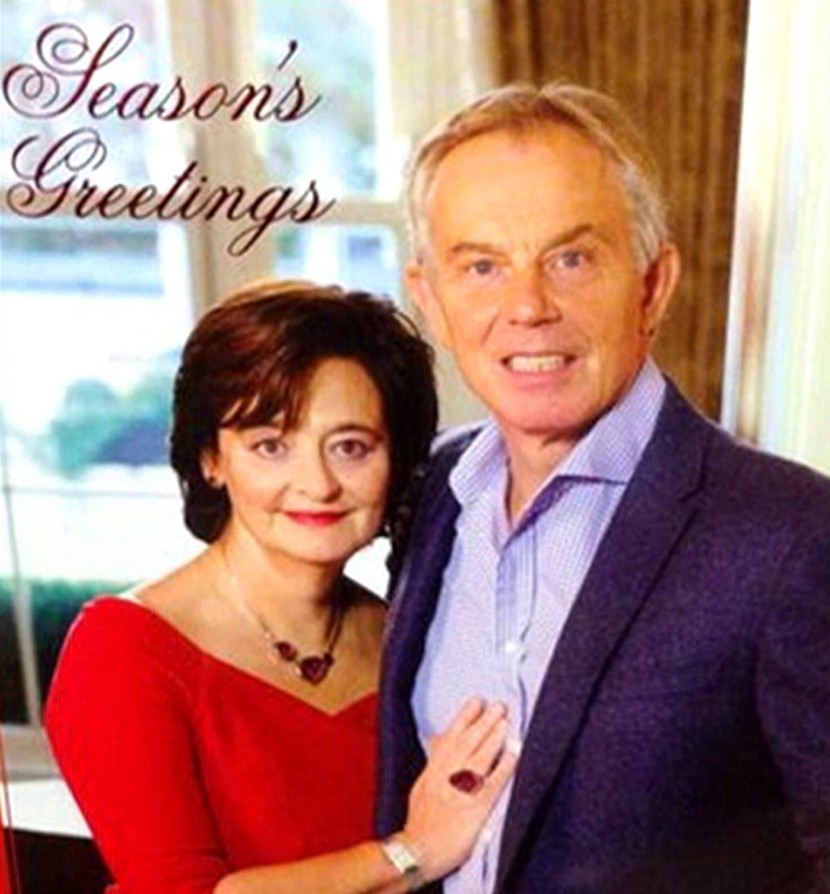 *The prize is making the Creativepool office laugh. What could be more rewarding than that? (And we're not made of money, you know. Bah, humbug!)

Blair-larious! Thanks, Ashley. I had a good laugh at this blog. And look forward to receiving my M&S Christmas card which you are clearly sending with complete sincerity (!)