Pulitzer Prize-winning news site The Huffington Post has unveiled a preview of a bold new site design, with CEO Jared Grusd presenting the redesign yesterday as part of Advertising Week New York, and announcing that the new site will go live in 2016. The new and improved Huffington Post features a bold, responsive aesthetic that both retains and improves upon familiar elements of the site’s original design (including the trademark green and dramatic splash image) while adding a suite of updated features to make the experience more engaging for The Huffington Post’s extensive global community, including users, advertising partners, bloggers, and more. 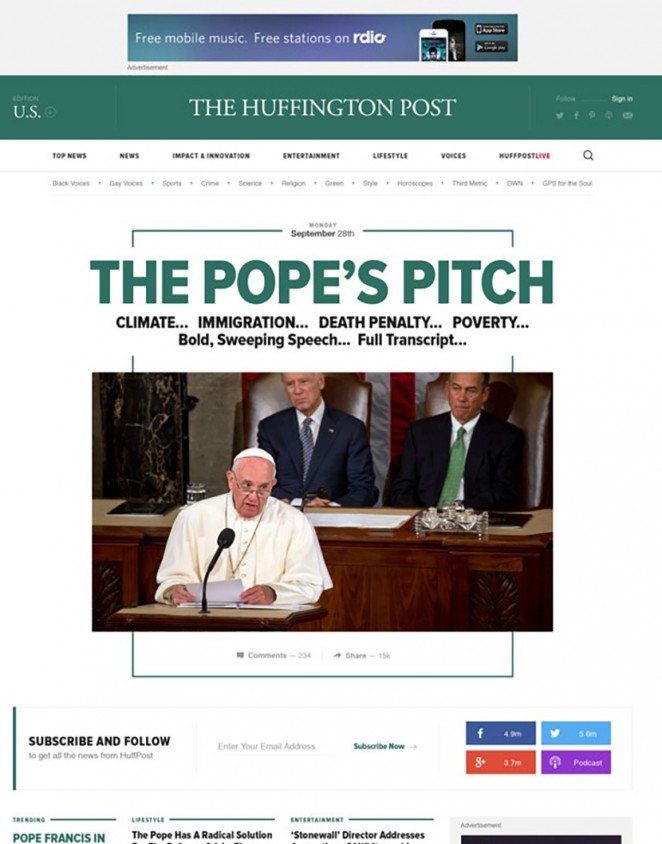 The new site retains the green Huffington Post logo and typeface, with the addition of a green banner across the top of the page. It will also include longer page scrolls, has reduced the number of story columns, and uses more images to illustrate stories on the front page. The new design is set to roll out across desktop and tablet platforms across all of the site’s international editions. 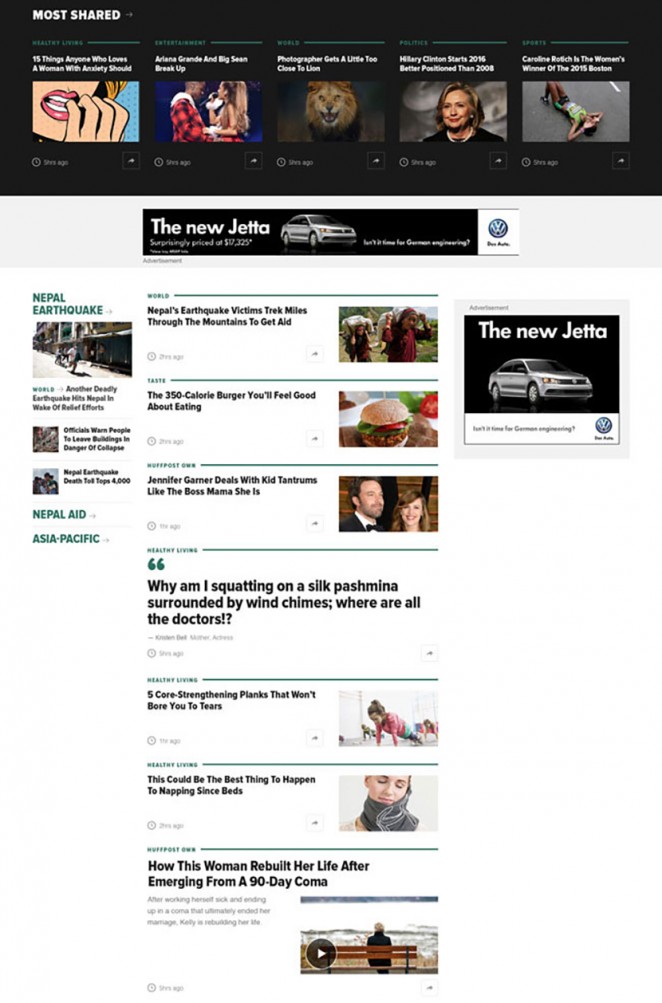 The visual changes, which were teased back in the May introduction of the new Huffington Post mobile site, coincide with a back-end overhaul created in partnership with Watson, IBM’s powerful artificial intelligence software, which is primarily used for analytical purposes. The Huffington Post’s mobile redesign began rolling out on the site’s 10th anniversary in May 2015. The redesign and mobile site transformation were both handled by design consultancy Code and Theory, who have previously spearheaded the digital transformations of Bloomberg, The Los Angeles Times, and Mashable, among others.

The redesign was handled by design consultancy Code and Theory

Grusd said: “The Huffington Post aims to be a forward-thinking platform for information, discussion and engagement with the aim of inspiring and empowering our community. Our design reinvention, a collaboration with Code and Theory, will help further accomplish this important goal.” Dan Gardner, co-founder of Code and Theory, added: “The Huffington Post has evolved immensely in the past 10 years. With this design, we are able to showcase the true wealth of content and data-driven intelligence that will advance the overall experience.”

The future of mental health has diversity, equality & inclusion at its core | A feature from NABS

Among other things, the Covid-19 pandemic has taught us much about authenticity, honesty and humanity. The Black Lives Matter movement and the murder of George Floyd kickstarted a new chapter in the debate on inclusivity and diversity, showing us the...

From the perspective of store design, how can the physical environment discriminate in retail? Discrimination is traditionally defined as unjust or prejudicial treatment of people based on a number of protected characteristics, including; age, sex,...