A report recently released by Bloomberg seems to suggest that Apple's decision to outsource less of their creative marketing to TBWA\Chiat\Day and take care of more of its marketing 'in-house' might not have been the brightest move. Results pulled from the report reveal that ads put out by Media Arts Lab, the TBWA unit responsible for the Apple account until earlier this year, performed far better than recent ads created by Apple themselves. Whilst the Californian tech giants have worked on expanding their 1000 person in-house ad team in an effort to have greater control on their advertising strategies, it is still actively collaborating with TBWA, even though since April, reports have stated that Apple is trying to distance itself from the agency.

Ads put out by Media Arts Lab, the TBWA unit responsible for the Apple account until earlier this year, have been performing far better than ads created by Apple themselves

The graph below, which is based on data from Ace Metrix, who survey TV watchers to determine how effective an ad is, shows that the best-performing Apple ads since last year, were ads created by Media Arts Lab. The top performing ad is the “Powerful” ad which featured musicians using iPhone apps to create a unique cover of the Pixies classic, “Gigantic.” The second highest performing ad was also produced by the Media Arts Lab, and was the ad which aired over Christmas, showing a teenager filming his family's festive fun on his iPhone 5S. The worst-performing ad, however, is Apple's own “Greetings,” which was little more than a condensed version of the video shown to first introduce its iPhone 5C last September. The TBWA ads are generally far more creative than the Apple offerings, which might go some way towards explaining their performance. That being said, Apple's “Strength” ad, which advertised the fitness apps available to iPhone users, was the third-highest performing ad overall. 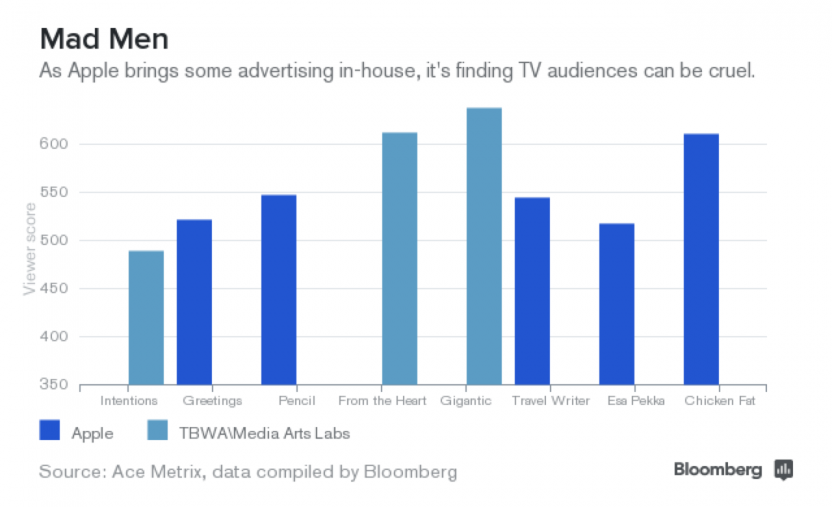 The Ace Metrix graph, which shows how much more effective the TBWA\Media Arts Labs ads have been than Apple's self-produced spots

Rob Silanen, an advertising consultant who created the unaired 1997 “Here's to the crazy ones” ad for Apple, believes that Apple might be struggling because they are simply trying too hard to represent themselves. He says that the hardest ads he's ever worked on were ads for himself, and references the phrase that “The lawyer who represents himself in court has an idiot for a client,” in underlining how hard it is to have the necessary perspective when you're representing yourself. Apple’s switch to producing ads in-house came soon after Phil Schiller, head of marketing at Apple, considered ending the company’s partnership with Media Arts Lab back in January 2013. The effectiveness of that partnership reportedly declined after the death of former Apple CEO Steve Jobs in 2011, as the agency's celebrity-laden 'Sir'i ads and disastrous 'Genius TV' spots were widely panned.

“The lawyer who represents himself in court has an idiot for a client,” Rob Silanen

To offset this news, which should have TBWA looking decidedly smug, it was announced yesterday that Justin Manfredi, the networks's deputy director and head of account management, left the company for a role in “Client side” work with video game publishers Activision. Manfredi had worked in accounts at JWT, Deutsch New York/LA and San Francisco’s AKQA, joined TBWA approximately one year ago as part of a move the agency made to ramp up its digital West Coast staff in 2013. He joined at the same time as Larry Lac, Eric Fader, and Vaino Leskinen, all of whom were respected industry figures. Before his time at TBWA, Manfredi was the senior integrated account director at David&Goliath.

Benjamin Hiorns is a freelance writer, musician and staunch Apple user from Kidderminster in the UK. He went Mac around 7 years ago and (to paraphrase the saying) it's doubtful he will ever go back.

A company with no "Dreamer" or spiritual leader ... There is no marketing team that can help TBWA... BBC... BBDO... JWT... Marketing folks work their magic only if there is something to start with. Right now Apple is not showing vision. Right now all marketing folks could do is more of the same... APPLE need a true leader.

"It takes a great client to do great work."