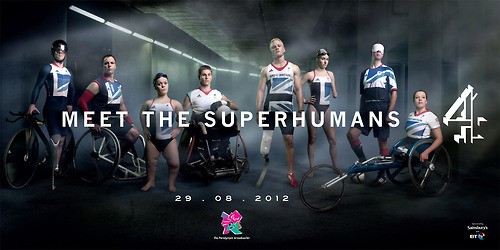 The aftermath of the Olympics has been a bleak and disorientating time. Doctors have had to treat a number of patients suffering from Post-Olympic-Depression-Syndrome, or PODS as it is now known. It does feel like Boxing Day, or like the day   after you have come back from a really great holiday, a numb feeling that normal life will never be quite the same after knowing such fun and excitement.

But hang on a minute, all is not lost, we still have the Paralympic Games to look forward to after a little break and it seems that all the pride, adrenaline and general mass hysteria is being directly transferred to the next lot of games. Channel 4 are in charge of broadcasting the Paralympics and have made an outstanding job of spinning an amazing advertising campaign around it via posters like the one above.

And amazing TV adverts like this. "Meet The Superhumans" could just be the best tagline of the year. Channel 4 has upped it outdoor advertising spend by 50% including buying up all 90 of the crosstrack projectors on the Underground.

Following the success of the Olympics and the mounting anticipation of the Paralympics the advertising world has been going mad with brand giants such as Tesco, Apple and Google all tripping over one another to buy up ad packages for the Channel 4 coverage. There are also brands such as Auto Trader, Aviva, B&Q, Colgate, Comet, Go Compare, Kellog, Land Rover, Mars, Renault, Tropicana and Volvo all trying to get ahead of the games as it were and flashing huge amounts of cash so they get their moment in the limelight.

Google have already claimed that this year's Olympics have been the most "wired" games of all time following a surge of social media and search engagement.

The only problem is that none of these are actual official sponsors so strict regulations have been enforced by the games chief Lord Coe to ensure the official partners such as MacDonalds, Coca Cola, British Airways and Lloyds TSB all get a fair deal. There is a blackout period from the 21st August to 13th September during which time non-sponsors cannot feature Paralympic athletes in their advertising, they can, however, feature Olympic athletes, as Visa has done here with this ad over Westfield Stratford City shopping centre.

Spending on billboards, posters, taxis and the tube has gone up more than 30% in the three months leading up to the end of September. The outdoor sector has been without doubt, the biggest advertising winner. Nike is currently trying to get one over on official sponsor Addidas by becoming the biggest-spending non-sponsor and buying up tonnes of space at the Westfield Stratford City digital screens.

It's not all a bed of roses for the advertising world however; some brands are still exercising caution and want to see if the Paralympics are really going to hit the same heights as the main games. Some advertising sites have not been snapped up and have ended up being sold off to non-olympic advertisers. Then you've got vacant sites such as the full wrap of the Canary Wharf tower which remains empty, probably something to do with its £5m pricetag.

That said there is a definite whiff in the air that The Paralympic Games are going to be just as heart wrenching as the Olympics, of not then moreso. So chin up people, it's not over just yet, save your moping for Autumn.