”No donkey chases the carrot forever. He catches on. And quits.”

If you remember this line, you either love the advertising industry and have read up on its history, or you are part of a very select demographic, lucky enough to have seen the first creative wails of the industry itself. ‘Do this or die’ was written by Bob Levenson in response to Time magazine, and the beautiful speech below still echoes through the halls and offices of advertising industries around the world. 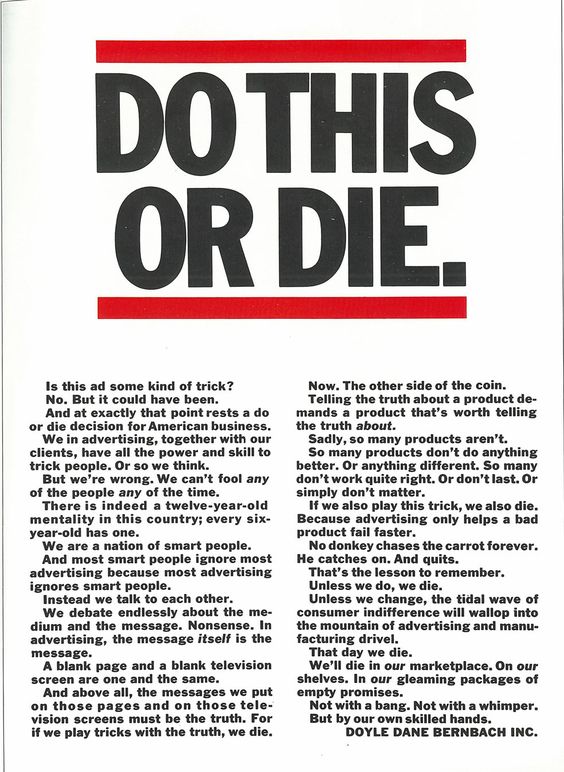 Let’s try again. “We are the innovators. We collaborate. Together, we transform brand experiences.”

Sounds familiar, heh? And yet, utterly generic. The funny thing is that I’ve just made it up – but this little piece of copy could hang on any creative agency’s homepage. And in fact, I lost count of how many times I heard something similar, with different wording but the same, soul-less core.

Advertising agencies don’t self-advertise. If they do, they are hardly memorable. Lost in thousands of ads running through the Internet every day, few try to stand out, and most choose to focus on existing work and business relationships.

You remember the ad. You don’t remember who it is from. And that is the problem with most advertising today.

Saatchi was the first over the wall. David Ogilvy ran a campaign in the New York Times to nurture the Ogilvy brand. This was in the 1970s, give or take. As are a lot of campaigns we remember, and some from the past century listed on this page by Hubspot.

The truth is that in the XX century campaigns used to advertise more. Just two years ago, as WPP’s share price was in free fall, The&Partnership did a quarter-page ad that sparked some debate over the web, with professionals in the industry begging the same question as the headline above. The&Partnership made its ‘different’ model known, the ad worked, and it was just a quarter-page ad. Compared to the fully-fledged campaigns from the Seventies that still fuel the Ogilvy brand today, it is quite a stunning achievement.

Too many agencies believe that their talent shines through their work. Arguably, that is correct – an advertising agency will only be as good as its worst ad. Long-term business and client relationships seem to be what matters, and building a strong reputation is what will bring more clients. Yes… and no. As M&C Saatchi CMO Kate Bosomworth so brilliantly hinted at two years ago, focusing on your own relationship is the equivalent of playing in your own backyard and talking to your own neighbours. There can be multiple successful ways to build your business and reputation – but of course, Saatchi can count on a strong sense of brand equity.

Perhaps that is the very core of the problem. Advertising agencies don’t really aim to cultivate a sense of brand. Some do, but that’s where the structure of a holding company can dilute an individual agency’s voice. Independent agencies are more likely to stand out for their own voice.

The point is quite simple: if you can’t advertise for yourself, how do you expect your clients to believe you’re able to do the job?

Does self-advertising work for agencies?

Self-advertising for agencies works. The fact it worked almost 5 decades ago (jeez) does not mean it cannot work now, with our gigantic OOH billboards and the power of digital. Just recently, we featured an advertising company and a campaign that cut through the noise.

London Advertising’s self promotion campaign was brilliantly written, planned and performed, drawing in celebrities and promoting the agency’s voice with very little budget. Crafted during lockdown, the campaign generated 50% more awareness in one month, according to founder & CEO Michael Moszynski, making the agency six times more known than some other established agencies, such as VCCP. 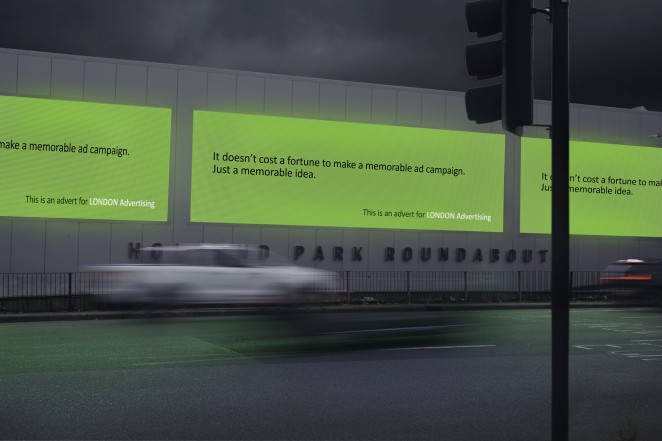 With 90% of its clients and work coming from overseas, London Advertising took the chance of the lockdown early this year to push through the global crisis and use restrictions as a catalyst for creativity. The campaign features bright green billboards, a cheeky tone of voice and the voices of Liam Neeson and Helen Mirren.

As I was working on this piece, Michael kindly invited me to a podcast together. In the Poolcast above, I had a chat with him to discuss their campaign, why agencies should self-advertise more, and what are the best ways to do it. So to wrap this up, here is a quick list of tips with general advice on how to succeed at self-advertising, if you are willing to go down that route.

How can agencies self-advertise properly?

There is one thing London Advertising, DDB and Ogilvy all have in common: their campaigns put their own voice at play. You can often hear agencies nowadays talking about differentiation and USPs, but so few bother about actually standing out with their messaging. If you are willing to self-advertise with a proper campaign, put your own voice into it. Show your identity. Foster your team spirit.

This is of course easier for independent agencies rather than those under a holding company, but the same principles apply to all. Simplicity is key: you want the message to be as immediate as possible, while still showcasing your creativity. Bright fluo-green billboards might not cut it for everybody, but restrictions can really squeeze the creativity out of your core ideas.

Most importantly, take risks. Have the balls to ask questions other people wouldn’t say. According to Michael, the London Advertising adverts were originally voiced by the agency’s creative director. It was great, but Michael decided to try to bring some celebrities on board, by asking Liam and Helen (whom they had worked with before) if they wanted to participate. Much to Michael’s surprise, although it was one shot in a trillion, they both said yes. And this led to an even more successful campaign overall, with professional TV ads complementing the billboards.

In short: see yourself as your own client. Follow any kind of advice you would give to a client, and practice what you preach. It is a long-term investment, unlikely to bring stellar results in the immediate – but it will help you build that reputation you so much crave for. And soo, you are sure to reap the results of your efforts.

“In the Seventies, agencies did do campaigns,” concluded Michael. “The only self-promotion that we see now from any other agency is a one-off ad to get some PR coverage. I don’t consider that advertising. It’s PR – it’s a stunt. Or, it’s stuff that is on digital, social media, paid-for, that no one really sees or remembers. And I think this is about the industry needing to remember what the industry is about, which is getting people to notice things, remember whose advertising it is, and act on it.”

Interesting article. While it's true agencies don't take advantage of advertising themselves, they doubly neglect self marketing by ignoring public relations opportunities like promoting their work to the ad trade press, public speaking, thought leadership, etc. Arguably, that kind of PR brings more credibility than even a well placed self promotion!

Interesting thought Eric, thank you for your comment. I do agree. In a way, we're back to the concept of building a reputation first and foremost. In the end it's down to a single agency to choose how they prefer to generate growth – Saatchi tries to go above and beyond thanks to their sense of brand equity, but different solutions will work for different people...

One thing looks particularly interesting to me: London Advertising *did* increase general awareness of their business thanks to their self advertising campaign. Perhaps it's just an option worth keeping on the back of one's mind, all things considered.