On 24 May 1988, the United Kingdom introduced a nasty little clause, stating that a local authority “ shall not intentionally promote homosexuality or publish material with the intention of promoting homosexuality.” This was just 30 years ago.

If you think about it, 30 years aren’t really that long. Luckily, the UK needed only 12 to come to senses. With a procedure starting in February 2000, Section 28 was repealed, leading to a gigantic win for the LGBTQ+ community and human rights in general. And so, the UK LGBT History Month was established to celebrate that huge milestone.

As part of our planned series to celebrate LGBT History Month and diversity, today we are looking at the best marketing and advertising campaigns ever made to champion diversity and inclusion – many of which I’ll draw from the Creativepool community itself.

Gay Times – Until Every Queer Voice is Heard

In the second half of 2020, creative team Ryan and Emma from Grey London worked on a stunning campaign for the Gay Times, a charitable initiative named Amplifund. The initiative supported queer media outlets in countries where it’s illegal or dangerous to be LGBTQ+, and uses typographic storytelling to tell the stories of the people affected.

We loved this campaign so much that we did a nice Behind the Idea on it. The initiative was obviously a great success and it included online and print adverts. 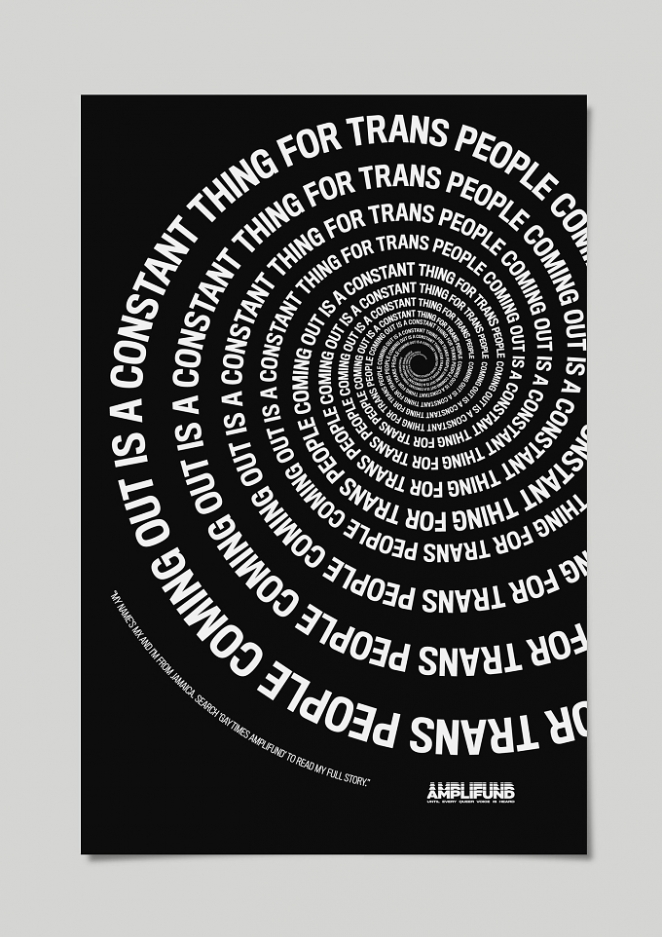 Careful, we’re going historical here. Back in 1994, when advocating openly about LGBT rights as a company was still frowned upon, IKEA took a decisive stance for its brand and aired one of the first ever LGBT TV commercials in the history of advertising. The commercial was created by Deutsch and named Dining Room, and it showed a same-sex couple talking about living with IKEA furniture.

Later, the crew admitted being extremely anxious and worried about the ad, fearing it would spark enormous backlash in the brand’s target consumers. Sure, there was some backlash, mainly from the bigot side of the spectrum; but the company is still reaping the fruits of all the good heart and faith it put in that commercial, and it is today more committed to supporting LGBT communities than ever.

Last year was a challenging one for the LGBTQ+ community as well. Stuck at home and mostly discriminated against, queer people were not even able to celebrate Pride month as they usually would, with all the regulations in place for public gatherings and social distancing. Of course Stonewall had to be one of the prime supporters of the community in such harsh times.

In a partnership with Mr. President, Stonewall took over the giant Piccadilly Circus screen in London to show support to the entire UK community. The screen was used to share real-life lockdown stories along with messages of support.

Subaru - A campaign that made history

The association between Subaru and lesbians is the matter of stand-up comedy jokes and pretty much a given, but it all comes down to this historical campaign from the mid-90s. Around the same time when IKEA released its ad, Subaru realised there was an interest in its products on behalf of a female demographic – more specifically single women and lesbians. So the company embraced those findings and came out with a brilliant campaign celebrating diversity.

The print campaign showed messages of support such as ‘It’s not a choice. It’s the way we’re built,’ and ‘Diversity is one of our strengths too.’ It was a groundbreaking campaign for the times and one that certainly made history, establishing a certain target audience and demographic for Subaru and its products. 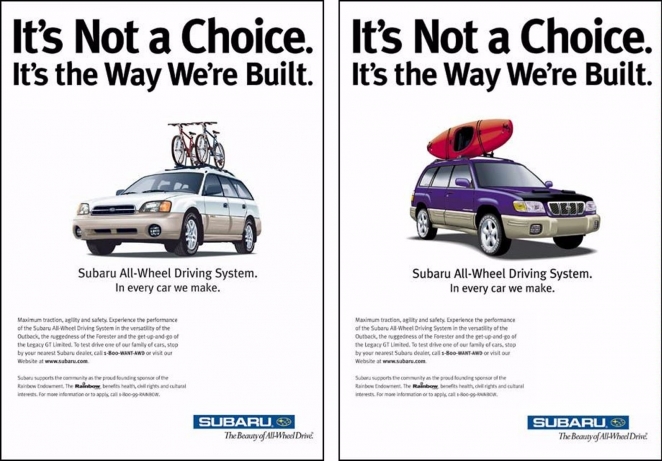 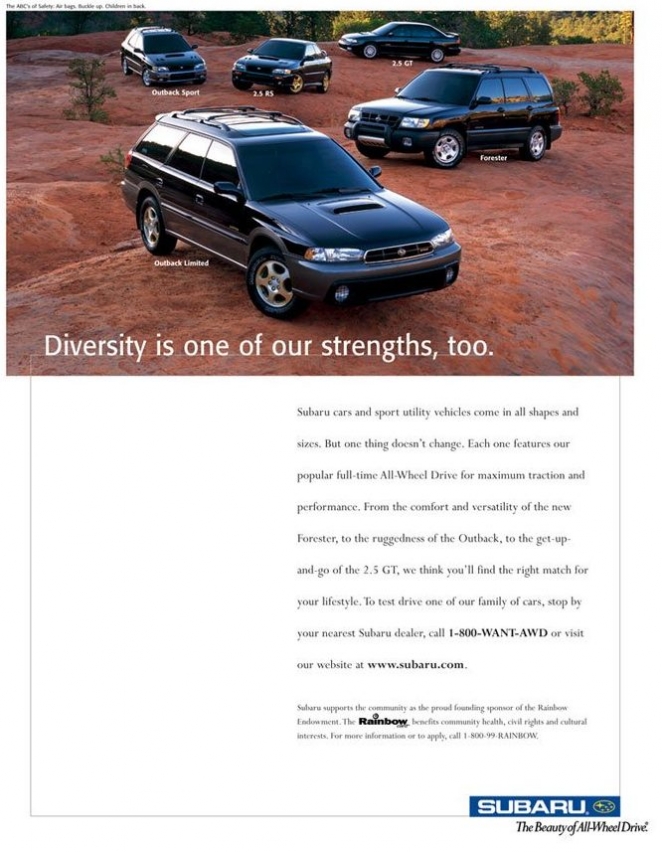 Starbucks has a long history of supporting the LGBT community, and this beautiful ad in partnership with Iris Worldwide was no different. #WhatsYourName depicts the challenges of James, a transgender man who is transitioning and does not identify with his birth name ‘Jemma.’

The brief, powerful 60” film recognises that every name has a story and it shows support to all the transgender people in the LGBTQ+ community, led by the understanding that only 0.3% of TV adverts feature a transgender person. An amazing campaign that extended in store as well, thanks to the introduction of Mermaid Cookies to support the Mermaids charity. The campaign won Channel 4’s 2019 Diversity in Advertising Award.

Skittles - Give the Rainbow

It was 2016 when Skittles decided to strip away the colours of the rainbow from its packaging and candies, as part of the Give the Rainbow initiative. It was a much discussed campaign and one that sparked some criticism as well, as some on social media pointed out that the choice of pure white could be to celebrate a ‘White Pride.’

Of course Skittles had no intention whatsoever of celebrating white supremacy – white is technically ‘the absence of any colour.’ The company released a statement to clarify its position back then, and has periodically introduced the same packaging during the various Pride Months, giving all the earnings from sales of the special edition to charity.

Absolut Vodka was one of the very first brands supporting the LGBT community all the way back in 1979, advertising in the LGBT press when others wouldn’t. In 2015, the brand partnered with AnalogFolk to release a limited edition bottle with the colours of the Pride flag, alongside the message that #LoveIsLove.

The agency teamed up with influential Instagrammers in 11 major Pride cities, asking them to share their experiences through their content and spread the word about Absolut’s campaign and messaging. This resulted in a wide array of content shared all across social media, which Absolut then adopted and re-shared on its own feeds. 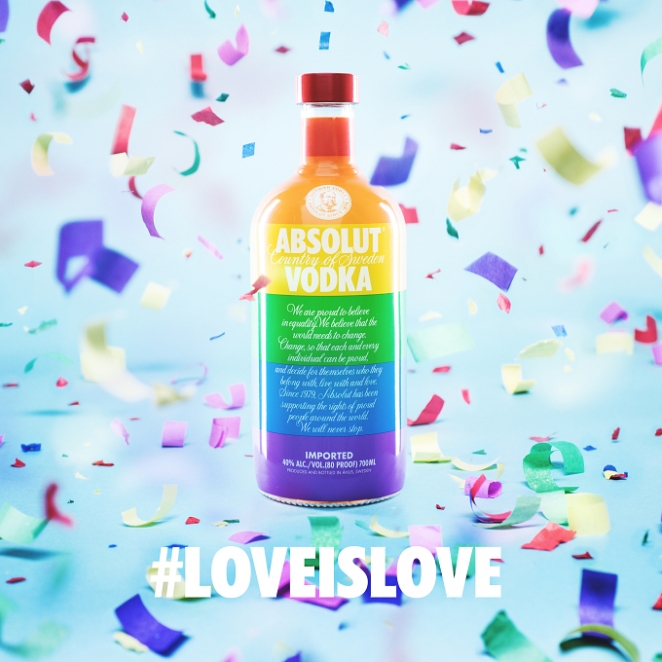 Brands love playing with the Pride flag colours in their campaigns, and this adorable campaign by Oreo is no different. Posted in June 2012 on Oreo’s Facebook page, the rainbow cookie sparked some controversy at the time and is still gathering comments today, showing the power of something as simple as stacking a bunch of colours in your main product.

And while some consumers at the time have accused Oreo of jumping on the political bandwagon (pointing out that LGBT rights are completely unrelated to cookie production), we know after 2020 that things are likely to change, as we see even more brands than before engage in social/community issues. So in hindsight, you could almost say that Oreo was a pioneer. And by the way, they actually released the limited edition rainbow cookies in 2020. 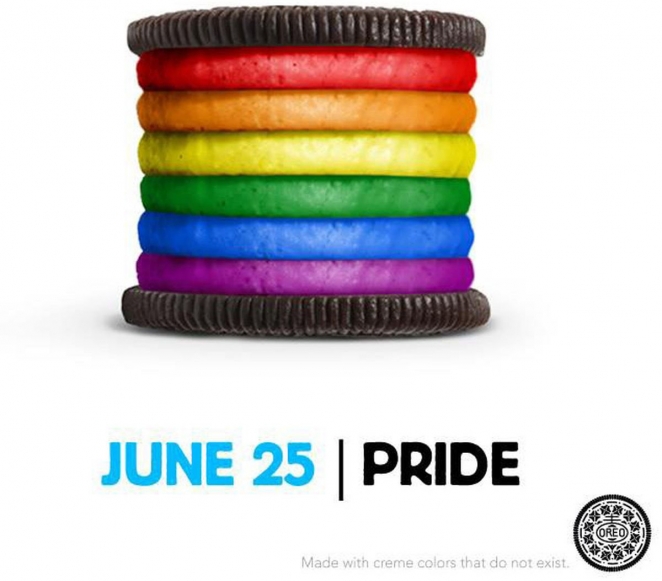 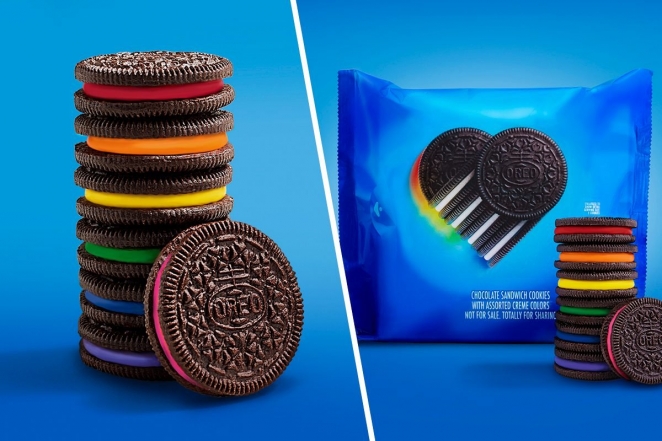 LGBT Foundation – Locked Down and Out

Possibly one of my favourite campaigns from last year, and certainly among the best ones on this list. Created by The Gate London for the LGBT Foundation, Locked Down and Out recognises the struggles of the LGBT community during lockdown, forced to stay indoors with a family that may not understand their identity or needs.

The short ad is extremely compelling and features the story of a young trans girl who is caught wearing make-up by her intolerant mother. The campaign aimed to raise awareness of the LGBT Foundation helplines and to gather donations for the charity at a time when lockdown was hitting it the hardest. It features trans actress Miya Ocego in the lead part.

Lloyds Bank – For Your Next Step

In 2016, Lloyds Bank was recognised as the 2nd ranked Stonewall employer for LGBTQ+ rights. One 60” film ad from the same year shows the iconic brand horse ‘being there’ through all the most important steps in life, from having a baby to seeing your child go off to school for the first time.

With great elegance and simplicity, the ad features a marriage proposal from a same-sex couple as part of the most meaningful moments in anybody’s life. It is subtle and almost barely visible, but in a way, I recognise that that’s how ‘normal’ should look like. Non-intrusive, normalised ways to show a reality that is already part of society and our daily lives. In this sense, the Lloyds ad nails it.