Studio Output are changing young people's perception of voting with Rize Up - a self-initiated, party-neutral campaign aimed initially at getting young people to register to vote, and now accelerating at full speed to make sure they go to the polls in the UK General Election on June 8th.

"To be represented, we need to represent"

Working alongside Rize Up's creator, film-maker and photographer, Josh Cole, Studio Output brought the campaign to life over the course of 48 hours following the snap election announcement earlier this year, injecting their skills in brand identity and communications, art direction, social content and social strategy, into the campaign’s design sprint. Aimed at the homeless, the under 25's, and the economically dispossessed, Rize Up has a deliberately anti-establishment tone of voice and remains independent of any political party. In short: it’s all about empowering the underrepresented through the aids of art, design and music.

Statistics show that the majority of the 15 million people who didn’t vote in the last UK Election fitted into the aforementioned three categories. And that gargantuan figure (which outnumbered the supporters of every single party in 2015) is the biggest tool the coming snap election has in bringing about some real change.

Ian Hambleton, Chief Executive at Studio Output, said: “This is not about getting people to vote a certain way, but rather ensuring a higher proportion of young people are exercising their democratic rights. Only 43% of under 25s voted in the last election compared with 78% of over 65s, and arguably government policy reflects this bias.”

To enable, inspire and empower the younger generation, Rize Up encourages artists of every sort to get involved socially, from retweeting and reposting, to creating bespoke videos which share the Rize Up message. Impressively the movement attracted the likes of Rudimental, Tinie Tempah, Professor Green, Akala, Doc Brown, Riz Ahmed and Maverick Sabre within hours of its launch, and legendary grime producer 5ive Beatz also created this beat to support the campaign, encouraging young MC’s to record their own bars to go alongside it and share.

Under the taglines “To be represented, we need to represent” and “Be heard, not herded”, Rize Up also seeks to help anyone who doesn’t have a fixed address by giving them clear and direct information about how they can get their vote counted.

Since it’s inception, many other creative agencies have pitched in including Creature of London, Tokyo Digital and Be-Hookd. The results are astonishing as well: Over 1 million 18-24 year olds have registered since Theresa May called for an election on April 18, with 246,487 registering on the last day (Monday 22nd May) alone. 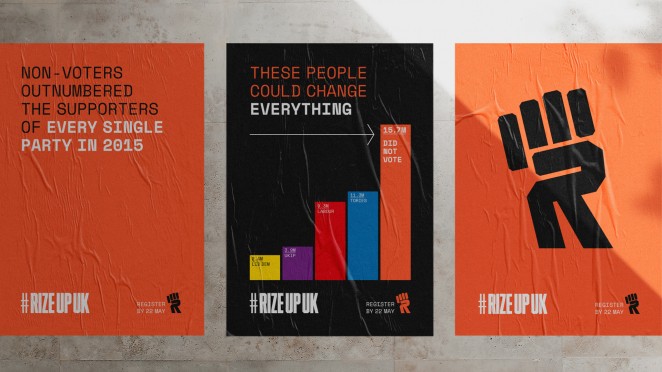 With the campaign making waves across the art, design, music and political spheres, the last stage in the assault includes music videos, articles in magazines such as NME, interviews on the BBC, and partnerships with Shelter and Big Issue. It all goes to show how much of an impact we can have in the creative sector if we work together to empower.

Check out Rize Up’s Facebook page for more information about what they’re doing and when.