Comic Relief 2017: The Brands and Agencies getting in on the LOLS

Whilst Comic Relief might be built around the BBC marathon, which takes place tonight (Friday, March 24) on BBC One (and features the much-discussed Love Actually sequel), there is so much more behind the charity event that often gets overlooked, particularly these days, given the rise and convenience of social media as a platform for charitable promotion. As such, here I've collected a few of the more inventive campaigns from some of the more inventive brands and agencies, all of whom were eager to get into the spirit of the event and lend their time, effort and creativity to the cause. 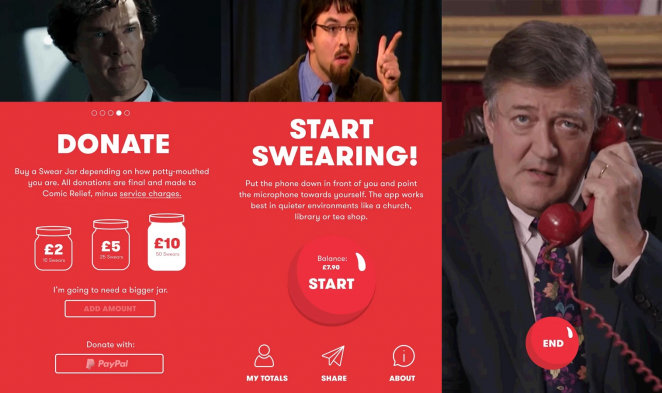 We’re used to turning our noses red for Comic Relief, but this year, the charity wants our language to be colourful. Comic Relief launched the first digital swear jar; an app created by Grey London, which uses voice recognition technology to turn the filthy words that come out of our mouths into cash for charity. A modern take on the most traditional fundraising technique, the app was launched last week with the support of celebrities including Ricky Gervais, Renee Zellweger and Bill Nighy. Celebrities also took part in the “Swear Jar Challenge” as part of the campaign. Rufus Hound kick started the challenge by swearing as much as possible in 20 seconds and nominating his celebrity friends to do the same.

Using the latest voice recognition technology from Google, when switched on, the Swear Jar app recognises when you or one of your potty-mouthed friends swear. We shit you not. Make a donation and the app will identify and tally up your swears. At the end of the session you can see how you fare on the ‘wall of shame’ against other app users. If you still have credit left, just start another session. Or if you reached your cap but you’re still not done, simply donate again. And if you’re having a particularly bad day, to make sure you don’t donate your entire savings, an up-front donation limit keeps it in check. With 42 swear words listed in the app, Brits will have plenty of opportunity to contribute to Comic Relief in a way never been seen before. 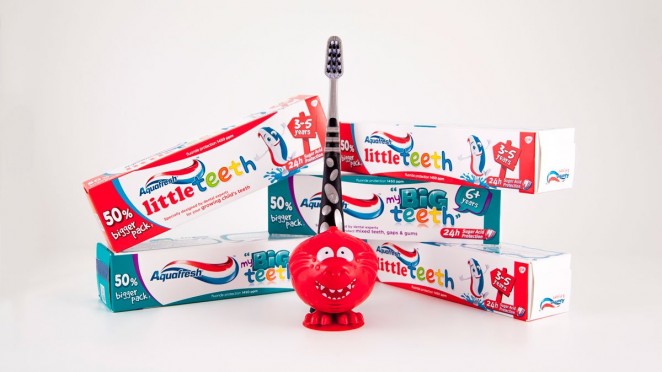 Aquafresh and parent company GSK lent Comic Relief some super hero support this Red Nose Day through an exciting new partnership. To celebrate the Aquafresh and Comic Relief partnership, two million Red Nose Day branded Aquafresh packs have been released, and will remain on shelves through to the end of March, with 10p being donated to Comic Relief from every pack purchased. As well as the Red Nose Day branded packaging, which will appear across the Little Teeth, My Big Teeth and Complete Care ranges, there will also be a special on-pack promotion live throughout the key Red Nose Day period for retailers to get behind. Specialist packs will offer consumers the chance to win ‘Snuffles’ a huffing, puffing, burping, singing Aquafresh Bonkers Brush Timer, based on one of the nine new Red Noses and created by the Life agency, to inject some comic relief into the family’s daily brushing routine. Aquafresh will further support Red Nose Day by engaging with UK primary school children through an educational booster pack sponsorship. With one in 10 UK parents admitting that their children go to bed once or twice a week without brushing their teeth, it is essential that parents and children are educated about the importance of a daily care routine and how this can still be enjoyable. The Aquafresh Comic Relief partnership has been supported by a media campaign, which includes a TV tag, in store POS, PR, digital and social media. The PR activity, aimed at driving online and media conversation around the partnership, will kick off with comical video content. Leading parenting media and influencers will be challenged to make a dentist laugh with their kids’ favourite jokes. These videos will be housed on Aquafresh owned channels.

Dubbed the 'ultimate joke generator' the Lolgorithm project from TK Maxx and Homesense comprises a microsite and a Facebook Messenger chatbot. The tech will guess a user's sense of humour dependent on their Facebook activity, or from their responses to three random questions, before serving up a gif or a one-liner designed to make them chuckle. Taster questions include: 'If you had a spaceship and could go to one of three planets, which would you visit?' giving players a variety of options to choose from such as 'A Planet where people walk on their hands; a planet where everything rhymes; or a planet which is exactly the same as Earth, but just slightly bigger.' 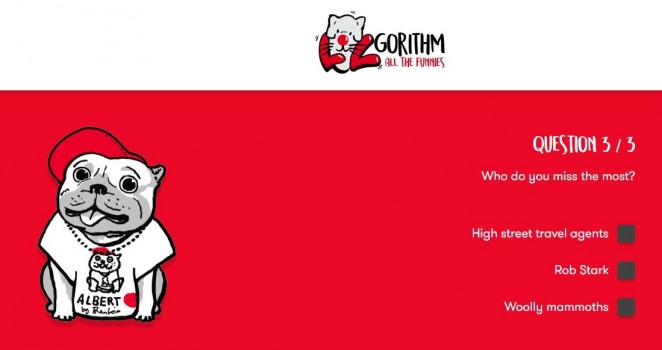 Once the information is gathered the gif or punch line will be delivered, and the bot will also send a meme featuring one of the nine animals from TK Maxx's Red Nose Day t-shirts created in collaboration with fashion photographer, Rankin. The products, for which the majority of the profit goes to Comic Relief, feature an array of farm yard animals including a goat, a horse and a French Bulldog wearing Comic Relief red wigs. The line has been modelled by comedian Jack Whitehall, Game of Thrones start Maisie Williams, presenter Caroline Flack and many more famous faces as part of T K Maxx's promotion. This is not the first time the discount retailer has collaborated with a fashion icon for Comic Relief. The likes of Vivienne Westwood, Stella McCartney, Anya Hindmarch, Karl Lagerfeld and many more have each created unique designs to raise money to help people struggling in the UK and across Africa.

Scarlett Moffat and the 10,000 Babybel Billboard 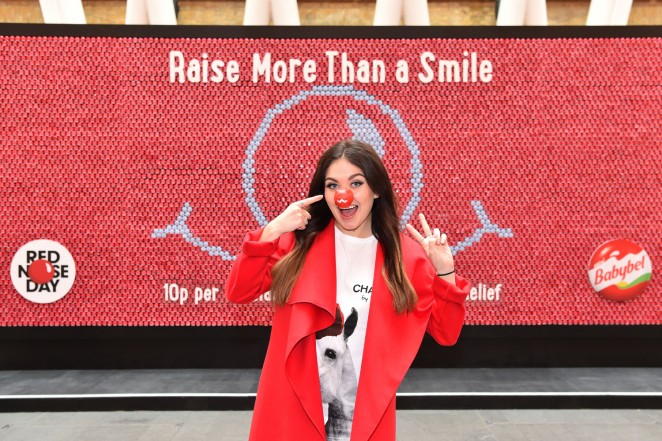 Mini Babybel and Gogglebox's Scarlett Moffatt unveiled a giant edible ‘Belboard’ at London's King's Cross station on 8 March. Measuring six metres wide by three metres high, the board was made up of over 10,000 Mini Babybel cheeses which were picked off by members of the public and enjoyed en route. Passers-by were encouraged to help themselves to Mini Babybel treats from the huge cheeseboard while brand ambassador Moffatt was on hand to create laughs amongst commuters with some witty one–liners. Tying into the true spirit of Comic Relief, every little cheese was wrapped with a joke, with the aim of adding a 'mini laugh' to people's lunch boxes. The BelBoard celebrates an ongoing partnership between Mini Babybel and Red Nose Day. Over the last ten years, Mini Babybel has helped to raise almost £1million for the charity. Babybel rolled out a 'make your face funny for money' fundraising initiative throughout UK cinemas in 2015, in collaboration with Comic Relief. Cheesemaker Castello opened an experiential pop-up in east London in 2014.

PG tips is the official Red Nose Day partner for the 2017 charity fundraising initiative, organised by charity Comic Relief. The brand launched a #1MillionLaughs campaign to get the public sharing jokes across social media using the hashtag, and has committed to donating £300,000 to this year’s Red Nose Day, making a donation for every promotional pack sold, plus encouraging PG tips fans to give more. The #1MillionLaughs campaign has been supported by out-of-home activity and social media support, including sponsored posts on Facebook and Twitter, a new Snapchat filter and a ChatBot. PG tips also launched limited edition packs featuring jokes inside to inspire consumers to take part.

The PG tips ChatBot, meanwhile, is an online tool which will allow consumers to message the PG tips Monkey brand character directly via @MostFamousMonkey on Facebook Messenger and get jokes back. The ChatBot will also encourage users to donate via the app or ask questions about the charity and what the money is used for. Monkey, the brand character who fronts PG Tips’ advertising and marketing, is actually owned by Comic Relief and used by PG Tips under license. Comic Relief has the rights to Monkey as the result of a legal settlement over ownership of the character between the receivers of ITV Digital, the digital pay TV channel which shut in March 2002. Monkey was created by advertising agency Mother and made by Jim Henson’s Creature Shop (responsible for The Muppets) for ITV Digital’s advertising campaign, which also featured his partner Al (still played today by comedian Johnny Vegas). 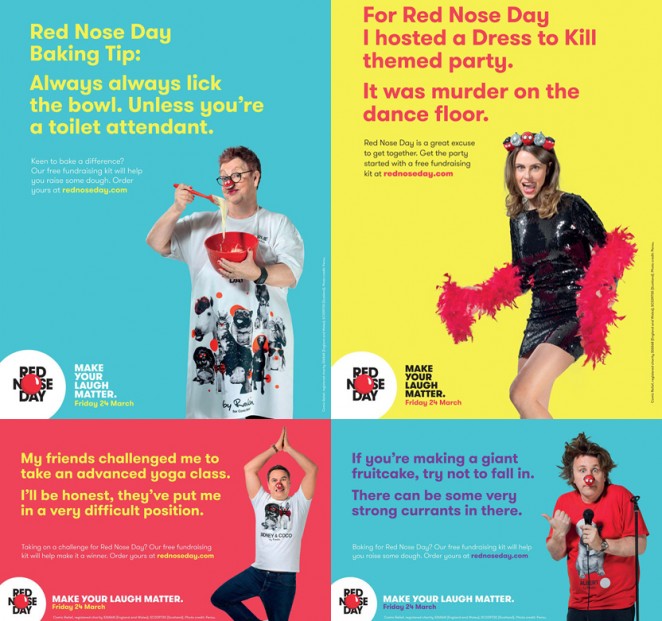 Celebrity Portrait photographer PEROU was commissioned to shoot a gaggle of comedy stars for Comic Relief 2017. PEROU worked with Jo Brand, David Walliams and Lenny Henry amongst others to create the campaign with the JSR Agency.

Benjamin Hiorns is a freelance writer and struggling musician from Kidderminster in the UK. Here's a little extra something. Because I really quite like it.