The new ICA show Looks is a group exhibition presenting work by the likes of Wu Tsang, Stewart Uoo, Juliette Bonneviot and Morag Keil opening 22nd April until 21st June. It’s an investigation into our contemporary relationship with technology, looking at how mass digital culture shapes our lives and identities. But unlike other art institutions, the ICA know that a conversation about tech doesn’t necessarily mean you need to plaster post-Internet GIFs and screenshots of MacBook Air backgrounds everywhere. The curators sensitive dealing with technology is explored through photography, oil painting and video art, as well as installation. For an exhibition looking at the future of technology, the mediums seem rather old school. But that only helps to highlight the discrepancies between how we use technology, and how we don’t always have to. 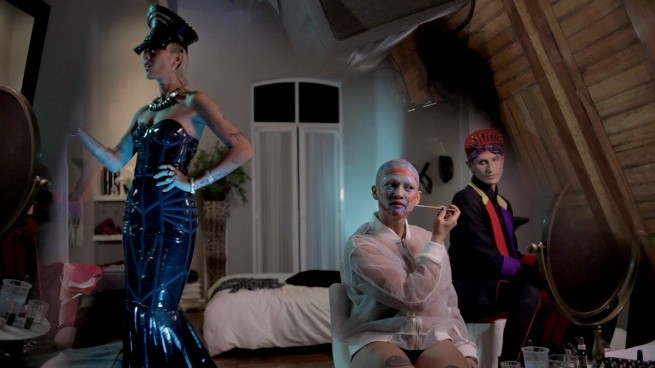 The key piece that summed all this up for me was Wu Tsang’s A day in the life of bliss, a film that follows a young underground perfomer and popstar Blis, played by art darling boychild, through a dystopian society watched over by the Looks. This sinister surveillance group has evolved from resent-day algorithm-based metadata systems. In a concept not a million miles away from the truth (thanks Edward Snowden), this technology tracks all exchanges between people and can control public spaces.

Gender-performance is a pivotal theme, with characters altering their identities through clothes and facepaint, before derobing on stages and choreographing their faces as much as their movement. Cyborgs and Biblical images collide, as the two screens and two mirrors create a feeling of being watched at all times. In fact, a genius touch comes from a two-way mirror, allowing the viewers to become voyeurs in the exhibition space too. It’s a disturbing piece of artist film, well worth the 20 minutes it takes to watch. Thudding music and evocative movement take us through the loose narrative with power and surrealism. 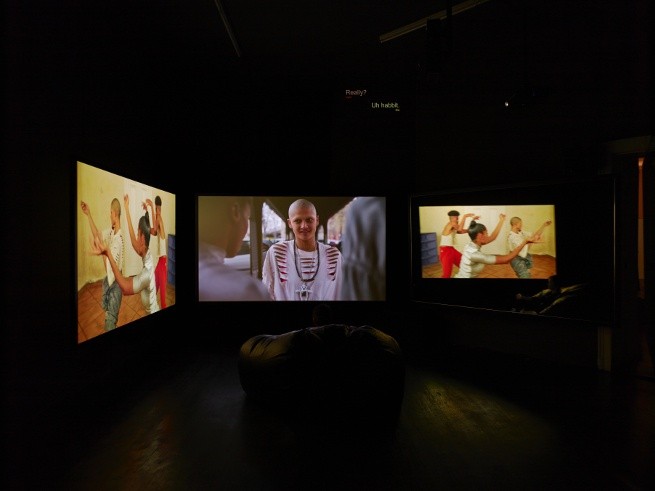 Juliette Bonneviot's large-scale paintings Xenoestrogens take a poke at art world norms. Her canvases are either matted or shining with one colour, we could have been looking at Mark Rothko inspired abstract expressionist painting. Yet these monochrome paintings are made from materials that contain chemical compounds that act as xenohormones. These alter the behaviour of mammels, particularly in terms of gender behaviour. Colour and chemicals merge, asking the viewer to question what it is we come into contact with one a daily basis. From oestrogen to silicone and PVC, these are everyday chemicals that have more of an effect than we may think. Sorted by colour and presented as a series of monochromes, under the layers of paint lurks something more sinister and thought-provoking. 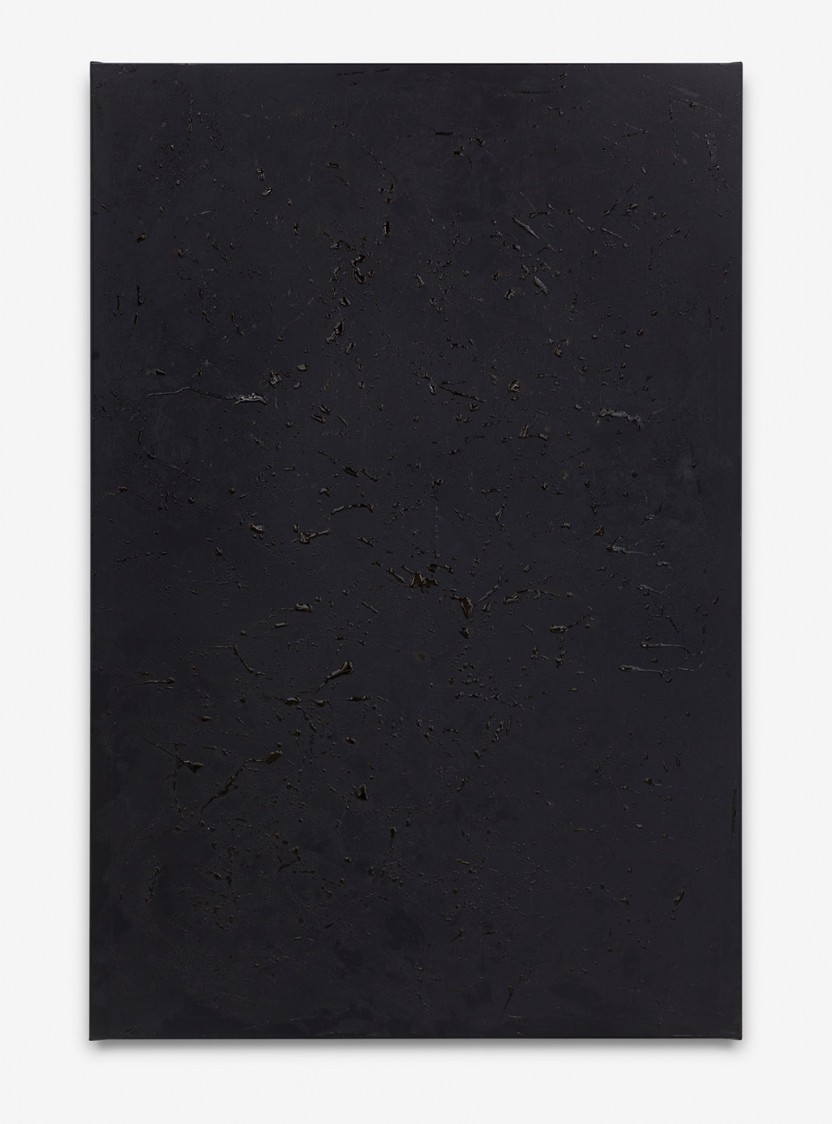 As you approach the main room on the bottom floor, you’ll find a collection of different pieces by Stewart Uoo and Morag Keil, each complementing each other. Uoo’s sculptures wrought modern fashion into a hanged position, with pieces Don’t Touch Me (Boyfriend Jeans) and Don’t Touch Me (Ghetto Goth) particularly standing out. They keep watch over Uoo’s large, printed rug Confessions (Spring Break-Up) which depicts a mocked up magazine front cover full of paranoia-making statistics: “30% of you were cheated on this spring break”. This contemporary comment is broken down through the sinister aspects of the twisted mannequins. Alongside all this, Morag Keil’s video work plays with out preconceptions, letting us sink into easy references before subverting them. 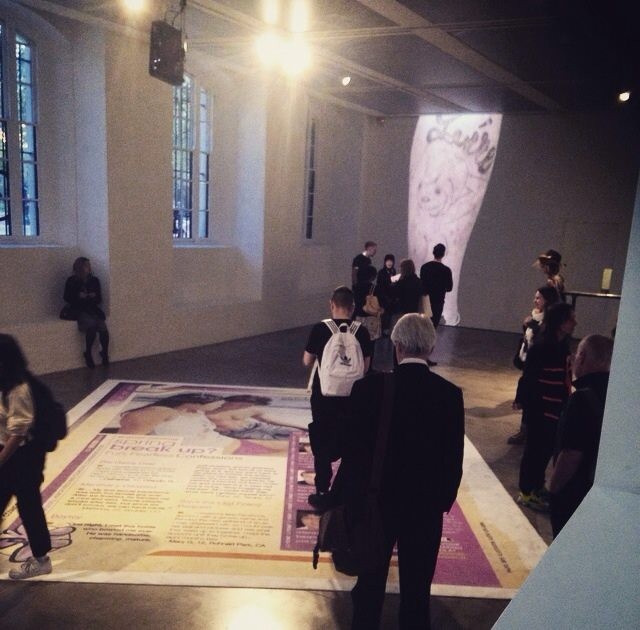 Looks is an ambitious look at how we engage with media and technology, asking how we construct our personalities in the onslaught of narratives coming from all angles. It's asking us to look beyond concepts of ‘post-internet’, ‘post-feminism’ and ‘post-racial’…perhaps we will never enter into those places, they say, until we embrace our 'post-human' existence. Technology is taking over; the physical body is no longer the all-being signifier. Are we always performing online? Always engaging in a performative version of our self, without respite? The ICA exhibition is trying to answer (or at least ask) these questions. 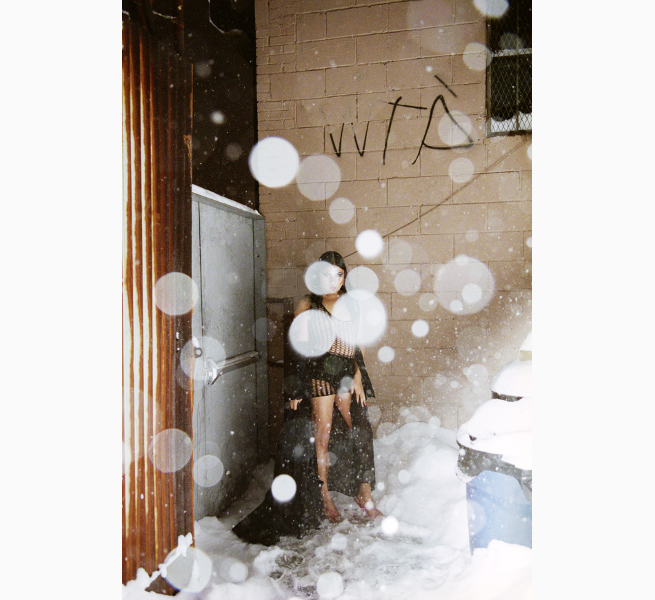