Last Friday, Soto launched the hugely anticipated Converse X Stüssy collaboration. The only spot for such a clash of lifestyle brands was the shop Soto, with drinks provided by Bulleit and Clique Bier. A selection of hip hop hits filled the streets of Mitte to launch the two brand giants fifth collaboration.

Philip Gaedicke, Omer Ben-Michael and David Fischer, who all have extensive experience in the menswear game, founded Soto (Torstraße 72, 10119 Berlin Mitte). Taking their style tips from lifestyle choices, rather than catwalk didacticism, the shop strives to bring the men of Berlin the best in contemporary clothing. Inspired by American and Asian designers, as well as those on their European doorstep, it’s a mix of fashion statements rolled into one store. Soto also write a pretty slammin’ fashion blog, geared mainly towards men’s style.

The mix of brands on offer reflects how they try to pin down the ‘modern man’. Nike and Acne nestle between handmade Mark McNairy Brouges. The space reflects this too – it’s all white washed walls, leather sofas and reclaimed wood. It’s industrial steel meets gentleman’s smoking club. So what better place to launch the clash of the lifestyle brands?

Riding the wave of the 80s surf trend Shawn Stussy and Christian Anicete found recognition after scrawing ‘Stüssy’ on their custom-made surfboards. A logo was born. After selling caps and tees out of the back of his car on Laguna Beach, they eventually became a globally recognised brand. Meanwhile, the ubiquitous Converse brand needs little introduction. Having been around since 1908, their ambassador scheme with skaters in the late 00s cemented them in the urban scene too. So, marking Stüssy’s 35th anniversary seems like a natural fit.

Their other footwear collabs have ranged from their first ever partnership in 2012, which took on a practical angle and was inspired by 1970s hiking boots. With the D-Ring eyelets and waxed boot laces, they gave urbanwear a zing of classic design. There was also the Fall/Winter 2013 collection, where the iconic kicks were reimagined in a croc-embossed fabric in black, purple and red colourways. They included Stussy No. 4 tongue labels and a interlocking 'SS' branding. It seems whichever design avenue these brands go down, their innate collaborative effort always suprises.

This time, Stüssy have taken over the Converse Chuck Taylor All Star ’70, mixing their graphic heavy heritage with the classic trainer. It’s the fifth collaboration between the two brands, suggesting there’s a synergy between the two that just won’t quit. They’ve played around with the prints, mixing digital print with touches of embroidery. The design takes inspiration from Stüssy’s iconic zigzagged ‘Tom Tom’ print, giving it a graphic twist for 2015.

So with a drink and a burger in hand, Converse and Stüssy took over Soto.  Start scanning the pavements for that zigzag print and All-Star vibe. 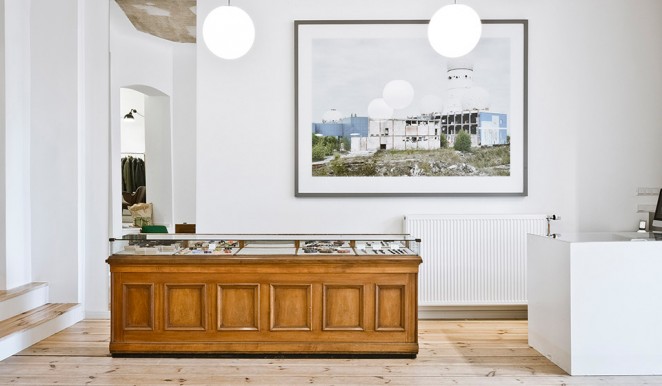 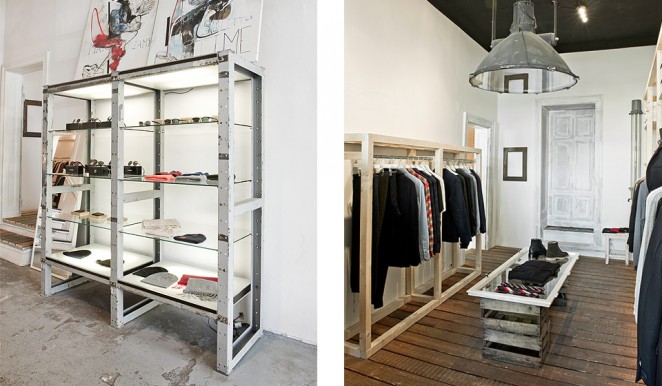 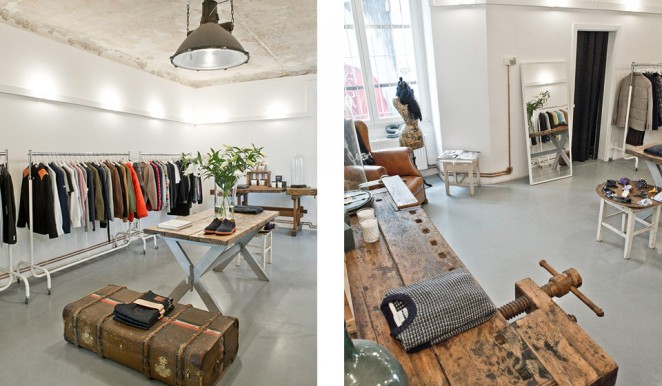 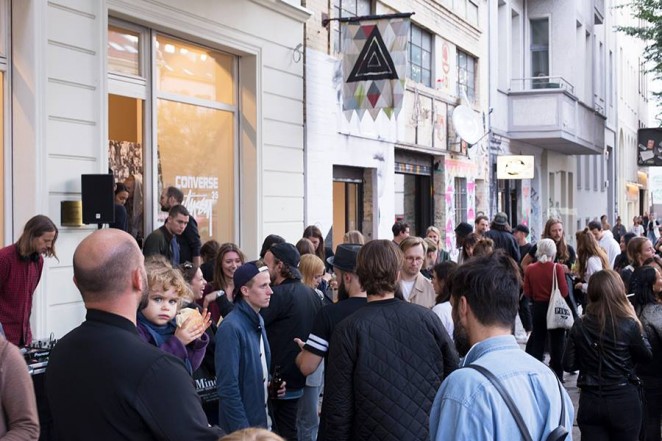 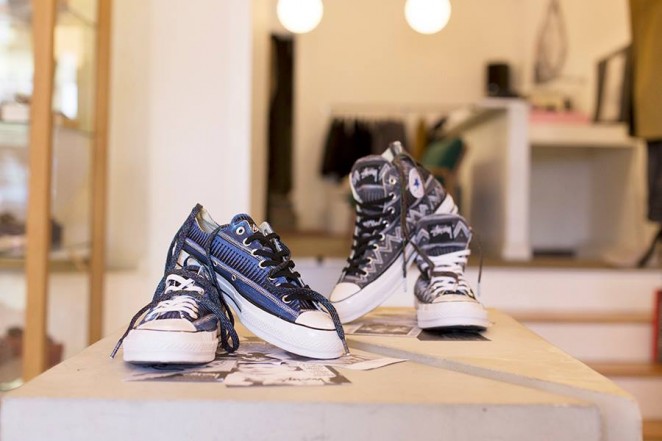 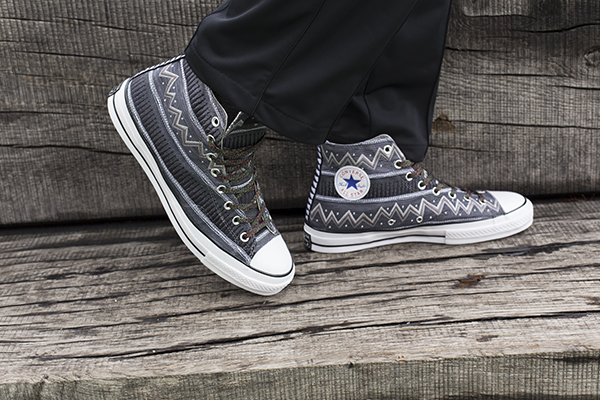 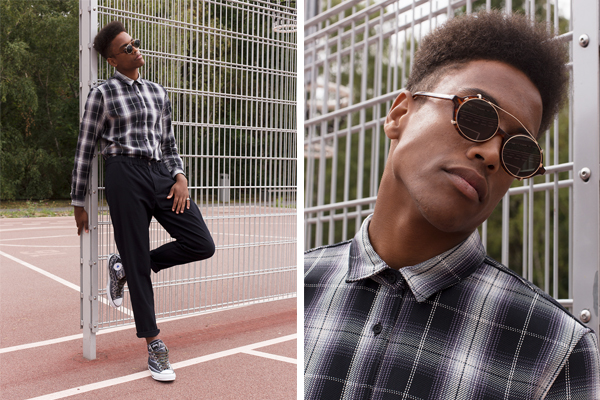 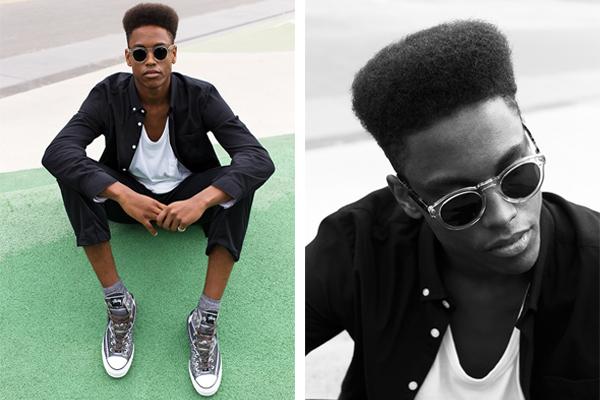 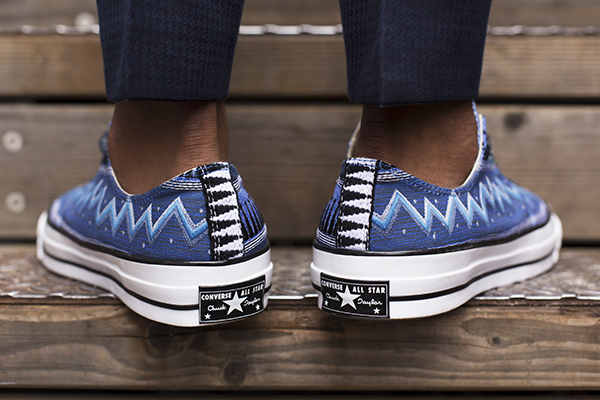