Grant Hunter was recently promoted to Global Executive Creative Director for iris Worldwide and has been working for the agency from his base in London for 15 years now.

A man with creativity in his bones, Grant is an incredibly insightful individual with a lot of love for the creative industries and some incredibly progressive ideas. He’s also a published author (of the book “Newsjacking)” and an aspiring beekeeper! We caught up with him to discuss his humble beginnings, his work, his inspirations and an appearance on The Big Breakfast that you certainly won’t be forgetting any time soon.

Tell us a bit about your role

I work in partnership with the various global office ECDs to push the quality of our creative output forward. I report to Shaun McIlrath, our Chief Creative Officer, who is a master storyteller and one of the most genuine people in this business. I’ve seen iris evolve from 70 people in 1 office to 1000+ in 15 offices. My time in Asia as the Regional ECD gave me the opportunity to experience many different cultures.

So, my iris journey has been ever-changing and it’s the agency’s constant evolution that keeps things interesting. We’ve always believed in ideas that feel less like ads and more like culture. And that’s what we still push for today. As we go into 2020 we are celebrating our 21st birthday and it feels like we’ve only just got going. The next 5 years should see us produce work that’s bolder and braver than ever.

I grew up in a tiny village. It was small. Safe. Not loads to do. As I got into my teens I longed to escape to the excitement of the city. My parents were both teachers and both artistic. My father, unfortunately, died of his second heart attack at the age of 42, I was 12. My sisters were 9 and 3 respectively. He probably didn’t look after himself as much as he should so that gives me the impetus to live a relatively healthy life. From the age of 12, I was surrounded by strong women who had a drive and zest for life.

I owe my mother and grandmother a lot as they provided security for my sisters and me. They also instilled in us the importance of trying your best and working hard. I loved art and drawing and the village had a resident who was a Graphic Designer. My mum asked him if I could get some work experience over the summer holidays. This was pre-Mac and everything was drawn, pmt’ed or cut and pasted. It opened my eyes to a way of getting paid to do something you loved. 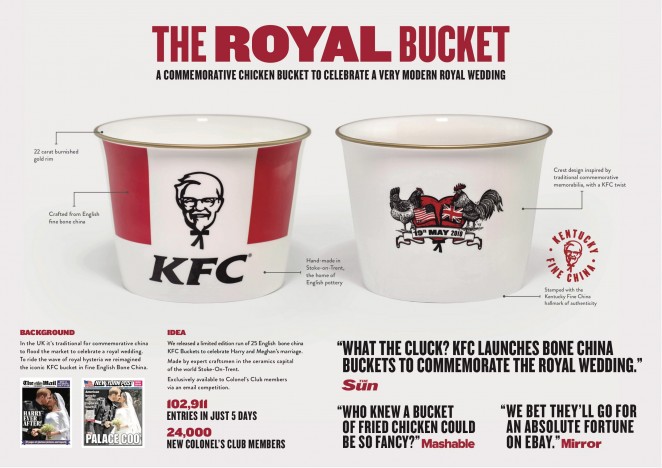 The 'Royal Bucket' for KFC

Photography was a big focus whilst I was at art college in Birmingham and if it wasn’t for our tutor John Lowe I probably wouldn’t have found advertising. He tutored Trevor Beattie, Gary Sharpen and Piggy Lines. He also had connections to people like Paul Brazier. So we were lucky that even though we were up in Birmingham we had access to some brilliant Creatives and Creative Directors. So the younger me would’ve probably been a photographer. Fast forward to today and with the planet in a climate crisis, the older me has a desire to give back, to find a better way.

I’m going to keep bees next year so beekeeping will be an addition to my LinkedIn skills. But it feels like there’s a real awakening happening at present. Moving to a circular economy is one major way we can address the imbalance in our world. We need to get on with it and it’s not too late if we collectively change our behaviour. At Iris, we are reviewing our policies and looking at how we can influence our clients to lead the charge on sustainability. Ben Essen, our Chief Strategy Officer, has been a driving force and the energy he is bringing to this issue is inspiring.

In the early years my copywriter, Simon, and I appeared on the Big Breakfast to rebrand Punch and Judy for the year 2000. Back then Johnny Vaughan was the host. We appeared on the show with a Punch and Judy guy who had been chucked off Brighton Beach because his show had some disturbing domestic violence undertones. When we turned up at Lock Keepers cottages we bumped into a guy falling out of the toilets sipping a clear liquid from a bottle. It was only 6 in the morning.

When we sat on the sofa, live on air, with Johnny we realised the guy we’d seen earlier was actually the Punch and Judy man. During the live broadcast, he could hardly stand up and almost took the whole set down as he performed his dubious routine. We, on the other hand, had an Optimus Prime Transformer figurine with Jimmy Hill’s head stuck on it. And we christened it the Punch 2000.

Campaign for All Blacks and Adidas

I think it’s difficult to continually generate original thinking. Time is our most precious commodity. We simply have less of it. The demands are ever-increasing. So it’s our duty to create space for our people and ourselves. I’m very much a positive ‘can do’ person. But there are times when ‘No’ is the right response. I’m increasingly seeing people be more open when it comes to their mental health. And the industry is becoming more aware of it. The challenge is that clients are becoming more demanding so being able to have a true partnership with them is key. The only problem is when those clients have no off switch themselves.

I admire Stefan Sagmeister’s principle of opening the studio for 7 years then closing for a year. Taking a year off commercial work feeds their creativity as they recharge, this then fuels the next 7 years of work. So finding ways to shut off is important. And finding new inputs that aren’t from the industry is a must. I do subscribe to Campaign but with its black and white power portraits of those in the adland club, it does feel like it’s stuck in the 80s. It really is the ultimate echo chamber. One particular creative source I’m enjoying at the moment is Vimeo’s Film Festival, there are some brilliant films on their shortlist this year. It’s also important to stay motivated by recharging away from the office and for me, physical exercise is the best mental recharge. And it keeps the heart in shape, of course.

Getting the Newsjacking book published by Thames and Hudson, but more importantly - putting the ’Urgent Genius’ theory into action. Firstly, with the all blacks and Adidas within 5 mins of the team completing the perfect season, with 14 straight wins, we changed the all blacks’ site URL to wwwwwwwwwwwwww.allblacks.com and more recently creating a bone china bucket for KFC to celebrate the Royal Wedding. And talking of cultural moments leading the design team for the London 2012 Olympic and Paralympic mascots was a once in a lifetime opportunity. 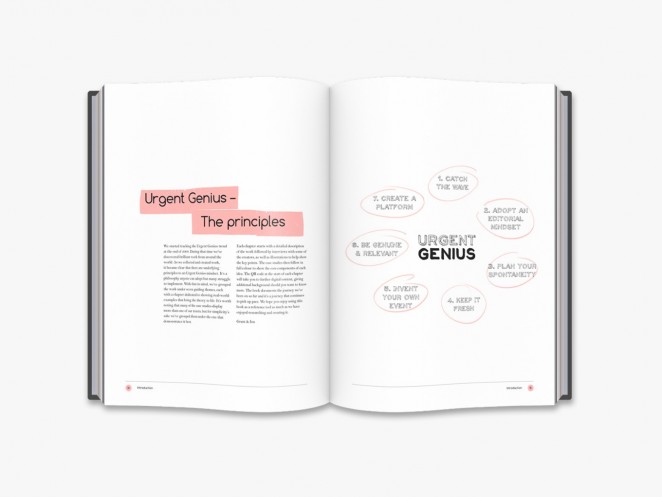 Our industry needs to rediscover its creative confidence. Ads are being rejected but creativity isn’t. The shape of our ideas is changing and that’s exciting. We need to create things that people want to hang out with. It’s not easy. It’s never been easy. It’s competitive. It’s always been competitive. So relish the competition and let’s challenge one another to create ideas that people want to binge on.