How London responds to a Tube Strike

Nothing strikes fear into the heart of London commuter like the prospect of another tube strike, and last Thursday (August 6) the darkness descended once again, sending the city into mild spasms of chaos! However, if there's one thing Londoners are good at, it's making the best out of a bad situation, and last week, whilst many commuters were venting their rage online (as hilariously brought to life by the rather aptly named “Fucking Tube Strike” interactive map), London's advertisers took advantage of the situation in a big way. Here I'll be looking at a few of the wittiest examples which used the #tubestrike hashtag to make the most out of the chaos.

The deodorant brand struck onto a real winner with their tube-themed creative by DLKW Lowe, which reimagined the famous London tube map as an image of a bicycle and a scooter. The idea was to use the tube lines to create alternative modes of transport, which is an idea that could quite easily be built on during future strikes (in fact, the same campaign was first used during last month's strike). The work featured the line “However you beat the tube strike, Sure keeps you fresh with every move,” which tied neatly in to the brand's current “Stay Fresh” brand positioning. Also, it was pretty humid last week, so reminding commuters to keep their perspiration in check was always going to be met with approval. 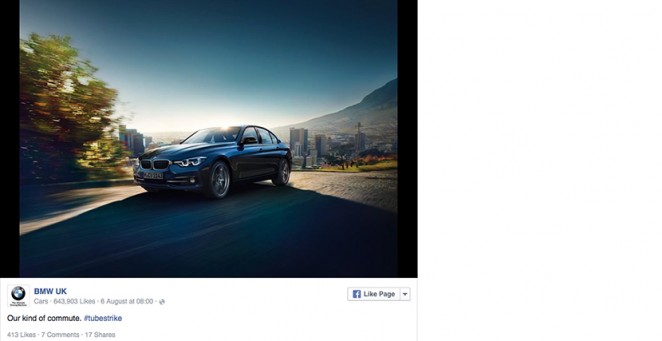 The automotive manufacturer decided to go the smug route with a simple picture of a luxury BMW above the tagline “Our Kind Of Commute.” Of course, the reality is that anyone driving to work last Thursday probably would have spent a good few hours stuck in traffic (and that's a conservative estimate), but I get what they were trying to do here. 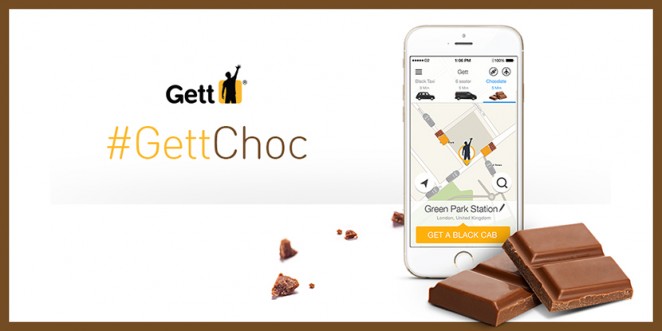 Cadbury teamed up with the transport app Gett (think Uber, only with black cabs) to offer Londoners frustrated by the strike free chocolate in an effort to promote the brand's new Twirl Bites. The company made good on their promise to deliver a sharing bag of Cadbury Twirl Bites to users’ homes or offices within 10 minutes in and around the city centre between 10am and 3pm. The chocolatey treats were delivered by motorbike and those lucky enough to claim a free bag were encouraged to share their experience with the #GettChoc hashtag. Remo Gerber, Gett’s UK chief executive, said: “We understand that the tube strikes can cause extra stress and hassle for many Londoners travelling around the city. This is a fantastic opportunity to offer our users something that will truly brighten up their day. We are delighted to be getting Londoners free chocolate with a simple tap of the Gett app.” Gett were also running a free ride initiative, which allowed stranded commuters to book their first ride for free if they quoted a code when booking.

The sports giant created their own #boostlondon hashtag, which encouraged the audience to post about how they battled the commute on their feet. Of course, encouraging fitness fanatics to tell other people about their workout is like shooting fish in a barrel, so Adidas got this one absolutely spot on.

The gym franchise made big waves during the July tube strike when they opened up their facilities for free to commuters. All they had to do was show their Oyster cards and they were allowed full access to any of the 45 London-based Fitness First gyms. The same initiative was put into effect last week with the rather catchy tagline “The tube gates are closed but our doors are open to ANYONE who has an oyster card.” Of course, Fitness First was far from the only brand to use the opportunity to give away free stuff. The restaurant chain Strada also jumped on the bandwagon by offering all London commuters a free cup of coffee! Considering how expensive the average gym membership is though, I think the FF deal is a step above a lukewarm cappuccino.

Renault really went the extra mile by actually putting on a free shuttle service for stranded commuters. Their Twizy cars were roaming the London streets between key commuter tube stations, with lucky commuters able to hail one down like a black cab. The poster campaign that ran alongside the initiative looked more than a little familiar though, using effectively the same idea as Sure, only turning the tube map into a Twizy car instead of a bike. The idea was conceived and executed by Publicis London with Manning Gottlieb OMD handling social activation.

The smoothie makers jumped on the #tubestrike bandwagon by doling out humorous advice on how commuters might find alternative travel. Using a well-known London transport template and rebranding it produces a similar effect to Sure’s, although with a slightly more light-hearted tone. It's not quite as pretty or eye-catching as some of the other ideas, it's certainly one of the more clever campaigns. 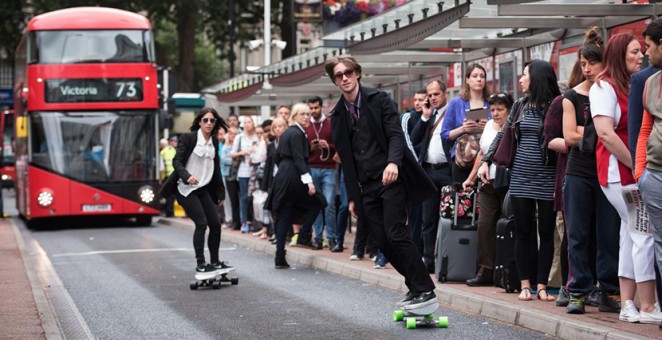 Whilst I'm certainly not condoning the use of skateboards as a legitimate alternative to the tube (especially if you've never ridden one before), perhaps the coolest freebie offered to commuters last week came from boutique skateboard makers Penny Skateboards, who offered up a batch of free skateboards! Of course they went within minutes. Did you manage to get one or know anyone that did? If so, I'm rather jealous, especially considering they usually retail for over a hundred quid!

Benjamin Hiorns is a freelance writer and musician from Kidderminster in the UK. Mercifully he wasn't in London last week, though that didn't stop his Facebook feed from imploding with angry commuters.