Say what you want about adland, but it's always been an incredibly progressive industry, so it's only natural that many of the industry's biggest and best agencies and brands would want to piggyback on the social media frenzy surrounding International Women's Day. The idea behind this annual international celebration of the social, economic, cultural and political achievement of women is to help accelerate gender parity in parts of the world that still haven't woken up to the concept, and this year, the organisation achieved this through the #PledgeForParity hashtag. Here I'll be taking a gander at some of the most inventive and socially conscious activations that were released yesterday (March 8) to coincide with the event. If there are any particularly strong ones you think I've missed, feel free to add them in the comments below!

To mark International Women's Day, DDB Worldwide announced the launch of the “Talent Has No Gender” social campaign; a call-to-action that supports DDB's commitment to promoting gender equality throughout the global agency and the wider advertising industry. The campaign encourages everyone in the 2,000+ DDB employee network to change their profile pictures and abbreviate their gender-defining first names on LinkedIn in order to appear genderless. When people upload the new image and name, their account will post an update to the timeline of every one of their connections, encouraging others to get involved by visiting TalentHasNoGender.com, the multi-platform execution also appears on Facebook, Twitter and Instagram. The website includes a video (above) featuring male and female leaders, clients and partners across the DDB Network discussing and defining what talent looks like, how talented people thrive, and lessons learned on inspiring talented people, supporting DDB's belief that talent depends on many things, but gender isn't one of them.

“Our goal is to recognise pure talent in our industry and take gender out of the equation” Wendy Clark, President and Chief Executive Officer of DDB North America

The website also includes a profile image and upload instructions, as well as a link to purchase bespoke t-shirts. In addition, the site will be live streaming IWD events across the network, including the OmniWomen CEO panel. A social stream will capture inspirational messages across DDB's channels and the industry at large using the #TalentHasNoGender hashtag. The site also shines a light on Better By Half, the gender balance initiative from DDB US, which brings men and women together, at every level, to discuss and find opportunities to improve the issue within the industry. Finally, DDB will be kicking off an “Unconscious Bias” training program with an initial focus on its most senior leaders and those in a position to hire across North America. Serving as a foundational pillar for its diversity and inclusion strategy, DDB has plans to offer all employees in-person training opportunities supported by e-learning tools to mitigate bias and raise awareness. On a smaller, more local level, meanwhile, Adam & Eve/DDB changed its name to Eve & Adam/DDB for the day as a means of pledging support to women’s equality in the industry. So as you can see, DDB has made a genuine, concerted effort this year, which honestly puts a lot of other agencies to shame.

The staff at Innocent, the smoothie, juice and healthy snack company, effectively trolled the frankly ridiculous BIC “For Her” pens on their social media profiles yesterday by underlining just how backwards the idea of a pen designed to be used for by women actually was. If you haven't heard of these pens (lucky you), they look and act just like normal pens, only they come in pretty pink boxes. It's like something out of the 1950's and it actually makes my blood boil. After receiving some of the offending pens on International Women’s Day, the ladies at Innocent Drinks put their special new toys to good use and basically took the piss. Kudos ladies! 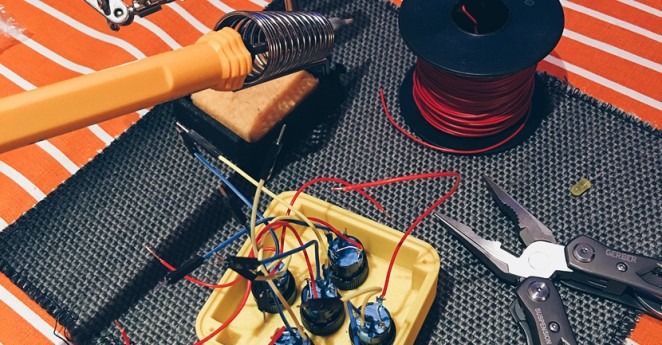 DigitasLBi hosted a creative tech workshop for a group of girls from the Camden School for Girls, during which the girls got to play around with virtual reality, Arduinos (the open-source electronic prototyping platform that allows beginners to easily create interactive electronic objects) and robots. Sounds like fun to me! More fun than school anyway. 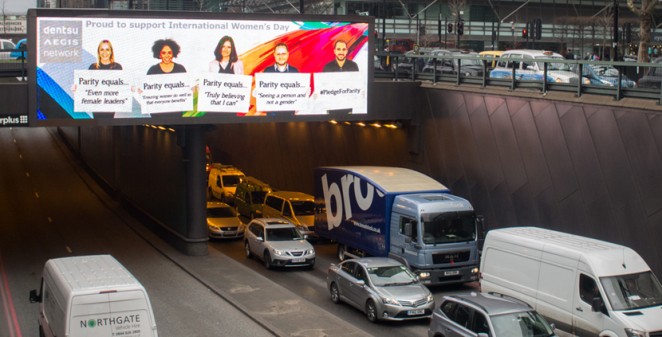 The Dentsu Aegis Network launched an OOH campaign featuring female and male staff sharing what #PledgeForParity means to them, which ran across prominent sites around its office including the Euston flyover from yesterday. The agency's meeting were also renamed after female digital pioneers, such as Ada Lovelace. Later in the year, staff will also be asked to choose new names of diverse, inspirational people to rename the rooms permanently.

As part of a campaign to promote the 10,000 Women project, which provides business and management education for women in developing countries including China and Afghanistan, the Wall Street bank of Goldman Sachs is running Snapchat ads alongside editorial content in four Discover channels: Refinery29, Vice, BuzzFeed and National Geographic. According to Snapchat, it's the app's first content-related ad buy across Discover channels, and was put together after Goldman Sachs created the campaign's idea and creative. The campaign uses Snapchat's long-video format, and swiping up an ad pulls up a three-and-a-half minute long video. The ads will also run in the International Women's Day Live Story; the string of photos and videos collected around live events. The campaign is the second time the bank has advertised with Snapchat. Last year, the brand ran ads within Live Stories located around college campuses as part of a recruiting push.

“Snapchat allows us to reach an important audience in real time and join a conversation about how to empower women in emerging economies” Amanda Rubin, Global Co-Head of Brand and Content Strategy at Goldman Sachs

Liz Wilson, the Chief Operating Officer at Karmarama, hosted a panel yesterday to celebrate the occasion that included representatives from Sport England and Women@Google London. The women discussed their experiences facing adversity and gender barriers. 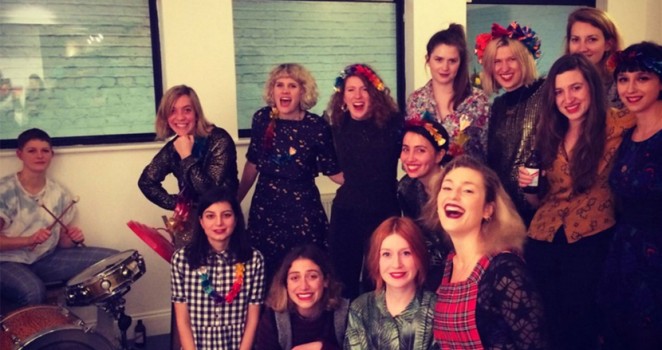 Razorfish London hosted a “Party for parity” to celebrate International Women’s Day with comedy, music and networking. The event included performances by Hackney acapella Deep Throat Choir (as seen above) and the comedy troupe All Made Up. Far from just another day at the office then.

International Women’s Day 2016: What are you going to make?

Microsoft introduced “Make What's Next” as part of an effort to encourage girls to enter tech fields that's timed to coincide with International Women's Day. They ran the ad created by M:United, the bespoke Microsoft arm of McCann, during high profile shows including “Good Morning America,” “CBS This Morning” and “Today,” picturing young girls talking about why they love science, but failing to name any inventors besides men. A montage of creations by women followed. Naming a famous female inventor might be difficult for many people, as only men show up in Google's carousel search results when the term “Famous inventor” is searched for. According to the World Economic Forum, the gender gap in computer science won't close until the year 2133. Microsoft is encouraging girls to speed up the process by participating in its YouthSpark programs around the world, and has also created an online hub for inspiration. As part of its initiative, Microsoft also announced a patent program that will give select female inventors support in patenting their ideas. The idea is to address the reality that women hold only 7% of patents and just 15% of inventors in the U.S. are female.

“We want girls to know that there are women out there that have made amazing things in whose foot-steps they can follow” Kathleen Hall, Corporate VP of Global Advertising at Microsoft

TBWA has released a campaign called “Take the lead,” to recognise women’s issues as everyone’s issues. It includes a two-minute film (above) in which men from around the global TBWA network read anonymous quotes from their female peers, such as “People think I’m bossy when I have an opinion,” and “Having a kid hurts my career.” The campaign is part of TBWA’s Project 20\20, which launched last year and challenges the network to increase women in leadership roles by 20 per cent by 2020.

The Happn dating app has partnered with Equality Now for a campaign raising awareness of the statistic that one in three women worldwide have been victims of physical or sexual abuse. Upon opening the app, instead of seeing the usual timeline of people they’ve crossed paths with throughout the day, users will see images of models portraying female survivors of violence. The “One in three” campaign will run in 21 cities around the world, including London, Paris, Hong Kong, Madrid, New York, and Sao Paulo.

This is Beating the Odds

Western Union supported International Women’s Day through their support of a young South African woman named Siba Gqirana as part of their ongoing Chain of Betters project. Siba’s dream is to become one of the country’s first female commercial pilots, a big ask in an industry where more than 95% of the world’s pilots are male. This isn’t made any easier by her family’s economic situation; they’ve been giving everything they have to help Siba achieve her dream, but even so, paying for training was expected to take years. Impressed by her dedication, Kara Hatzai, a female commercial pilot in Chicago, nominated Siba to be the next person in Western Union’s Chain of Betters competition; a project to explore and celebrate the power of Western Union’s “Moving money for better” positioning. Without telling Siba, Western Union transferred all the money she needed to finish her training in months, and as a second surprise, the company flew in her family from the township she grew up in to celebrate.

“International Women’s Day sees Chain of Betters align with the globally prevalent subject of promoting gender, a topic close to our heart as an agency” Ross Jenkins, Global Managing Director at MullenLowe Profero

In addition to Siba’s inspiring story and the monthly betters awarded as part of the regular competition, Western Union will award five further betters of $1,000 that will go to the best ideas that benefit education or social improvement for women or girls anywhere in the world. Created by mcgarrybowen London, the campaign is brought to life through a film, which has been distributed by MullenLowe Profero via various social media channels and publishers driving to the Chain of Betters microsite. Profero has partnered with TED to amplify the impact of Siba’s story across forward-thinking audiences. This is supported by placements around content typically associated with male dominance to further raise the profile of aspiring women.

“Creating the Chain of Betters competition with Western Union is hugely rewarding, and it was befitting to launch the film around International Women’s Day, which celebrates the achievements of women as well as raises awareness of the need for gender equality across the world” Louise Lang, Group Account Director at mcgarrybowen

We Believe in Her

Finally, Procter & Gamble released a pretty emotional film for International Women's Day called “We Believe in Her,” highlighting its many powerful and provocative brand campaigns that have given a voice to issues that affect women. The Fairy liquid brand also dropped the 'y' from its name and released a video by Grey London about whether men share a fair amount of the workload around the house.