Behind the Idea: finding simplicity in Guinness Night Football

Expanding the reach of a brand to a new segment of audience can be a tricky challenge to overcome, as it is arguably easy to make false steps and set yourself off to an unpleasant start. It is also just as easy to overshoot and aim for too much complexity. How do you find that sweet spot?

It is the case of the Guinness Night Football campaign by HeyHuman, which, in the words of the agency's ECD, was aimed at "giving Guinness a place at the table with Africa's younger drinkers."

We had a chat with Shnoosee Bailey, executive creative director & managing partner at HeyHuman, to dig behind the idea and understand what brought Guinness Night Football to life.

We were tasked with giving Guinness a place at the table with Africa’s younger drinkers - specifically those aged between 18 and 34. Traditionally, Guinness can be seen as quite a challenging drink. It’s a rich, deep beer that isn’t usually associated with this generation. The brand already had a strong, existing connection to football in Africa, and we needed to continue building on that, ensuring that Guinness was still seen as the football beer.

The tricky part about doing a campaign around football every year is finding an original one. There’s just been so many amazing ideas - especially with alcohol brands - that it’s tough to find something that feels original, and importantly, something only Guinness can do.

Once we landed on the concept of Night Football, though, it just felt right. It takes football as you know it, and puts a twist on it; instantly, the beautiful game becomes an identifiable brand asset.

It was the right choice for many reasons - one of those being its simplicity. Night Football was a manifestation of the liquid itself, often described as a colourful, vibrant beer, despite its darkness.

It’s football, at night, with the pitch bathed in fluorescent light. That, combined with the energy of the players and fans; the visual spectacle; the brilliant detail of holding a Pan-African event in Nigeria’s Legend Hotel Lagos airport hangar; the fact Rio Ferdinand was hosting, and so much more was what transformed the game into an even more visceral experience.

Throughout the planning process, ideas normally get altered, twisted and tugged by all manner of stakeholders. With Guinness Night Football, despite the sheer number of people involved on the project, the work stayed true to the original concept. Which is rare. 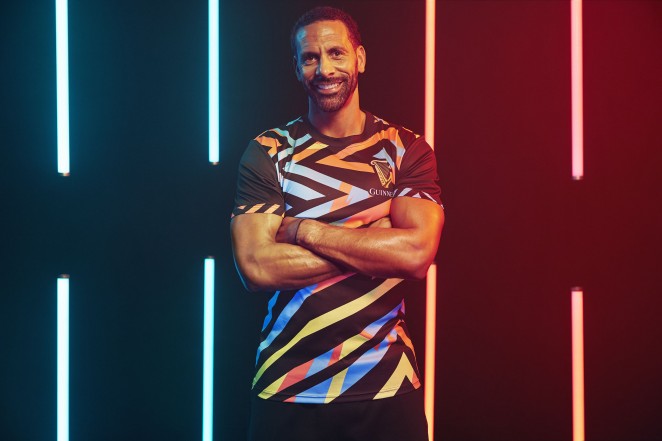 It all went relatively smoothly until, like any event, the last minute. It went down to the wire, especially with all the influencers and musicians we wanted involved. We had some drop-outs and switch-ups, which can always be a headache, but that’s to be expected with live events!

Luckily, Rio is fantastic to work with, and was a real blessing to the project. He’s not one of those people who’s happy to just slap his name on something and leave it. He really gets stuck into the work and is willing to help, so having him compère the event and engage in some of the football challenges was brilliant.

Guinness isn’t this illusive, challenging drink. Despite its darkness, it’s a colourful, vibrant beer that can be enjoyed by people across all walks of life.

We were really helped by the Flavour Rooms project we had done the year before. With that, we’d made Guinness the most talked-about brand - not beer brand, but overall brand! - in Nigeria, and swept up 75 percent of the share of voice in that country. With that in mind, we knew it was important to make this event bigger and better than anything else we - or competitors - had ever done.

The energy and vibrancy was just so apparent. The music, the dancing, the neon - it all fits perfectly with the younger African market.

It was also quite a coup getting musical acts from across the continent, too. We had Davido from Nigeria headlining musical proceedings; we also had Salatiel from Cameroon, Bebe Cool from Uganda and the group Sauti Sol from Kenya all performing and participating in activities. This helped give it a local, relatable feel.

It’d be easy to say Rio, just because he was so hands-on and really helped give the event even more credibility from a football perspective. But honestly, I think the creative did an equally good job at cutting through. There’s never been football like this. It’s a totally new way of viewing both the sport and Guinness.

It was a big beast - it took between six and seven months from initial conversations in Summer 2019 to execution in January 2020. And it really shows!

We just want to keep shifting the perception towards Guinness as an option for all drinkers. New generations are discovering it, and it was clear everyone at the event had a blast - so I think we succeeded in associating Guinness with having a good time!

It feels amazing. It looked fantastic, we had some great influencers on board, and it was a tremendously successful event. I’m proud that the idea never got watered down at any stage in the creative process. It’s testament to the strength of the original Night Football idea, and it epitomises the Unusual Everyday philosophy that guides everything we do at HeyHuman.

Night Football is something only Guinness could pull off. Whenever we talk with the brand, we always discuss bringing colour out of the dark, because that’s exactly what the drink does. The two things are just intrinsically linked, and that’s what we did with Night Football - made a neon rainbow in the night.