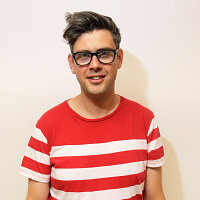 Mental health charity Chasing the Stigma (CTS) teamed up with Mashbo to create a digital platform that brings grassroots and national mental health services together in one place so that - using the location of the web browser or mobile device - anyone, anywhere can find the nearest source of support for any mental health issue, from depression and anxiety to PTSD and suicidal thoughts.

The web app was developed in conjunction with CTS's founder, Jake Mills, a suicide survivor who has experienced depression and loneliness first hand. The target audience and strategy behind the Hub of Hope has no restrictions on age, gender, sexuality, or location - making it easier for people to find the right mental health support for them.

The bright colours and minimal design, combined with the easy to use UX is focused on making the web app accessible to users who may be feeling distressed.

The user can select ‘find nearby services’ and, by using their Internet enabled device's location, the app will display the help available. If they are looking for support in a different location they can enter a postcode and search.

Users can also add filters to deliver results for specific mental health issues. There is also a 'Talk Now' button at the bottom of the page that sends the user straight through to the Samaritans who are also endorsing the Hub of Hope.

The Hub of Hope's biggest success has been the hope that it has given thousands of people and its place as a vital stopgap for those on the 5 to 6 month NHS waiting list for mental health referrals.

Since the launch of The Hub of Hope in July 2017 it has received over 10,000 unique visits from 751 different cities and towns across 59 countries. More than 7,500 of those users are engaging in over 300 UK locations. The Hub of Hope currently has over 1,000 validated support networks registered on the web app and an app store version of the Hub of Hope to facilitate the engagement with younger users is imminent.

Gavin Sherratt has been a Contributor since 9th February 2017.

Chasing The Stigma's Hub of Hope