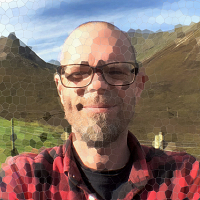 All design (incl. character design), illustration, asset creation and animation by me unless otherwise stated in Tech Breakdown.

The minimal sound design by me.

Final Reel composition/edit was put together using After Effects. This seems to be a bit of a "sticky wicket" as far as Motion Designers are concerned and a lot of people recommend creating a demo reel in Premier or other editing specific software.

I am way more comfortable using AE and wanted to create some interesting transitions that would not have been possible or unfamiliar to me in Premier.

00:00 - 00:02
I wanted to see if I could recreate the Netflix animated logo and decided to use it with my logotype "GMPRODUCE". 3D element was created using Cinema4D and spliced together with the red type animation created in After Effects.

I don't get to use Cinema4D as much as I'd like to and wanted to gain some confidence with some 3D. I also added some subtle colour to the borders as the original was just white with a mono vignette. Audio is straight ripped from the Netflix logo animation.

The silhouette of the guy zip-lining with a camera was a puppet rig I made for an older animated logo as was the TV at the end.

I created the silhouette artwork in Illustrator and brought the layers into AE and parented the layers to create a puppet. This was keyframed in AE. I used animated Null objects to create the movement along the zip-line.

The zipline then presented a great way to transition to the next scene and was created using animated masks and two duplicates of the Netflix comp/layer.

00:02 - 00:07
This is a little nod to School of Motion anyone familiar with Animation Bootcamp will recognise the project. I was really happy with my interpretation and decided to use it as a title screen.

This was achieved using advanced keyframe easing. The animated text movement is my recreation of the animated type from the opening credits of BeKind Rewind. (the last type animation which is "Written and Directed by Michel Gondry" if you want to compare)

I just loved the way the type moved and wanted to try and emulate it. This worked out great and I decided to modify it for use as the “twenty twenty two” part of the title sequence. Gondry is a bit of a hero of mine too.

Animated this using type layers in AE broken up into separate parts, put together and keyframed in reverse using the original film footage as a guide for pacing . To put a bit a bit of extra sauce on it I chose to make them 3D layers and offset them in Zspace, animated a simple camera move, chose the green colour casting and added some venetian blind effects… Bob is your proverbial uncle.

The glitching is hold keyframed warping effects and the chromatic aberration I used to accent the text flying off-screen is all done manually using duplicated comps with some layer blending (add or screen, can’t remember which), reduced opacities and red/blue fill colouring. I do have DEEP GLOW which would’ve been a bit more convenient but I found creating the aberrations manually gave me more control when it came to animating them off-screen.

00:07 - 00:15
One of my first big projects. An advert I created for Protocol Collagen. It had some elements which fit quite nicely with the DJ Shadow track and I modified the type animations to sync up with the audio "Ladies and Gentlemen". It also has some nice transitions with some Trapcode Particles which at the time was my first attempt at particle wrangling.

This time it was a ball bounce exercise which I elaborated on with some bouncy text, all animated by hand using advanced keyframe easing techniques. Tweaking those animation curves is where it’s at! Like eating chocolate.

Text modified to fit the reel audio. I also used some of this same comp for the outro "Thanks for watching" just to showcase my advanced manual keyframe animation skills in creating realistic, lifelike movements of the type smashing, spinning and falling off-screen (see outro).

00:15 - 00:16
This is an animated LED screen which created for the Devil's Stadium in Newark NJ, I'm a bit of an Ice Hockey fan so this was kind of a big deal for me and it was great to know this would be used on large screens outside the stadium.

The unconventional screen size meant I had to use 4 duplicates to fill the reel’s 16x9 format. Offset the timings to give some pleasing movement and keeping the whole reel rolling along. Ad was created in AE using graphic elements supplied by the client. Animated again by tickling those curves.

I also had some similar previous LCD screen animations to use as a pacing guide, style of type animation and how the overall art direction should look. All artwork elements supplied by the client except the stadium lights at the start which are stock from Getty (I think) or possibly Shutterstock, it was a while ago now.

Add yourself to this project
studiopro:Gary was verified as a studiopro on 14th September 2022 Pro member:

Gary Meredith has been a Contributor since 5th February 2021.

Hi Ani and Ken, thanks for your kind comments!