Bring your world together – The making of our new TV ad

Meet Sarah and her Grandpa in TouchNote’s latest TV campaign. They’re keeping in touch across the distance with personalised postcards as Sarah sets out on her first big adventure.

Summer is a busy time filled with travel plans and making memories. TouchNote wanted to do their part to remind folks to stay in touch and share those moments with loved ones, no matter where they are in the world.

In what is TouchNote’s biggest TV campaign to date, the crew flew out to Los Angeles and Hawaii to find the perfect people and places for the shoot. Take a look at how it all took shape.

Before the shoot
Once scripts were finalised they were storyboarded for the director Kyle Hausmann-Stokes and Radley Studios to bring to life. 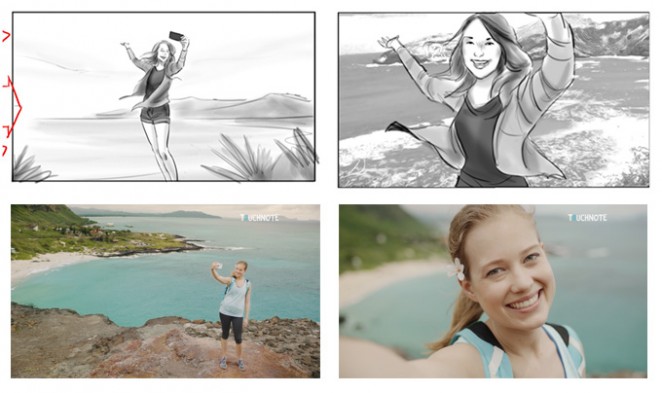 Dozens of actors read for the roles of Grandpa and Sarah so TouchNote could find the best match.

To set the scene for Sarah growing up alongside her well-travelled Grandpa, the perfect home was needed for him. A bohemian, 50s ranch house was uncovered just outside LA, filled with trinkets, exotic knick-knacks, a wall-filling map of the world, and Kilim rugs.

On set
After sourcing the best locations, extra care was taken to make sure they were captured in the highest quality. The resulting images were then colour-graded to bring out the best in the shots.

To capture Sarah’s feet in the ocean, the actor had to be kitted out with a body-mounted camera rig.

It was essential that the mobile application’s ease of use came through strong in the ad. To do this the UI was overlaid on the footage of Sarah out and about. This proves a simple yet highly effective way to convey how easily TouchNote fits into her active lifestyle.

Take a look at the full ad below