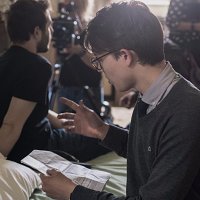 This reel shows excerpts of media projects I have directed since 2012, these include fiction films, commercial work and documentaries. These films were shot in various countries and languages. You may find the full list on my IMDB page and on my linkedin profile - .

Several of the clips used in the reel are extracted from videos available online. You may watch a few of them below, from latest to oldest:

The music track is "Sun" by Caribou - No copyright infringement intended.

Back to Directing Reel project