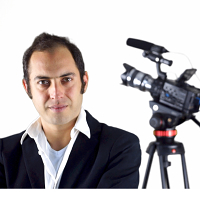 We are a video production and photography company shaped in Vienna, Austria and based in Ankara, Turkey focusing on international networking and providing video production services to a wide variety of clients from British Media Agencies to European Union Projects in Turkey or European businesses in Europe.

Here’s one of the documentary films that we have produced in Turkey for the European Union.
(See Projects Section)

Having completed over 40 European Union and internationally funded Video Production and Photography projects we are specialized in producing documentary films, success stories, video journalism interviews feature videos and many other forms of audio visual media for international projects in Turkey.

Here’s the playlist of the Success Story Shorts that we have produced in Turkey for the European Union.
(See Projects Section)

Within that scope we make interviews using professional multiple cameras, microphones and lights in which we are analyzing the news and articles that are published in Turkish media, as well as providing English translation services with timecodes for non-English interviews.

Here’s the playlist include the previews of the interviews that we have made in Turkey for some British Media Agencies and the European Union.
(See Projects Section)

As we are truly interested in personal stories of the people around the World, we often make “portrait” videos. Below is the link to a portrait video that we made for an Austrian grafitti artist from Vienna in which he demonstrates his skills and talks about what he’s doing.
(See Projects Section)

Last but not least we produce short videos of the historical and touristic places for social media,
(See Projects Section)

We would like to let you know that we would be very happy to collaborate with you on your international projects especially supporting your projects in Turkey as a solution partner or providing you with freelance work force.